What I've been feeling on the Democratic response to the tax bill is really, really uncomfortable every time somebody says, "This is a tax hike on the working class," even though that is true in a completely nonmystical sense, because people are mostly not going to see it until 2024, if ever. Whenever the IRS figures out how to implement this thing, in March or April if they're lucky, people who study their pay stubs are mostly going to notice that they really did get a tax cut, just as Trump promised they would, and they're going to think we're liars or hysterics.

Which is where I find myself intersecting with this piece by John Judis for TPM:


I don’t buy the argument – voiced by Democratic pundits, political consultants, and even a few economists – that the bill will doom the Republicans to defeat in 2018 and even 2020. Like many things I read or hear these days from liberals, it’s wish fulfillment disguised as analysis.

Though I really don't understand the emphasis on what the "bill will" do as opposed to what the Democrats should or shouldn't do with it. If the 2018 election was going to be this coming Tuesday it seems clear that Republicans would really lose in a wave, because they hate the bill, but they don't know what's in it, and hardly anybody believes they'll see a cut, which is wrong, and partly a consequence of Democratic messaging.


According to a WSJ poll, 17% of Americans think they will pay less in taxes.

That's a lie too, when it leaves out time qualifications; some proportion of Americans approaching 80.4% will pay less federal income tax for a while and then it gets worse, out into the edges of the foreseeable future, unless Congress goes back to fix it, for all but the wealthiest 20%. 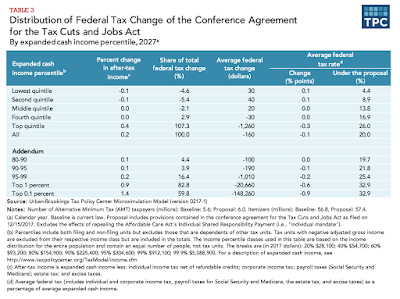 But the election is 11 months and as many as 12 or 16 paystubs away from this week's perceptions, and years away from the moment when our taxes are scheduled to rise.

On the other hand, most people don't study their pay stubs and won't know one way or the other, as we learned in tax cuts during the W. Bush and Obama administrations, but everybody's inclined to feel they're paying too much (especially when they look at the really scary lump of the federal insurance payments, for Medicare and unemployment and Social Security, the things that this bill doesn't change at all). And as you see above even at the beginning it's going to be less than $60–$70 a month for most people, less than $100 a month even for the better-off fourth quintile (though I imagine that average is on a pretty wide spread between people who get a pretty nice break and those who have to itemize deductions and might see their taxes rise substantially right away). Let's go to a nicer restaurant than usual, Trump's picking up half the check!

So to me the lesson is not that Democrats should avoid talking about the tax bill, as Judis seems to suggest, but that we should be pretty careful not to overdo it, and especially not mislead voters into fearing a disaster that won't come.

For example the thing about the devastating automatic Medicare cuts of up to 25% that would be triggered by the increased deficit under "pay-go" rules. That was never going to come anywhere near happening, any more than it happened any of the times it was possible over the past 17 years, unless the Republican congressional leadership really fucked up (it still could, because the Republicans can't waive the cuts on their own, and Democrats want the Republicans to pay something for their cooperation), and it was a silly and self-defeating waste of energy to try to frighten everybody about it.


We saw something similar with the Affordable Care Act, where the bill was unpopular and a political liability for the Democrats who had voted for it. This, too, had to do more with the process than the substance, and also with who won the media war and what news sources the people chose to believe. It took several election cycles for Obamacare to become popular...

Thinking about the Republican attack on the ACA is a useful way of looking at the problem, I think. It was extremely effective over a considerable time period, though sunk in the end by the attackers' need to lie about everything. A similarly broad-based assault on the "Tax Cuts and Jobs Act" would be able to rely entirely on the truth:

And beyond this week's little flurry (see Steve's piece) of thousand-dollar bonuses being paid to the employees of Comcast and AT&T and the like in an apparently direct solicitation of the Trump administration to approve of whatever skullduggery they have in mind.

AT&T? Got a big merger pending.
Wells Fargo? A new massive scam every week.
Boeing? Been sucking up to DJT since he was inaugurated. Now in a trade war with Canada.
Fifth Third Bancorp? Its chief legal officer might be going to the FDIC.
Coinky-dink https://t.co/VLBsk5u43O
— Charles P. Pierce (@CharlesPPierce) December 20, 2017

I don't see what's going to happen between now and November 2018 that's going to make it look like anything bigger, and if you think I'm wrong I know about a job at Carrier Air Conditioning you should apply for.

This is Trumpery, and everybody's starting to get familiar with it except for the deadender Bannonites who are just as likely not to vote in a congressional election anyway, as we should have learned from Alabama.

So all in all I absolutely think we ought to allow ourselves to talk about the tax bill all we want, as long as we don't talk about it in apocalyptic terms. It's large in size and injustice, but it's really very petty. It may not even be that hard to fix if we get to it soon.