Hot take from Mr. Bret Stephens proposing to reveal "The Real Russia Scandal"—the real reasons behind the otherwise impenetrable mystery of why our president is so darn intent on doing nice things for President Putin, which can't be, as Trump's "apologists" suggest, because he's simply "right to try to find common ground with Russia" or "merely naive" like George W. Bush in 2001 or Barack Obama in 2009 (who was actually working, as people like Stephens never remember, to undercut Putin and build up the profile of an alternative power figure, President Dmitry Medvedev):


The better explanations are: (a) the president is infatuated with authoritarians, at least those who flatter him; (b) he’s neurotically neuralgic when it comes to the subject of his election; (c) he’s ideologically sympathetic to Putinism, with its combination of economic corporatism, foreign-policy cynicism, and violent hostility to critics; (d) he’s stupid; or (e) he’s vulnerable to Russian blackmail.
Each explanation is compatible with all the others. For my part, I choose all of the above — the first four points being demonstrable while the last is logical. But let’s have that conversation at another time. There’s no need to obsess about electoral collusion when the real issue is moral capitulation.
Translation: There's no need to talk about legal actions that could help us rid ourselves of this most corrupt administration in our history when we could be taking the opportunity to moan, in heartrendingly plangent tones, over the terrible decay in our public virtue.


The constipated "neurotically neuralgic" suggests Bret's really phoning it in and not entirely sober. Oh and electoral collusion? What electoral collusion? Stephens hasn't mentioned that at all until this very last sentence. Perhaps that's because he thought he definitively took care of it on Wednesday:


we should also know that the wish tends to be the father of the thought. What if Mueller comes up short in finding evidence of collusion? What if the worst Mueller’s got is one bad tweet that, maybe, constitutes evidence of obstruction? And what if further doubts are raised about the impartiality of the investigation? The president’s opponents [among whom Stephens counts himself] have made a huge political bet on an outcome that’s far from clear. Anything less than complete vindication for our side may wind up as utter humiliation.
What if those doughty NeverTrumpers Stephens and National Review's Rich Lowry (discussed today by Booman) raise "further doubts about the impartiality of the investigation" as if they were determined to ensure such an outcome?

Incidentally this is not France, where a criminal case is developed by an impartial juge d'instruction, but the United States, which uses what is known as an adversarial system in which prosecutors do the job, and the Special Counsel is a prosecutorial agent, representing the interest of "the people" against possible evil-doers (in a case where the attorney general, the nation's chief prosecutor, is for some reason or other recused, like for instance being up to his neck in the same suspicious behavior—repeated public lying and perjury in congressional testimony about contacts with the hostile foreign powern who is suspected of suborning the people under investigation), so the demand for an "impartial" investigation is a little off for starters. "Your honor, the prosecution is treating my client as if they thought he was guilty! This abuse must stop!"

The noise machine seems to have moved on in any case from this peculiar attack on Mueller, where Mueller discovers that senior agent Peter Strzok took a dim and hostile view of Trump last year and exiles him from the case and this somehow shows that Mueller himself is anti-Trump?  Anyway there's a new one, the case of Mueller investigator Andrew Weissmann, said to have sent former Acting Attorney General Sally Yates a note of commendation for her refusal to defend Trump's unconstitutional Muslim ban and possibly turned up at the Clinton election night party in the Javits Center on November 8 and yet is still working for the special counsel.

And now there's a new narrative in which Mueller is accused of "unlawfully" obtaining "tens of thousands of emails" of the Trump transition team from the General Services Administration—a presidential transition is a government entity funded through the GSA by statute, the Presidential Transition Act of 1963, and all documents it produces are public property. If members of the transition wanted to send private emails they should have been using their personal equipment and accounts, especially if they were among the stalwarts who'd spent the previous six months screaming "lock her up" about a former secretary of state who kept public and private emails on the same server.

It's clear that Republicans are now in their spaghetti-throwing stage over the Mueller investigation, trying every means of discrediting it they can come up with, with new accusations starting daily in the crazy organs of Breitbart and The Daily Caller and gradually circulating to persons of respect—


Trump's allies in the far-right and right-wing media have ramped up calls in recent weeks that Mueller's investigation is infected with anti-Trump bias and political corruption. That argument has since trickled into mainstream conservatives' playbook as well, with many lawmakers questioning the special counsel's objectivity.

"I have a lot of admiration and respect for Director Mueller, but I would think he would want to eliminate challenges to the integrity of his investigation by eliminating agents who have taken positions, either in text messages or through their political activity, that undermine the integrity of the results of the investigation," Sen. Majority Whip John Cornyn told ABC's "This Week."

Cornyn additionally called for Mueller to "clean house of partisans" on Saturday.

During a House Judiciary Committee hearing earlier this month, in which FBI director Chris Wray was testifying, Republican Rep. Steve Chabot called "the depths of this anti-Trump bias" on the special counsel's team "absolutely shocking."

Though the messages Strzok sent his girlfriend could just as easily have been written by Secretary of State Tillerson or National Security Adviser McMaster, as far as I could tell, to say nothing of most Senate Republicans. Color me less than shocked.

The participation of "serious" (i.e. at least nominally anti-Trump) conservative intellectual figures like Stephens and Lowry in the spaghetti toss is not an encouraging sign. It is clear that what they are defending isn't simply Trump, but the whole Republican project, seen as having just a brief window of time left to reverse progressive taxation and take down the institutions of the welfare state, such as they are, before demography and democracy push them off their precarious throne, and they won't give up while they have a chance. I still find it hard to believe they'll try to fire Mueller any time soon, but the constitutional crisis that got going when the owner of the Old Post Office hotel was inaugurated president is heating up. Stephens's concern trolling it, taking the stance of a Trump enemy telling us to give up the fight, is especially reprehensible. Did I mention that I really don't like Stephens?

Speaking of the Old Post Office, OpenSecrets.org has put up a page, "All the President's Profits", detailing the flow of money to the various Trump clubs and restaurants in the staging of political events. Note that the large majority comes from Trump's own campaign: he's literally funneling money from his donors into his own businesses: 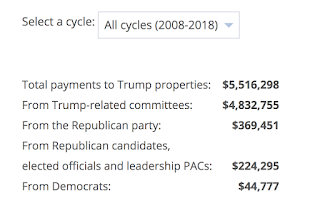