I'm so glad Monsignor Ross Douthat, Apostolic Nuncio to 42nd Street, wrote his column about the death of Liberalism ("How Liberalism Loses")—


In Australia a week ago, the party of the left lost an election it was supposed to win, to a conservative government headed by an evangelical Christian who won working-class votes by opposing liberal climate policies. In India last week, the Hindu-nationalist prime minister, Narendra Modi, won an overwhelming electoral victory. And as of this writing, Europeans are electing a Parliament that promises to have more populist representation than before.

—just in time to anticipate the European results, in which the Liberals in the strict sense were by far the biggest gainers, alongside the Greens, or in general those on the more-or-less left with a strong commitment to European integration, as opposed to the more-or-less left that couldn't make up its mind about Europe in Britain and France in particular, and the pro-Europe Merkel conservatives, who endured the biggest losses.

Anti-European reactionaries and nationalists did indeed increase their seat numbers, but in a clearly divided way between the proper hard right "Nationalists" in the chart) of Matteo Salvini's Lega in Italy and Marine Le Pen's Ralliement Nationale in France and the silly right "Freedom and Direct Democracy") of Nigel Farage's Brexit party, sadly the top vote-getter in the UK, and the Movimento Cinque Stelle in Italy which isn't really "right" at all; and plainly at the expense of the less Liberal.

Catastrophic, I'm sorry to say, for the SPD in Germany, which finished third behind the brilliantly performing Greens 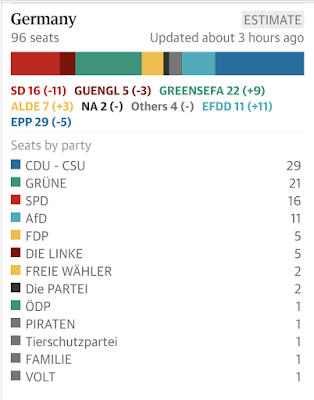 but far worse for the Conservatives in UK, who finished fifth while the long-despised Liberal Democrats turned up in second, 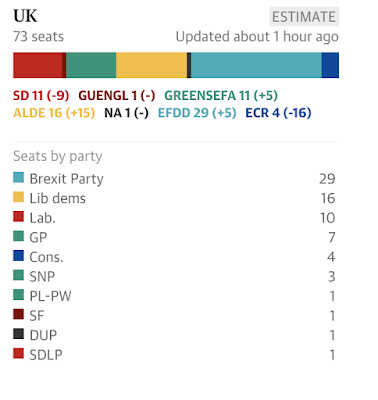 in spite of Conservative Prime Minister May's brave decision to seek more votes by resigning some weeks before she was scheduled to go (too little, too late!). The cluelessly brutal neoliberalism of Emanuel Macron's party in France has left them behind the fascists, though nobody got a lot of votes, and France's equivalent of the "Nordic Greens" did remarkably well: 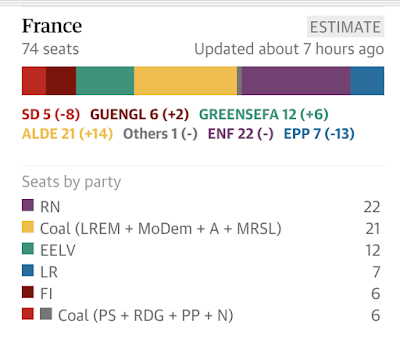 In Spain, the Socialists who won the recent general election have held strong, ; in Italy, the fascists may have come out on top but the competent Partito Democratico is in second place instead of the clown party, Poland has reasserted its normal conservatism, the Nazioid Fidesz party in Hungary caucuses with the Merkelians in any case, and the smaller countries don't show a lot of trends at all.

The vote against Liberals is only against them where they're in power, in the unique French case. Otherwise, the vote is against the traditional post–World War II social democracy and Christian democracy in the biggest countries other than Spain, and in search of something that's maybe more responsible, maybe more fun, maybe hipper (the results of the Nordic Greens in places like Greece and Portugal are pretty interesting), but at all events different. The Monsignor thought as he usually does that what was coming was nothing short of the defeat of beastly Modernism, but he was definitely wrong, once again.