For the Record: My Conversation With Rob Goldstone

Update 5/24/19: Correction—It wasn't in fact Rob I was talking to, I am informed via Twitter by Oui2Entertainment, but the company's co-founder David Wilson; I'm confident at the same time that it doesn't contradict anything Rob would wish to say.

I had no idea I was talking to Rob Goldstone, who used to be the music publicist for the Russian pop singer Emin Agalarov and served as the email intermediary between Emin's father Aras Agalarov and Donald Trump, Jr., arranging the famous Trump Tower meeting of 9 June 2016, until after it was over, and I looked for the first time at the book page screenshots he sent, and it turned out that they were all from Pop Stars, Pageants & Presidents: How an Email Trumped My Life by Rob Goldstone, 2018, from a publisher called Oui2Entertainment.

Probably because it's a completely trivial matter of interest only to people trying to distract attention from their actual crimes, like you when you cheerfully accepted an offer of "official documents" as "part of Russia and its government's support for Mr. Trump." "I love it!"
— HuffPoTwerp (@Yastreblyansky) May 21, 2019 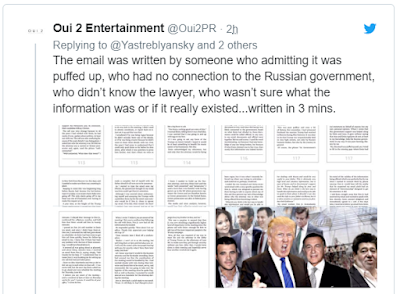 And worked pretty hard to lie about it when the public started to find out, though not as hard as his father, and too late to succeed in concealing it.
— HuffPoTwerp (@Yastreblyansky) May 21, 2019

So that everything worked out exactly AS IF that deal had been made on June 9 or thereabouts. Still waiting for a better explanation of how that happened.
— HuffPoTwerp (@Yastreblyansky) May 21, 2019

That's beside the indisputable point, though, that Junior clearly hoped to commit a crime and later worked under Donald's direction to cover up his attempt.
— HuffPoTwerp (@Yastreblyansky) May 21, 2019

I mean a coincidence that Russians did produce what Agalarov seemed to be promising and Trump did try to do what Veselnitskaya seemed to be asking for, just AS IF they had agreed.
— HuffPoTwerp (@Yastreblyansky) May 21, 2019


Wrote but failed to send the following text from my phone at this point: "Then again, Mueller did complain that many witnesses lied, concealed evidence, and refused to cooperate (like Donald and Junior, who declined to be interviewed), so who knows?" 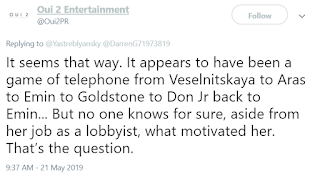 And Junior was very open about his motivations. "If it's what you say it is ["part of Russia's support for Mr. Trump"] I love it."
— HuffPoTwerp (@Yastreblyansky) May 21, 2019 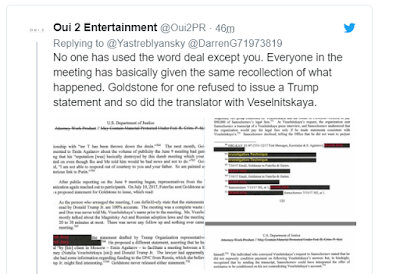 Not 100% true. Akhmetshin remembered something extremely deal-like, though not very serious-sounding the way he put it, that Junior agreed to consider sanctions relief if Trump were to get elected, in Mueller Report pic.twitter.com/yRkXG8hSYF
— HuffPoTwerp (@Yastreblyansky) May 21, 2019

I've been especially interested in Akhmetshin because what he said Veselnitskaya brought to the meeting is totally different than the five-page memo everybody knows about, and sounds like it resembles printout pages from the DNC emails. pic.twitter.com/bAgPUOcYyF
— HuffPoTwerp (@Yastreblyansky) May 21, 2019

Now I don't know if I should thank him for his time—he was really very generous—or just let it go. Update: In the end I did though. In subsequent tweets he mentioned that "Goldstone is not connected to Trumps or the Agalarovs anymore" and then

I can say I'm pretty much entirely sincere on that. I'm glad he's detached himself from these monsters and gone back to his real life, which I imagine (I don't know anything about his clients other than Emin, now a former client) as being a kind of 21st-century Broadway Danny Rose. He has no idea what the Agalarovs and Trumps were using him for and I don't suppose he ever will, but he doesn't deserve opprobrium for that.