I wanted to say something on the subject of "electability", but wasn't quite sure what; then there's this by Alex Pareene in The New Republic:

“Electability” is a crock of shit. It is defined, like political “moderation,” only in terms of opposition to things people want, but are told they can’t have, ranging from antiwar politics to left-wing economic populism to even the “cultural liberalism” that is seemingly the cornerstone of the modern Democratic Party. (Back in 2004, supporting civil unions, not even marriage, for same-sex couples was a threat to a Democrat’s perceived “electability.”) While the impulse to vote according to how you think a candidate would appeal to people who don’t share your priorities might make sense in theory, practice has revealed time and time again that no one involved in electoral politics—from the pundits down to the caucus-goers—has a clue who or what Americans will actually vote for. That was supposed to be, as the political scientist [Seth] Masket says, the main lesson of Trump’s election.

Which only goes partway to where I want to go, and gets a little locked into the self-denominated "progressive" cliché—I mean what made Trump seem unelectable wasn't his antiwar politics or his economic populism, it was his being a cartoon character, like Daffy Duck or Yosemite Sam, a buffoon completely ignorant of all the subject matter a president is expected to be conversant with, a person whose only genuine interest seemed to be in his own magnificence. And the way he didn't seem to really be in the money primary, too, which is an immensely important part of the electability calculus to the people who calculate it, and his personal unpopularity, which was always even worse than Hillary's, bad as that was.

And yet Trump won. And from there we know that he really was electable, contrary to what practically every political scientist would have told you. Or that the concept is meaningless, which is certainly a possibility.


Pareene's big point, that we don't know what electability is, holds, I think, and it's likely that its values change radically from year to year. Any theory that purports to tell you that Trump had some personal property differentiating him from Hillary Clinton that is the same as some personal property Obama had differentiating him from McCain in 2008 is a theory not worth having. Each electable person is electable in her or his own way, which can also change from year to year. And the whole process is at least partly irrational, even on the occasions when it generates a president you and I like for some reason.

And yet the entire Democratic party is, as the moment, not only taking the judgment of the panditry seriously but emulating it, and working up their preferences in terms of their own private views of electability, with the result that there's a plague of primary voters apparently supporting candidates they don't really like very much:

The Progressive Change Campaign Committee, a populist liberal PAC, polled its own members, asking why they supported their candidates of choice, and found basically an inverse relationship between which candidate’s supporters thought their pick would make the “best president” (Warren by a landslide) and which ones were motivated by their belief that their candidate is the most “electable” (Biden). As PCCC co-founder Adam Green put it: “Barely a majority of Biden’s own current supporters believe he would be the best Democratic president.”

They think Biden is more electable because they don't especially want to vote for him. Apparently because Clinton's loss in 2016 surprised and traumatized us so much that we've begun thinking of our support as a curse, or simply decided electability is being an old white man. Is that a good idea? Is it a good idea for us to try to unite around the figure of somebody we'd rather not vote for, on the basis of a theory that doesn't even make any sense?

Is that what we did in 2016? (I decided in April I was going to really like Hillary, and it turned out to be not that difficult for me, with what was indeed the most progressive party platform in history, but I have to admit I didn't persuade a ton of people against what we now know to be a partly Russian onslaught of disinformation.)

What I'd like to say is that we should stop talking about electability, since we don't know what it is, and start talking about something that definitely exists—for which my suggestion is coalitions. The "electability" model is generally directed at voters who probably aren't interested in our candidate, to be "peeled off" from their natural electorate; a coalition model, which is really nothing but what the urban Democratic party has always been since the 1840s, is the bringing together of people into a natural electorate from ethnic affiliations and unions, professional/trade groupings, religious outfits, and so forth.

We could ask of our candidate who they pull in, and the media could start reporting that a bit more systematically. It would take a different kind of research, perhaps.

As shown in the SSRS poll for CNN at the end of April, Biden's support among Democrats has been rising like crazy

but 64% of the respondents think they're likely to change their minds (compared to 33% in February's poll and 37% in January). Few want to know more about Bernie than they already do, many about Harris and Warren: 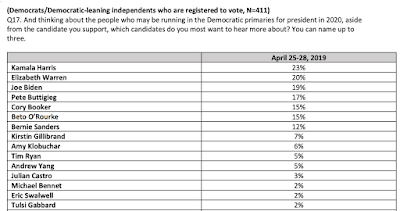 They're pretty overwhelmingly in favor of policies Biden is somewhat iffy on, 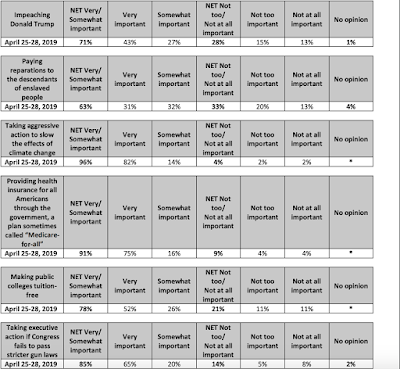 (can't find any indication he's discussed reparations for slavery since 1975, when he was decidedly against it) but "beating Trump" was the thing they cared about most: 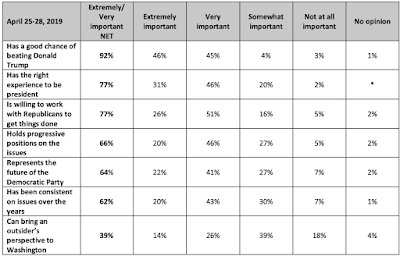 And according to the Morning Consult poll most voters would pick either Biden or Sanders as their second choice, which I think wasn't true a couple of weeks ago: 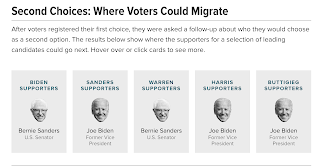 And in California, last polling had native daughter Kamala Harris neck and neck with Sanders (I think it was before Biden had announced), whereas in Massachusetts, Elizabeth Warren was behind Sanders and Biden both.