The Sage of Cleveland Park may have arrived at the stage of blaming Dad, who always liked you better than me, for why he's so fucked up:

Parents unconsciously shape their smiles and frowns to steer their children toward behavior they think will lead to achievement. Parents glow with extra fervor when their child studies hard, practices hard, wins first place, gets into a prestigious college. This sort of love is merit based. It is not simply: I love you. It is, I love you when you stay on my balance beam. I shower you with praise and care when you’re on my beam. The wolf of conditional love is lurking in these homes.

Or maybe he's having a fight with his own kids who complain that he always made them feel worthless by not praising them and he's trying to make an argument that it was for good reasons, not that he just wasn't paying attention. (The acknowledgments to The Road to Character say "My ex-wife, Sarah, has done and continues to do an amazing job raising our three children", suggesting he himself has rarely seen them at all, at least until they started showing up dressed for dinner instead of being put to bed during the cocktail hour.)

Today's column is clearly basically recycled out of the book, as you can amply tell by looking at the GoogleBooks presentation of the latter, where you'll find lots of the wolf of conditional love (ow-woooo!) and the scorpion of meritocracy (no, I made up the scorpion, but his hatred of this concept is getting pretty extreme), though not that balance beam analogy, which seems to belong to a different thread. One of these days I'm afraid I'm going to have to buy The Road to Character, although writing about it may well kill me. Just bumped into a paragraph on Viktor Frankl: 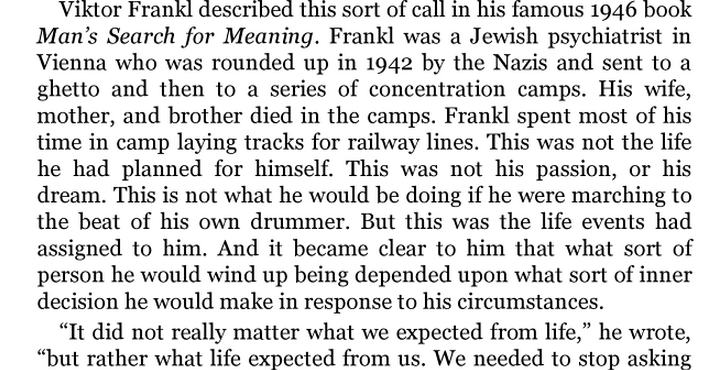 Yep, being a concentration camp prisoner watching his family murdered by Nazis and laying railroad track all day was not what I would be doing either if I were marching to the beat of my own drummer. Heck, Frankl didn't even have a drummer! That's how bad things were in the camps, the drummers were all at Theresienstadt. But you see we could really be all the way in to Jonah Goldberg cluelessness territory here.

The thing I want to advert to at the moment is a source studies issue, in fact a David Brooks Plagiarism Watch, which is of some social interest as well. Superficially, the column seems unusually bloodless and nonspecific, and you might well think he's just drunk-typing his resentment against his father or his children, until he gets to paragraph 11 (out of 13), where he mentions something he's claiming to have read, or read about, research by Avi Assor, Guy Roth, and Edward L. Deci, who collaborated on a 2004 paper in Journal of Personality, "The emotional costs of parents' conditional regard: A Self-Determination Theory analysis" (Ebsco link).

So far it looks as if he's simply doing his usual party trick of mentioning his sole bibliographic source as if it were an afterthought, by way of suggesting that he thought up all the ideas on his own, and then learned there were these clever people who agreed with him, but it's a bit more complicated than that: there's evidence that Assor et al. weren't even his source.

Here's the conclusion of the 2004 Assor, Roth, and Deci paper:


although perceived parental conditional regard was related to behavioral enactment in several domains, it was also associated with negative affective consequences such as feelings of internal compulsion, short-lived satisfaction, shame after failure, fluctuations in self-esteem, poor coping skills, low self-worth, a sense of being disapproved of by parents, and resentment toward parents. Further, it seems that these negative consequences may be passed from generation to generation, as Study 1 indicated that those mothers who perceived their parents as providing conditional attention and acceptance were themselves perceived by their daughters to use the same socializing approach.

Here's a summary by the psychologist Alfie Kohn, from a New York Times Science & Health op-ed of September 14 2009:


It turned out that children who received conditional approval were indeed somewhat more likely to act as the parent wanted. But compliance came at a steep price. First, these children tended to resent and dislike their parents. Second, they were apt to say that the way they acted was often due more to a “strong internal pressure” than to “a real sense of choice.” Moreover, their happiness after succeeding at something was usually short-lived, and they often felt guilty or ashamed.

In a companion study, Dr. Assor and his colleagues interviewed mothers of grown children. With this generation, too, conditional parenting proved damaging. Those mothers who, as children, sensed that they were loved only when they lived up to their parents’ expectations now felt less worthy as adults. Yet despite the negative effects, these mothers were more likely to use conditional affection with their own children.

And here's Brooks in the column:

Studies by Avi Assor, Guy Roth and Edward L. Deci suggest that children who receive conditional love often do better in the short run. They can be model students. But they suffer in the long run. They come to resent their parents. They are so influenced by fear that they become risk averse. They lose a sense of agency. They feel driven by internalized pressures more than by real freedom of choice. They feel less worthy as adults.

Brooks makes some substantial changes: he's made up the bit about risk aversion (a little projection, Dr. Freud?), and he's left out the second phase of the experiments following up with the second generation (the implication that the pathology is passed from one generation to the next would mess up his hypothesis about the unique awfulness of the present moment). But he's clearly followed Kohn's recap, not the original researchers', using the same sequencing and echoing the language ("receive", "resent", "internal pressure", "real... choice", "feel less worthy as adults"). In fact Mr. Morality is basically stealing.

The thing about Alfie Kohn is that, while the Assor team did those experiments, it is Kohn  who did the theoretical  workup of the idea that parental praise for a child's success can be interpreted by the child as a sign of "conditional love" and can thus be harmful, and took it to some very startling places (he'd like parents to use something warmer and less distancing than praise; Brooks and his cohorts would like cooler and more judgmental), in his 2006 book Unconditional Parenting: Moving from Rewards and Punishments to Love and Reason: 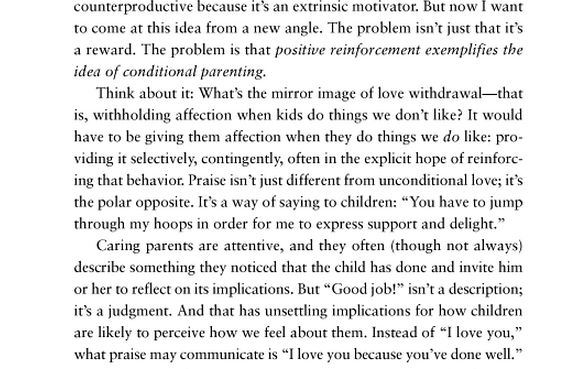 Brooks, cited at the top, has taken the idea straight from there, except he's traded in the old-fashioned hoops for his balance beam. And yet Kohn is not cited there, either, or anywhere, for that matter, in The Road to Character. It's as if Brooks had some reason for wanting to hide him that goes beyond the usual gentleman's plagiarism where he tries to share the credit with the actual author; he is literally suppressing Kohn's name. Why?

One reason would be that Kohn is a liberal, with an idea about the problems of praise that is entirely opposed to what Brooks wants to do with it. From Kohn's more recent The Myth of the Spoiled Child: Challenging the Conventional Wisdom about Children and Parenting (2014): 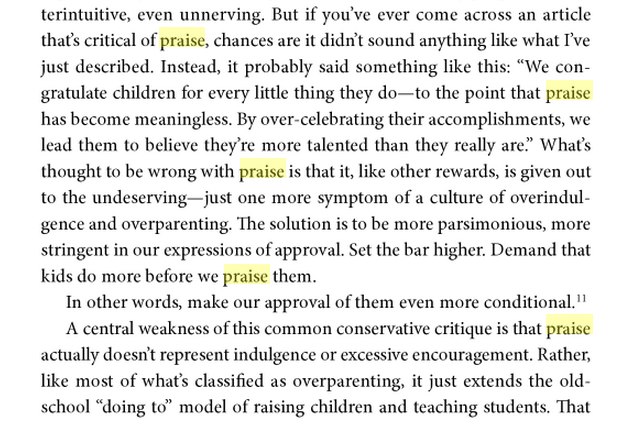 Brooks, for all his babble about unconditional love, doesn't want the kids to feel too comfortable; he's worried more about narcissism and his Big Me than anything else.

But the other thing is that Kohn has spoken disrespectfully of the Humility Professor himself. For instance, on the conservative bugaboo of lacking self-control as the cause of poverty and crime (also from The Myth of the Spoiled Child): 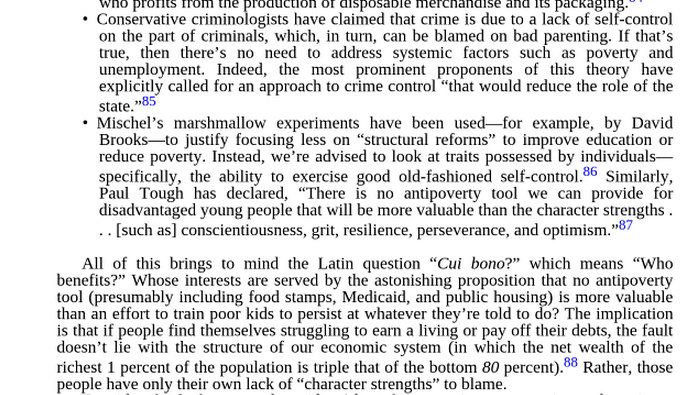 Brooks doesn't like Kohn because he doesn't play nice. He's partisan. He's not above some gentle mockery. So Brooks will appropriate his ideas, if they suit, but he won't say where they come from, and will go some length to cover up the tracks.