Do They Even Math, Bro?

Shorter Douthat: TBF, a merely mediocre president probably would have killed a lot of people too. https://t.co/jPbOrZXtOU

the peer-country evidence suggests that to take the pre-emptive, creative and draconian steps that might have actually suppressed the virus, and in the process saved that hundred thousand or more extra lives, would have probably required presidential greatness, not merely replacement-level competence. We can say without a doubt that Trump whiffed when this call for greatness came. But distinguishing between Trump’s incompetence and what an average president might have managed is harder, so long as so many peer-country death tolls look like ours.

You can't compare US cumulative deaths to Spain's or France's until they've stopped cumulating; we're still in the middle. pic.twitter.com/FkBsyrGBIm

The column isn't worth fisking in detail, because this stupidity makes it nonsensical, but I had to say something. If US Covid-19 deaths per million in today's official figures are 571.61 and Italy's are 588.32, then Italy's numbers are not much worse, but Italy is basically at the end of its wave and has been for some time, since late May, while ours is continuing to climb and about to bypass theirs; that's a curve that hasn't flattened at all. 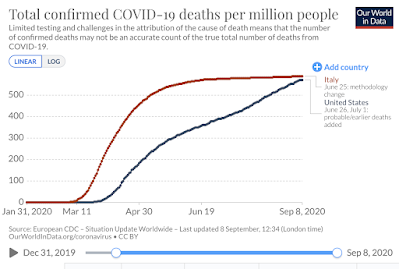 According to the projections of the so far pretty reliable Institute for Health Metrics and Evaluation (IHME), the US is on a path to add another 225,000 deaths between now and 1 January, for a cumulative total of 410,000 by then, or a rate of around 1,240 per million, more than twice as high as Italy's (which will be a bit higher by then, no doubt, but not a lot).

That's a slightly pessimistic projection, based on the assumption that vigilance will keep relaxing as it has been doing. It could be a lot worse, or a lot better, depending on what we choose to do:

But even in that best-case Singapore-style scenario we'd be hitting about 873 deaths per million, or still a hell of a lot more than Italy will have by that point, to say nothing of France (currently 470.73 per million) or the deservedly maligned Sweden (577.96), and almost certainly beyond the horribly handled UK (612.11) too. And it still won't be over!

Douthat's transparent desire to make excuses for the president would be funny, but he's also such an idiot.