It's the stupid, economy!

Hi, it's Stupid to say that it's still the economy, whatever David Brooks may think.

The US economy is the best ever, so if you're not happy there must be something wrong with you, like not going to church or getting married often enough. This explains why life expectancy has declined three years in a row for the first time since 1915-18. It's your fault.

Looks like he thinks the Republicans might lose the election two weeks ago, but only time will tell. Disclaimer: I am not writing this because I think there is anything interesting or worth responding to in the Brooks argument. I think it's dumb, and we've dealt with it before. But he's got some new errors and deceits and instances of terrible writing and he still has a gig with the New York Times, so I don't have any choice.


We’re enjoying one of the best economies of our lifetime.

Are you now? It looks delicious. Did you get it at Ottomanelli's?


The gains are finally being widely shared, even by the least skilled. As Michael Strain of the American Enterprise Institute recently noted, the median usual weekly earnings for workers who didn’t complete high school shot up by 6.5 percent over the past year.


That represents maybe 8% of the workforce (plus a disproportionate amount of those who aren't in the workforce and thus aren't benefiting from this trend at all), while those with high school or "some college",  representing some 55%, are getting the least. I assume a key factor in this is the rise in minimum wage in 19 states at the beginning of 2017 and 18 states (an overlapping group) at the beginning of 2018, which is a very good thing but, as predicted in some models, really limited to the lowest income levels. So "widely shared" seems like a bit of an exaggeration.


Thanks mostly to government transfer programs, incomes for the bottom fifth of society have increased by about 80 percent over the past four decades.

That's based on data collected by the Congressional Budget Office and interpreted by Robert Samuelson in the Washington Post, covering actually three and a half decades (1980 to 2015): 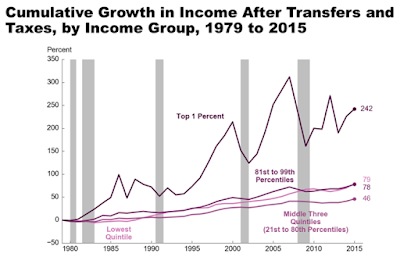 As you can see, the middle three fifths have indeed been stagnating over the period, with incomes rising around 1.3% a year, while the top fifth gets the same almost-2.3% or so assigned to the bottom one. But wait, there's more, because this analysis leaves out the effects of (mostly regressive) state taxes, but more importantly because of a wrinkle you can learn about from Austin Clemens of the Washington Center for Equitable Growth, which is that the before-and-after groups compared in the study aren't the same people (those who are in the bottom quintile before taxation and the Earned Income Tax Credit aren't all in the bottom quintile afterwards), and if you control for that, cumulative growth in the bottom fifth is just 62% over the 35 years, or 1.7% a year—while the growth rates for the top fifth, and obviously the top 1% (7% per year!), are unchanged, since those guys don't get EITC.

And then that analysis only takes us through 2015, and in the Trump presidency, per Robert Shapiro in the Washington Post, real incomes of the average worker have begun to decline:


To determine how much the real earnings of a typical working American fell during that period, simply adjust the $876 in median weekly earnings in the quarter ending June 30, 2018, for the 3.32 percent inflation that occurred in the 18 months from the first quarter of 2017 to that date. The result: $876 in June 2018 had the same value as $848.20 in January 2017. In real terms, the weekly earnings of a typical working American fell $16.80, or 1.9 percent, during Donald Trump's first 18 months as president.

So these are some of the ways in which this economy is not thrilling, particularly for those in the the very broad middle 60%.


And yet are we happy?


As the recovery has advanced, people’s faith in capitalism has actually declined, especially among the young. Only 45 percent of those between 18 and 29 see capitalism positively, a lower rate than in 2010, when the country was climbing out of the Great Recession.

So why the long faces?

Young people between 18 and 34 saw the most precipitous losses in income growth between around 2000 and 2010, and the smallest recovery. You may be enjoying the best economy ever, but millennials aren't enjoying it at all. 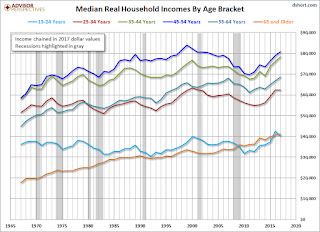 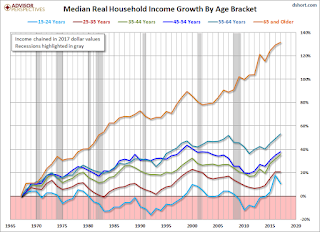 You might say they're getting their info on the state of the economy from their credit card balances instead of from Robert Samuelson, and that gives them a jaundiced view. Or you might say they know more about it than David F. Brooks.


Part of it, as Noah Smith of Bloomberg theorizes, may be disappointment among the well-educated young. They graduated from college, saddled with debt, and naturally expected the world to embrace them as their parents and schools had done. Instead, many entered into the gig economy, where a lot of work is temporary and insecure. Normal professions for liberal arts grads, like the law, are drying up.

How many unpaid internships can you endure before you lose faith in the system?

Thanks for backing me up here, Noah.


But the biggest factor is the crisis of connection. People, especially in the middle- and working-class slices of society, are less likely to volunteer in their community, less likely to go to church, less likely to know their neighbors, less likely to be married than they were at any time over the past several decades. In short, they have fewer resources to help them ride the creative destruction that is ever-present in a market economy.

Church aside, it's just not that easy to volunteer, get to know your neighbors, or get married if you're spending every available hour trying to stay solvent. I can't understand why this is so hard for Brooks to see. (Actually, I can.)


And they are dying. On Thursday, the Centers for Disease Control and Prevention reported that life expectancy in the United States declined for the third straight year. This is an absolutely stunning trend. In affluent, well-connected societies, life expectancies rise almost as a matter of course. The last time the American mortality rate fell for three straight years was 1915-1918, during World War I and the flu pandemic, which took 675,000 American lives.

Although since the years of World War I and the flu pandemic in the US are more like 1917-20, that might not be totally explanatory.

But we know very clearly that what's driving the decreased life expectancy is drug overdose deaths and suicides, which are characteristically taking place in rural areas, and what's problematic in rural areas isn't church attendance! It's poor employment growth as compared to booming cities and a lack of hope that things will get better among those with relatively less education. 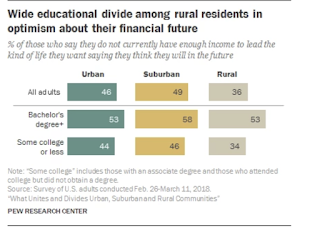 And, if it wasn't clear, Tom Saler spells it out in prose:


“The Great Recession hit harder and lasted longer in rural communities, and many predominately rural states still have yet to recover from the depths of the recession,” wrote Martin Heinrich in a May 2017 minority staff report to the congressional Joint Economic Committee. Total employment in rural communities still has not returned to its pre-recession level, while the education gap with urban areas has widened.
In 2000, 27 percent of metro-area residents held a bachelor degree or higher, compared with 16 percent for those living in rural communities; by 2016, that 11-percentage point gap had grown to 15 percentage points.  Almost 80 percent of those living outside of metropolitan areas hold only a high school diploma, or less.
In a knowledge-driven economy, that’s a major hurdle to overcome.
This has been another edition of David Brooks Doesn't Know What He's Talking About.