I know you're all sick of Mike Flynn by now but Mr. Bret Stephens ("Michael Flynn and the Presumption of Guilt") piping up to put his imprimatur on the worst version of the "Flynn is innocent" canard in his most offensively bland "just asking questions" manner really has to be fisked.


“Damn right, exactly right,” the fired, retired three-star general said in answer to audience chants of “lock her up.” “And you know why we’re saying that? We’re saying that because if I, a guy who knows this business, if I did a tenth, a tenth of what [Hillary Clinton] did, I would be in jail today.” This was said by a man who, as a former head of the Defense Intelligence Agency and top foreign policy adviser to Donald Trump, had already taken $45,000 from the K.G.B. regime in Moscow and would later take $530,000 from the Islamist regime in Ankara as an unregistered foreign agent. If Flynn had been prosecuted, judged and sentenced according to his own moral arithmetic, he’d be behind bars today.

Fortunately he isn’t, because sleazy behavior isn’t the same as criminal conduct.

Way to sneak in the suggestion that Hillary Clinton probably is guilty of some moral equivalent to bagging over $5 million (i.e., ten times Flynn's acknowledged $530K)  as an unauthorized foreign agent without bothering to say what you think it might be. And the suggestion that what we agree Flynn did is just sleazy behavior, not criminal conduct.

Violating the Foreign Agents Registration Act is a crime. Rick Gates and Paul Manafort, for example, have pleaded guilty to it, among other crimes, and are doing time as we speak. And while Flynn's first legal team negotiated him down to more lying in that case—to an uncharged count of filing a false FARA declaration—it is clearly stipulated in the Statement of Offense: 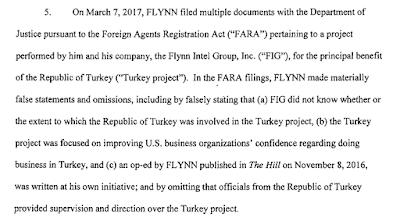 Like Michael Cohen, Flynn evaded charges of FARA violation as part of his plea deal, in return for agreeing to cooperate with the Mueller investigation. But there's no doubt that he did it, and it's definitely illegal.


By now, every thoughtful observer should have learned two things from the experience of the Trump administration.

The first is that few things in politics are as despicable as efforts to use the power of the state to criminalize a political opponent. That’s why Trump’s efforts to bully a foreign ally into digging up dirt on his domestic opponent was so reprehensible. That’s why Trump deserved his impeachment.

Excuse me? Michael Flynn was in some sense a political opponent of Robert Mueller, Brandon Van Grack, and Zainab Ahmad (leaders of the team that filed the charges)? Pretty sure Mueller wasn't running for anything. Can you please explain what you mean, and substantiate it?


The second is that civil liberties matter, never more so than when a government seeks to prosecute the people it dislikes by hiding exculpatory evidence, using deceptive methods, relying on outdated laws or threatening them with financial or familial ruin.

What government did you have in mind? It was under the Trump administration that the FBI decided it needed to interview Flynn and the Mueller investigation prosecuted him. In what sense did "the government" dislike Flynn?

What exculpatory evidence? The article Stephens links notes a suggestion suggesting that DOJ "may believe" such evidence exists, but doesn't tell us what it would be if it did exist or how we would know.


The Justice Department said Friday it has provided former national security adviser Michael Flynn’s lawyers with several documents unearthed in a review ordered by Attorney General William Barr, indicating the agency may believe exculpatory evidence was not handed over before Flynn pleaded guilty.

And adds that it probably wouldn't make any difference to the case anyway, since


a federal judge rebutted such claims in 2019, ruling that Flynn “cannot overcome the hurdle [of] showing a reasonable probability of a different outcome.”

What deceptive methods? What threats of ruin? (It's fairly ruinous to go to prison and face hefty fines, but that's never stopped prosecutors from threatening it every chance they get.) What outdated laws? Three paragraphs ago you said what Flynn did wasn't illegal. Now you're saying technically it's illegal but old-fashioned to care? Where did you take those goal posts?


What, after all, is the supposed case against Flynn? There’s the claim that he undermined American interests by urging the Russian ambassador not to expel American diplomats in Russia. But that was a request in the service of American interests, not against them. There’s the argument that the call violated the 1799 Logan Act. But nobody has been convicted under that act and calls between incoming administration officials and foreign diplomats are hardly unprecedented.

He urged the ambassador to urge President Putin not to expel US diplomats from Russia in the service of a particular agenda, in the hope of making it easier for Trump, when he came into office three weeks later, to get rid of the sanctions Obama had just put in place against Russia for interfering with the 2016 election.


Flynn told McFarland that the Russian response to the sanctions was not going to be escalatory because Russia wanted a good relationship with the Trump Administration.93 On December 30, 2016, Russian President Vladimir Putin announced that Russia would not take retaliatory measures in response to the sanctions at that time and would instead “plan ... further steps to restore Russian-US relations based on the policies of the Trump Administration."94 Following that announcement, the President-Elect tweeted, “Great move on delay (by V. Putin) — I always knew he was very smart!” (Mueller II:22-23)

(I believe the correctness of my account will be clearer when the call transcripts are released. In addition to resisting Russia sanctions in general for his first two years, Trump did work pretty hard to undo the main part of the December 2016 sanctions, the US seizure of two Russian diplomatic compounds in Maryland and Long Island, and kept saying he'd do it through at least June 2017, but apparently the intelligence community succeeded in stopping him—the Russians had used the compounds in a massive operation to monitor the FBI.)

Flynn may have believed it was "in the service of American interests" to let Russia interfere with US elections with impunity; it was certainly in Trump's interest, since he was the politician who benefited from it. But the Obama administration, at the time Flynn was making his secret calls, regarded Russian election interference as a pretty bad thing and wanted to discourage Putin from doing it again. This is why Flynn's calls really did violate the Logan Act: not because he called a foreign diplomat but because he was undermining the president's policy. And nobody had ever been prosecuted under the Logan Act (Stephens says "nobody has been convicted" because he wants to hide that) because nobody's ever been caught doing it (a lot of us are convinced, of course, that the Nixon and Reagan campaigns violated the Logan Act in 1968 and 1980 respectively). It's not an "outdated" law. It's far more relevant than it was when it was passed.


There is his alleged lying to F.B.I. agents about his conversation with the Russian ambassador. But the bureau’s record of the interview shows the agents thought Flynn “did not give any indicators of deception,” according to the Justice Department’s motion to dismiss the case.

Oh, for fuck's sake, Bret. They'd seen the FBI report of the conversations he was lying about! They apparently observed that he was looking cool and comfortable and showed no signs of fear, and they made a note of that, but they knew he was lying.


The public statements of incoming Administration officials denying that Flynn and Kislyak had discussed sanctions alarmed senior DOJ officials, who were aware that the statements were not true.134 (Mueller II:30; the reason they were aware was classified, of course, though it looks like it won't be for long.)

In addition to the fact that he pleaded guilty to it twice, before two different judges. It's not "alleged". Enough.