Mr. Bret on the Plague

Shorter Bret Stephens: How can we know if the virus is going to kill us all? Surely it's unwise to do anything rash until we're sure! https://t.co/cHk4lZFl5D
— Leaves of Yas (@Yastreblyansky) March 21, 2020

Stephens ("It's Dangerous to Be Ruled by Fear") needs a little fisking. Starting with the way he stakes out a moderate position by accusing both sides of doing it even inside Donald Trump's brain:


Donald Trump’s first instinct when it came to the coronavirus was to dismiss the threat as overblown, over there, and “totally under control.” His second was to use the pandemic as an opportunity to show off his world-historical leadership skills by treating the virus as a threat on par with World War II.

Both reactions were driven by politics, not evidence. The first was unquestionably wrong. The second needs to be questioned aggressively before we impose solutions possibly more destructive than the virus itself.

The World War II analogy has been raised by a bunch of figures, from Bernard Sanders to Joe Scarborough, who are not in fact strongly committed to giving Trump an opportunity to show off his world-historical leadership skills. Trump himself is interested in something like that when he happily agrees to be referred to as a "wartime president", but his ideas of leadership in  World War II are a little foggy:

“Every generation of Americans has been called to make shared sacrifices for the good of the nation,” he told reporters, offering examples like teenagers volunteering to fight in the war and workers sleeping on factory floors.

“To this day, nobody has ever seen like it, what they were able to do during World War II,” he continued. “Now it's our time. We must sacrifice together, because we are all in this together, and we will come through together. It's the invisible enemy. That's always the toughest enemy, the invisible enemy.”

Find myself idly wondering what sacrifices he is making in the combat against the invisible enemy. He's gradually had to close up the hotels and golf courses (not all of them: Trump International in New York is closing today but the one in Washington is still open, with 5% occupancy, and so is Mar-a-Lago), but that hasn't been voluntary. Is he going to volunteer those great spaces for use as field hospitals? Is he going to do anything for his hundreds of laid-off workers? IS HE BOGROLL as Smut would say.

One nonsalaried employee in the [Trump International Las Vegas] hotel’s food and beverage department said his manager told him he would receive nothing.

The most World War II thing he could do would be to set up something analogous to Roosevelt's War Production Board of 1942, which supervised the transformation of something like a third of American industry to satisfy war needs. They could be building hospitals, manufacturing PPE for medical workers and test kits for the virus, and moving it across the country to everywhere it's needed. Curiously enough, Trump has had an opportunity to do something like that, but it's impossible to learn whether he has or not:

Mr. President — stop lying and start acting. Use the full extent of your authorities, now, to ensure that we are producing all essential goods and delivering them where they need to go. https://t.co/uIi1Rxha1C
— Joe Biden (Text Join to 30330) (@JoeBiden) March 22, 2020

He seems to think he has, but he's not sure and can't point us to any evidence of it. Meanwhile, Mr. Bret goes on to say,


On Thursday, Gov. Gavin Newsom of California commanded the people of his state to stay home. That’s roughly 40 million people. He anticipates that about 25 million Californians will be infected by the virus over the next eight weeks.

Where does that projection come from? The governor cites a “model” used by state planners, the accuracy of which can only be guessed. How long will it be enforced, and for how long can it be sustained? Nobody knows. The only certainty is that, in the midst of a crisis, politicians are rarely penalized for predicting the worst possible outcome. If it comes to pass, they seem prophetic. If it doesn’t, they take credit for averting catastrophe.

Actually 25.5 million. Mr. Bret is unable to supply any information about what kind of model it is—his link goes to an NYT story that simply asserts its existence—but you can see how the word "model" makes him curl his aristocratic lip.

I can't get any direct information about the model, but I can get some commentary from somebody who's intimately acquainted with how such things are done, Lee Riley, a professor of epidemiology and infectious diseases at the UC Berkeley School of Public Health and chair of the division of infectious diseases and vaccinology, who doesn't know either, but that doesn't suggest to him that the Californa stay-in-place order is an overreaction:


I don’t have enough information about the source of the data that the governor is using to make any real comments. It’s not disclosed how those numbers were derived. The projection was probably made on not having the control measures that we currently have [such as Thursday’s shelter in place order]. If we didn’t do anything, then yes, certainly, we could have millions of people getting infected.

But we are doing things. And, I don’t know how people are behaving, but the fact that we’re not seeing the explosive increase in the number of deaths tells me that, number one, the healthcare providers are really doing a good job preventing deaths, and that measures that are being taken right now are working, at some level....

One caveat is that these numbers that we’re getting may be somewhat delayed because as you know, the testing is increasing in number, and so there’s a real backlog of the tests. We don’t really know exactly what’s happening now. The numbers that we’re seeing are based on the tests that were done several days ago, and they’re just coming up because [at] a lot of the testing services, there’s a huge backlog right now.

Stephens was right, it could go either way!

But the total number of confirmed Covid-19 cases in California went from 982 on Friday to 1,233 yesterday—that's a 21% increase overnight—and there are 12,700 tests for which they haven't yet published results, so there's a way to go before it starts getting better in the best of circumstances. As of today, another huge overnight increase; it looks to be somewhere upwards of 1,500 cases per Fresno Bee: 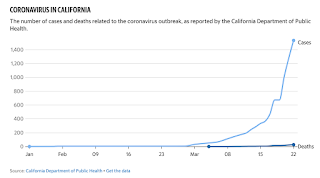 Again, the terrifying steepness of that curve is at least partly a function of the rapid increase in testing; it will soften as testing proceeds, though the testing still isn't adequate (it's restricted to people with symptoms).

But 23 people are dead, that's slightly over a notional 1% death rate, which would mean, if there were really 25 million infections in California, 250,000 deaths. That's what we need to not happen.

Stephens notes that the isolation strategy will be pretty bad for the economy, and could even make a lot of people really sad:


Can the United States afford to shut down for a week or two? Yes. What about a few months? In that event, we might face not a recession but a full-blown depression, which would be financially ruinous for hundreds of millions and have its own disastrous knock-on effects in mental, emotional, and physical health, including for the elderly and sick who already face the greatest risks from the virus.

What if two million Americans were to die in the next several months on the way into a situation where people could no longer protect themselves at all, in which our healthcare systems totally ceased functioning? I'd say that might be even worse for the business community and the general mood.


Especially since we are making historically momentous policy decisions based on dangerously spotty data. “We don’t know if we are failing to capture infections by a factor of three or 300,” writes Stanford’s disease prevention expert, John P.A. Ioannidis, in a must-read piece in the authoritative science and medicine website Stat (itself a must-read). The need for better data, obtained through repeated random sampling of the entire population, could not be clearer.

I agree 100% with Ioannidis that there should be massive random sampling to improve the data quality, but I don't see how we can pause the social isolation measures for three or six weeks to do it, allowing the bars and beaches and schools and sports competitions and concerts to carry on as before, given the geometrical rate at which the disease clearly spreads. We'll have to improve the testing as we can, simultaneously with working to flatten that curve. It doesn't matter whether you don't know about two thirds of the cases or 99.7% of them. There are never going to be fewer cases than your inadequate testing leads you to suspect.

When you start testing seems to be a more important variable in the deadliness of the disease than how much of it, judging from the various experiences so far of China (where early catastrophic failure to test may have been largely repaired by crazy radical isolation policy), the tiger economies of Hong Kong, Singapore, South Korea, and Taiwan (in all of which early testing and isolation of those with symptoms followed by a more thorough testing regime as it became available has led to the most successful outcomes), and the horrible cases of Italy and Iran and probably Russia, where testing began too late, though not as late as the US.

None of these countries are mentioned by Stephens or Ioannidis, funnily enough, as if they had decided that American exceptionalism is so exceptional that the only relevant research is what's conducted here, though these countries provide the material—the epidemiological history of the novel coronavirus from its first appearance—that the statistical models are built on. Stephens name-checks Israel, where he notes (correctly, I must say) that Binyamin Netanyahu seems to have coopted the disease to help him stay out of jail and in the prime minister's seat. Ioannidis admires the moderation in Britain's cheerful attitude in the ancient times of five or six days ago, as an example of someplace where they've chosen moderation:

School closures, for example, may reduce transmission rates. But they may also backfire if children socialize anyhow, if school closure leads children to spend more time with susceptible elderly family members, if children at home disrupt their parents ability to work, and more. School closures may also diminish the chances of developing herd immunity in an age group that is spared serious disease.

This has been the perspective behind the different stance of the United Kingdom keeping schools open, at least until as I write this. In the absence of data on the real course of the epidemic, we don’t know whether this perspective was brilliant or catastrophic.

Now UK is on the same trajectory as Italy, just two weeks behind, with 5,683 confirmed coronavirus cases (we don't know, as Ioannidis would say, whether that misses the true figure by a factor of 3 or a factor of 300) and 281 deaths; schools have been closed, along with all bars, restaurants, cafés, gyms, and cinemas, several London hospitals are officially overwhelmed, and Prime Minister Boris Johnson, no longer jaunty, emerged today to ask Britons not to visit their mums—it's Mothering Sunday in that green and pleasant land, but it's not safe.

In the hours since Mr. Bret posted his column it has gone from stupid to dangerously irresponsible to downright delusional.