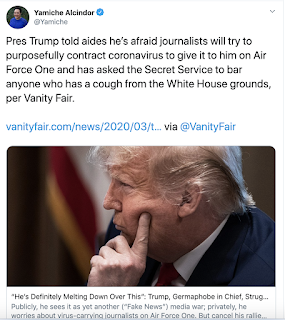 Anybody That Needs a Test
by Donald J. Trump

If there’s a doctor that wants to test, if there’s
somebody coming off a ship — like the big
monster ship that’s out there right now,
which, you know — again, that’s a big decision.

Do I want to bring all those people on?
People would like me to do that. I
don’t like the idea of doing it.
But anybody that needs a test can have a test.

They’re all set. They have them out there.
In addition to that, they’re making millions
of more as we speak. But as of right now
and yesterday, anybody that needs a test —

that’s the important thing — and the tests
are all perfect, like the letter was perfect.
The transcription was perfect, right? This
was not as perfect as that, but pretty good.


From president's remarks at the Centers for Disease Control, Atlanta, 6 March. Dated by now, obviously. Then, he was merely lying about whether tests for Covid-19 infection were available; now, according to reporting in Vanity Fair, he's telling staffers about a murderous conspiracy of journalists who are going to infect him—one of them will deliberately catch the virus and bring it aboard Air Force One, traitorously coughing it into the president's personal air. This is a level of paranoia we haven't seen before.

Then, he was reflecting with evident pleasure on how the pandemic was going to be good for the Trump business—he thought cutting off international flights would mean more people staying in US hotels—


In a certain way, you could say that the borders are automatically shut down, without having to say “shut down.”  I mean, they’re, to a certain extent, automatically shut down.  But it’s affecting the airline business, as it would.  And a lot of people are staying in our country, and they’re shopping and using our hotels in this country.  So, from that standpoint, I think, probably, there’s a positive impact.  But there’s also an impact on overseas travel, which will be fairly substantial.

Now, more darkly, he's trying to prevent older people from hearing the warning that they shouldn't be taking airplane trips at all:

"The person did not have direct knowledge about why the decision to kill the language was made" and journalists can't say it but we really do know, don't we? After that other crack about how stopping international travel is good for US hotel business? https://t.co/8Ix2OYkwGM
— The Tests Are All Perfect (@Yastreblyansky) March 9, 2020


He's doing his best to put thousands of Americans in danger in the hopes of filling a few more rooms at the Trump International and Mar-a-Lago.

He lost his battle to keep the passengers of the Grand Princess, the "big monster ship", offshore and out of the statistics, and they are now disembarking and going into quarantine; though now there are well over 700 Covid-19 cases in the US, the 21 cases on the boat won't make any statistical noise any more, so he didn't really lose. On the other hand, it is not the case that anybody who needs a test gets a test; by yesterday afternoon, just 4,384 people had been tested for the virus, according to estimates created by The Atlantic out of the fragments of data supplied by the federal government and the various state programs—CDC is unable to put together its own number—and that isn't enough for statisticians to begin guessing accurately how many people have been infected:


The sluggish rollout of the tests has become a debilitating weakness in America’s response to the spread of the coronavirus. By this point in its outbreak, South Korea had tested more than 100,000 people for the disease, and it was testing roughly 15,000 people every day. The United Kingdom, where three people have died of COVID-19, has already tested more than 24,900 people.

What has enabled China to get control over its own much worse crisis isn't the draconian character of the response, according to Bruce Aylward of the World Health Organization, but the scientific rigor:


you have to look at the data. You have to look at the data. We spent two weeks on the ground looking at the data. Every other province had hundreds if not thousands of cases, not unlike the situation you see in European countries or in the U.S. These are massive provinces with tens and even 100 million people in them, and they took a - they went after the cases. They looked for the contacts, and then they prevented mass gatherings of adult populations. These were their key measures. That's how they stopped it in the areas with over 1.3 billion people.

An administration that fights science at every step is not likely to handle it well, though we have plenty of scientists that can do it if they're permitted to do so and communicate openly.

I don't know what to say about Trump's opinion that the tests are "beautiful" and "perfect", or what that might mean to him, beyond the suggestion that he doesn't know what's at issue at all. Presumably he's trying to continue claiming that the pandemic doesn't really exist, at least not here, and we should all go shopping, or better still drinking at our local Trump Grill if our locality has one so he can be realizing some actual cash out of it. But bringing in the comparable perfection of the "letter" and the "transcription", by which he is believed to have meant the Ukrainian phone call, not a letter, of last July and its transcript—speaking of cognitive decline, has he really forgotten to that extent what the occasion was for all that fuss?—makes you wonder if he's got some kind of guilt on his mind we don't even know about. "The tests are perfect" sounds like Trumpian for "The Senate will never convict me for this." For what?

Maybe for the way he and his minions, especially Bolton, took apart the Obama-related team responsible for White House response for pandemics


"The fact that they explicitly dismantled the office in the White House that was tasked with preparing for exactly this kind of a risk is hugely concerning," Jeremy Konyndyk, who ran foreign disaster assistance in the Obama administration, told the Guardian. "Both the structure and all the institutional memory is gone now."

Meanwhile, in a hilarious development, a shocking number of the Republican Party's worst people, all household names around here—Ted Cruz, Doug Collins, Matt Gaetz, Mark Meadows, Paul Gosar, Louie Gohmert, and CPAC chairman Matt Schlapp, exposed themselves to some anonymous VIP carrrying the virus at the CPAC convention last week and then proceeded to shake hands enthusiastically with the president or fly in his plane, like characters in an Edgar Allen Poe story of aristocratic heedlessness. I'm convinced it won't end like "The Masque of the Red Death"—just creating the setup is entertaining enough for me.