As the Big Tuesday results started flowing in last night, a thing that happened earlier was starting to take on some iconic experience for me: the pearl clutching when candidate Joe Biden visiting a Detroit auto plant has a run-in with a misinformed young gun nut and tells him he's "full of shit":

It's almost like Berners have never met anybody from the working class in real life, or possibly never met anybody at all. The idea of Joe Biden being some kind of lordly figure unable to repress his contempt for the simple (white) working stiff will not work.

You know to what kind of person you can always say, "You're full of shit"? Your brother.


When you're unable to repress your disdain for the working class, you say, "Tut tut, my dear man, surely you cannot be so backward as to challenge my rightness as a person who went to a much better school than yours." When you look a man in the face and say, "You're full of shit," you aren't speaking from a position of privilege. You're mano a mano, man. And when Biden, exasperated, says, "C'mon, man!" that's what he's doing, fluently, because it's part of his heritage.

The young revolutionaries at Sarah Lawrence and Middlebury may not completely understand that, brought up in families where siblings always protect one another's self-esteem with the skills they acquired at Montessori school, but it's true. Maybe they don't represent the advance guard of the international proletariat after all!

The guy Joe is exploding at in the video isn't a victim of heartless capitalism, either. He's a UAW member with a good job and fantastic benefits, thanks to the Obama administration's rescue of the industry. He's not one of those guys we're worried about who's about to succumb to death from despair. You see the black colleague in the video looking on, amused, in the first seconds of the recording? He's not shocked, and I'll bet he's not concerned about anybody taking his guns away, and I'll bet he voted for Biden yesterday. The white guy in the altercation isn't shocked either, but he wasn't going to vote for Biden in any case.

Part of the story of yesterday's primaries is about Bernard Sanders and his theory of how to win elections, that his own campaign style is the way to win by its inevitable attraction for people who don't always vote, especially the young ones. He's been proving his theory is wrong for four years now, and yesterday he proved it better than ever. Almost exactly four years ago I looked at the data of the last Michigan primary and concluded that the astonishing Sanders upset (he'd been 20 points behind Hillary Clinton in the most recent polls) was a freak result caused by extremely low turnout:


I thought of an approach based on the 2012 general election. You can think of this year's Republican primary vote as a function of the population that voted the Republican ticket in that November (which included Democrats and independents, just as Michigan's primary does), as representing a kind of maximal picture of the Michigan Republican vote, and you can do the same thing for the Democrats.

By that measure (incredibly crude, but it has novelty value!), recognizing that the Republican turnout itself is down from four years ago [second thoughts: it's not, primary turnout is always quite a bit lower than the general, so my measure shows Republican turnout in that primary was pretty high], the Democratic turnout looks as low as it's been elsewhere this year or lower, and the revolution hasn't started yet.

This year, we learned what an unusually high turnout in Michigan's Democratic primary does, and it's exactly the opposite: Sanders lost in every county in the state. What's happening is that Rachel Bitecofer's theory of the 2020 electorate is holding up, and what is driving Democratic voter enthusiasm—which is immense—is negative partisanship; not the policy issues we might wish people would focus on more, but anxiety to get Trump out of office and stick it to the vile party that gave him to us.

And that's not just disfavoring Sanders; it's absolutely favoring Biden in the primaries, because while Sanders's unreliable voters, the general under-30 cohort, may want to talk mostly about the issues that divide Biden and Sanders, the less reliable voters in Biden's coalition are men without college degrees, from that same "working class", who get more excited about winning the election, and did show up: 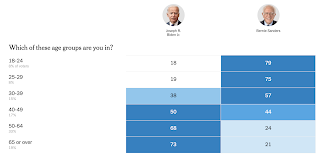 Beyond Bitecofer, we may be seeing some evidence this year for a theory about the electoral potency of that "working class". But not where Sanders thought he'd found it in 2016, in North Dakota and Nebraska, and not voting for him.