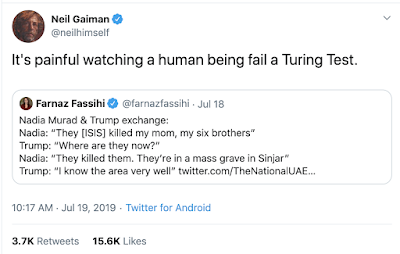 
Me: He doesn't think he can get out of it with a Sharpie, he thinks he can get out of it by denying it "very powerfully", like Putin or MBS. The Sharpie is pro forma, because it's the custom to offer evidence and because the problem is, for a change, so simple that he can do it himself. It's true he was surprised and annoyed that it wasn't good enough for people—that's because he doesn't understand the relationship between evidence and conclusion whereas your approach seems bent on insisting that he does.

Jordan: But at a certain point, he picked up the Sharpie and drew that curve onto the map. In that moment, what was he thinking? Are you saying he wasn't dealing with evidence and conclusion?

(I'm not picking a fight -- I'm genuinely interested and confused.)

I'm not very happy with the post, not just because I haven't succeeded in communicating my idea to the community but even more because I haven't succeeded in communicating it to myself. If we write to find out what our idea is, and that's a huge part of it for me, then I failed. I liked a part of the post nobody's interested in, the first paragraph, and Jordan's stuck on a point I think is obvious.

So I'm not picking a fight either, but I want to try coming at that point from a different direction, if I may, that I've written up a bit before on the Twitter, which is the subject of Trump "joking"—the pattern where he says some abominable thing

"He's now president for life," Trump said [of Xi Jinping] "And look, he was able to do that. I think it's great. Maybe we'll have to give that a shot someday."

and then, when people get upset, explains that he was only "joking", and the social media scrimmage between paranoids saying "No, he really means it! Dictatorship is here!" and conservatives and journalists saying, "Lighten up!"

What neither side of this ever seems to understand is that he doesn't get joking. He's blind to how it works. It's an aspect of his personality disorder.

But at the same time he's shrewder than he looks, and he knows that joking is attractive, and makes you popular, and even turns some women on. He's watched it and studied it, like the Martian anthropologist, and he's learned how to model joking behavior somewhat successfully, on the basis of his observations.

What he sees is somebody saying silly things for no good reason—things that are obviously not true but aren't normal lies, since they don't cover up anything the speaker wants to hide—and an audience laughing with pleasure. But what kind of thing can you say that's false but unprofitable?

A lie is when you say something false to hide your misbehavior, and bullshit is when you make up something that may or may not be false to assert your superior knowledge. Fiction is stuff writers do (Trump never discusses movies or fictional TV shows, except to pass judgment on a performer he's having a feud with, which is pretty deviant for a man of his generation, and I'm guessing he's blind to that too).

So one thing that's pointlessly untrue is things you wish were true, like you wish you could be president for life.


“A sad day for the Democrats, Kristen Gillibrand has dropped out of the Presidential Primary. I’m glad they never found out that she was the one I was really afraid of!” [She's not the one he's really afraid of.]

"There's nothing like the Medal of Honor. I wanted one but they told me I don't qualify, Woody."
“I said: Could I give it to myself anyway?” he continued with a smile, “They said: I don't think that's a good idea.”

“Don’t worry, I’ll pardon you,” [if they break the law in contracting or using eminent domain] he has told officials in meetings about the wall.

“He said people expected him to build a wall, and it had to be done by the election,” one former official said.

Asked for comment, a White House official, who spoke on the condition of anonymity, said Trump is joking when he makes such statements about pardons.

“Russia, if you’re listening, I hope you’re able to find the 30,000 emails that are missing. I think you will probably be rewarded mightily by our press.”

Why exactly did he think it was the press that was going to reward them? That was actually the "joke" part. The reality, as far as he was concerned, was that even if he made this miraculous find, the press wouldn't care, because of their uncontrollable hostility toward them. Saying they would care was a piece of pointless fiction that he wishes were true. (He was in fact thinking a lot about those emails, as we now know, and the hope that Russia might produce them.)

So often, I believe he really is trying to joke, but just doing it wrong. (Another style of "joking" he's addicted to is the insult comedy style, where he just fails because he doesn't understand there needs to be a point beyond saying something "bad" about somebody.) Though if you gratify the wish he's expressing he'll gladly accept whatever (as when the Russians jumped to looking for those nonexistent emails), and in that sense he's got the last laugh.

I'd make the same kind of argument about Trump's relationship to inductive logic, the method of making inferences from specific data to a general conclusion, that he doesn't know what it is but knows how to model it: you make the statement you want, and then you show your audience a piece of paper that agrees with you. There's no inference between saying you're the most popular president inside the Republican Party in history and displaying a piece of paper saying your approval is 94% as a single data point when you make no attempt to say where the piece of paper comes from (as far as anybody can tell this particular number came from nowhere, though Trump's numbers aren't normally that bad) or to reconcile it with the better supported number of 88%: you're not deriving one statement from the other, you're just asserting,  falsely, that they're the same thing (though he plainly doesn't know, not just how popular he is, but also how popular any other American president has been, but he also doesn't care; shown accurate numbers and comparisons, he'll just denounce them for saying "bad things" about him).

The same goes for the bud he drew on the hurricane prediction map: he's not saying "This proves that I was told Alabama would be hit by the hurricane", he's lying "This is the map I saw or something like it." Or any time he pulls out a number, bogus or not, and makes an assertion regarding it. There isn't enough distance between the facts he alleges and the conclusion he claims to draw from them to call it an inference. One just isn't more specific than the other.

Or the specific-to-general progression is there, but he can't explain the connection, as in when he claims to have managed the economy better than previous presidents, backed up with some numbers that aren't compared with the relevant numbers from the same previous presidents, but also is unable to say what he thinks he's done as president to create the situation he's bragging about.

He is mimicking the act of inference, the same way as he mimics the act of making a joke, but he lacks the sense of what it's about (which he has in common, matter of fact, with a number of people in the world of punditry and politics, most but by no means all of them on the right, though they mostly do a better job of disguising it, because they paid some attention when they were in college to what it normally looks like). If you analyze it, the argument falls to pieces pretty much instantly (if he had used advanced computer graphics to draw that line or a more realistic-looking one, it would have been equally fictional, and just as easily exposed—just not as much fun for the late night comics and Twitter artists). It's not real.