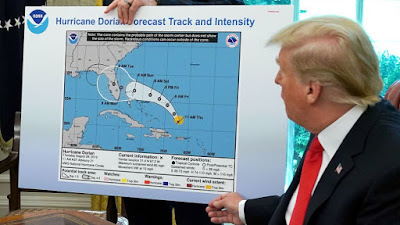 The emperor knows he has no clothes on. In fact he likes the way he looks naked, though it is not conventionally attractive, and he wants everybody to see it, shocked and awed by the monumentality of his flesh. But it's not what he wants them to talk about. That wouldn't be humiliating enough. He wants them to abjectly accept that he's wearing clothes when they can see plainly that he isn't. That's the deal.

Jonathan Chait writes that Trump has "figured out how to corrupt the entire government":


Donald Trump came to the presidency a complete novice to government and often found his corrupt, authoritarian impulses frustrated by its bureaucracy. But he is slowly learning how to control the machine that has stymied him. This is the story of 2019, as Trump has replaced institutionalists attempting to curtail his grossest instincts with loyalists happy to indulge them. It is playing out across multiple dimensions. This is the through-line between several seemingly disconnected episodes from the last several days.

And adduces the Sharpie embellishment of the hurricane map, where he demonstrateed that Dorian might have hit Alabama by tampering with a weather map to include a bit of the state, but what strikes me is how little effort Trump bothers to make to convince anybody, with that extraneous black outline of a bulb that could not possibly have any relationship to the weather system of the cone. Not only does he not care if we can see it's a fake, it's almost as if he wants us to see it's a fake and then keep it quiet.

And even when he gets hold of some better-looking evidence he's not really trying, or expecting his henchmen to try:

Donald, that says there was a 5-10% chance that it might touch Alabama and a 90%+ chance that it would go where it actually went. It was almost as unlikely to hit Alabama as you were to get elected in 2016, and it wasn't getting any Russian help.
— Flaming Dancer (@Yastreblyansky) September 5, 2019


He's expecting us to say "Uncle."
He knows that professionals of the NOAA know he's faking, and he orders them to keep it quiet:


In an agencywide directive sent Sept. 1 to National Weather Service personnel, hours after Trump asserted, with no evidence, that Alabama “would most likely be hit (much) harder than anticipated,” staff was told to “only stick with official National Hurricane Center forecasts if questions arise from some national level social media posts which hit the news this afternoon.”

They were also told not to “provide any opinion,” according to a copy of the email obtained by The Washington Post.

A NOAA meteorologist who spoke on the condition of anonymity for fear of retribution said the note, understood internally to be referring to Trump, came after the National Weather Service office in Birmingham contradicted Trump by tweeting Alabama would “NOT see any impacts from the hurricane.”


Mr. Ross, the commerce secretary, intervened two days later, early last Friday, according to the three people familiar with his actions. Mr. Ross phoned Neil Jacobs, the acting administrator of NOAA, from Greece where the secretary was traveling for meetings and instructed Dr. Jacobs to fix the agency’s perceived contradiction of the president.

Dr. Jacobs objected to the demand and was told that the political staff at NOAA would be fired if the situation was not fixed, according to the three individuals, who requested anonymity because they were not authorized to discuss the episode.

Does trump really imagine the story's not going to come out? The story always comes out, and there's a little flurry in the press, when he lays a gag order on administration scientists, or fires a lawyer for telling him one of his proposals is unconstitutional, and then when the dust clears he's always gotten away with it.

Steve had another example today:


We know that Trump craves approval -- but the things he does to win approval inspire disapproval. He insists on a ridiculous hairstyle and an embarrassingly fake skin tone so people won't think he is what he is -- a 73-year-old man with something less than a full head of hair. Has he not noticed that many balding septuagenarians have been respected and loved throughout history despite making no effort to conceal their age? Why does he do this?

Steve says he's an "inept narcissist" who wants to make people love him but keeps doing it wrong. I'm starting to think he's a sadist, who wants to show his power over us by forcing us to take every idiocy he can come up with. Like Caligula nominating his horse Incitatus to the consulship—you think that shows how crazy he is, but the main thing is that if you criticize him publicly for doing it he may have you killed and your whole family dispossessed. Caligula wants to see the fear in the faces of the courtiers, and their humiliation as they pretend to be OK with this abomination.

He knows he's not a Roman emperor and can't control everybody, but he surrounds himself with people he can control, henchmen and minions and suitors and ambassadors, and the news reporters, who are sworn not to take sides no matter how great the provocation. He surrounds himself with people whose livelihoods depend on him, and he treats them all that way. I think it's what he does for pleasure.

But I wonder how Wilbur Ross feels, inside, as he carries out the emperor's absurd orders, or Vice President Pence:

Or how do you suppose they feel at Fox about this demonstration of our president's extraordinary vigor?

Looks like Fox News is speeding up footage of Trump walking so he doesn't seem so slovenly... pic.twitter.com/l0dSrFgb75
— Oliver Willis (@owillis) September 9, 2019