Like everybody else, I've gotten pretty shy about predicting the Trump's imminent demise, but I'm wondering if it may finally have begun this week, with his national approval numbers falling to extraordinary levels (30 to 63% underwater) and signs of struggle for him in upcoming primaries from Wisconsin through Pennsylvania to California, as reported by Steve M.

If it has, I'd ascribe it in part to something that goes along with Steve's General Theory of Trumpativity, according to which what his voters like in particular is his brazen certainly that he's always right and refusal to back down from anything he says, no matter how idiotic, unless by blanket denial that he actually said it. Because he was nothing like that backing off from his earlier assertion that women needed to be punished for getting abortions:

“A question was asked to me,” Mr. Trump told the CBS host John Dickerson. “And it was asked in a very hypothetical. And it was said, ‘Illegal, illegal.’ ”

When asked how he would further restrict abortion, Mr. Trump said, “The laws are set now on abortion and that’s the way they’re going to remain until they’re changed.”

“I would’ve preferred states’ rights,” he added, saying that the laws now “are set.” “And I think we have to leave it that way.”

I.e., he only meant women should be punished for getting abortions if it was illegal, as a purely theoretical matter, since the federal law is now "set", like a custard, although that's unfortunate, since he would rather the state governments had the power to make abortion illegal, and the situation will stay that way until it becomes different, and who knows when that will happen, so he's claiming that his answer was correct but completely trivial, which is not very assertive-sounding, while also suggesting that it might not be trivial some time in the future, in which case what he said might suddenly turn out to be a lie—he's willing to commit to what he'd do in an imaginary situation, but what he'd do a real situation might be different. But worse yet was to come:

“Do you think abortion is murder?” Mr. Dickerson asked.

“I have my opinions on it, but I’d rather not comment on it,” Mr. Trump said.

Donald the Trump has opinions that he would rather not comment on? Because it wasn't "an appropriate forum"! And when pressed to explain whether he disagreed with the proposition that abortion was murder, he could only cling to the ambivalence of the double negative like a shipwrecked water-treader to a piece of wooden débris, "No, I don't disagree with it."

To me, the whole exchange smells of that typical Republican-politician fear sweat, the thing that sank Rubio, the anxiety that comes from having to please four or five different constituencies that are all insane in different ways. And the thing Trump's been free from, with his loyalty to any stupid thing that pops into his head. If he's feeling that fear now, his followers are going to scent it, and they're going to desert.

What was wrong with his original statement wasn't, of course, that he shouldn't believe in punishing women for having abortions; it was that he shouldn't say it, thus threatening the entire false-consciousness edifice on which postmodern "pro-life" thinking is constructed. The Movement had to send out a damage control operation, which I caught on NPR Thursday morning, where it was represented by Marjorie Dannenfelser of the "Susan B. Anthony List" forced-birth fundraising grift and the corollary "Feminists for Life" (FFL):


the pro-life movement has never, for a very good reason, promoted the idea that we punish women. In fact, we believe that women are being punished before the abortion ever occurs.

God punishes them in advance, just in case the procedure kills them and they escape the consequences that way, so society doesn't have to? That's convenient. It's also senseless. Note she doesn't say the movement doesn't have the idea but that it doesn't promote it, the real "very good reason" being, of course, that that would make them unpopular.


The aims of the pro-life movement are focused on the woman and the child, and to take them together as a goal, as an end is - to preserve both is what it's been from the beginning...

Except when they give implicit preference to the life of the fetus:


With respect to abortions allegedly required to save the life of the mother, FFL states that it "refuse[s] to choose between women and children".[17] FFL contends that doctors sometimes advise abortion because "they are unaware of other options or because they are pressured by fear of malpractice suits". FFL argues that physicians "should treat both patients and do what they can to save both lives [because] [t]his is what was done before the Roe decision was handed down".

The Susan B. Anthony List's shtik is that their conservative, forced-birth feminism is the 19th-century True Feminism of Susan B. Anthony (the Mother of Us All) and Elizabeth Cady Stanton, a contention Dannenfelser herself has defended with some remarkable quotations from imaginary sources, per Wikipedia:


Dannenfelser said that while the pro-life cause was not "the issue that earned Susan B. Anthony her stripes in American history books [i.e., she never publicly mentioned it], historians would be wrong to conclude that Anthony was agnostic on the issue of abortion."[22] She quoted Anthony's business partner, Elizabeth Cady Stanton, who referred to both the killing of infants and abortion as "infanticide",[9] as saying, "When we consider that women are treated as property, it is degrading to women that we should treat our children as property to be disposed of as we see fit."[22] Attempts to authenticate this quote, however, have been unsuccessful. After Thomas notified the FFL in 2011 that she could not locate the source for this alleged quote,[29] the FFL acknowledged the problem by saying that, "Earlier generations of pro-life feminists informed us that these words were written by Elizabeth Cady Stanton, in a letter tucked into Julia Ward Howe’s diary on October 16, 1873," but that they could not locate the letter.[30] [Law Professor Tracy] Thomas and the FFL agree that Howe's entry in her diary for that same date, October 16, 1873, said that she had argued about infanticide with Stanton, who, according to Howe, "excused infanticide on the grounds that women did not want to bring moral monsters into the world, and said that these acts were regulated by natural law."

Chief evidence for Anthony's own forced-birth views is an article that appeared in her magazine The Revolution in 1869 under the byline "A.", which might have represented Anthony except that she is not known ever to have used it that way, and although the article is stuffed with "scriptural quotes and appeals to God" of a sort Anthony never used; decrying abortion and the social evils that caused it, though also opposing all legal prohibitions of abortion, which would fail to address the real problem of woman's powerlessness in the face of the careless seducer:


"Guilty? Yes, no matter what the motive, love of ease, or a desire to save from suffering the unborn innocent, the woman is awfully guilty who commits the deed. It will burden her conscience in life, it will burden her soul in death; but oh! thrice guilty is he who, for selfish gratification, heedless of her prayers, indifferent to her fate, drove her to the desperation which impelled her to the crime."[

Hilariously, Dannenfelser on NPR used a decontextualized phrase from the quotation to back up a completely different contention:


The real earliest roots of feminism and the women's movement really embraced the idea that her innermost soul, in Susan B. Anthony's words, recoil from the dreadful deed*, but thrice guilty is the one who drove her to the deed. And who is that? It's the abortionist.

Uh, no. "A." was referring to the dude who had impregnated our victim (the doctor wasn't driving her anywhere, to say nothing of doing the job for selfish gratification or heedless of her prayer—she was praying him or her to do it). And if you'd like to propose an abortion law that would punish him, let's hear what you have in mind.

Of course many fine voices (Katha Pollitt's for one) have been raised in the past couple of days to remind you that yes, the anti-abortion movement does want to punish women for getting abortions, and has been doing a better and better job of it in the last few years of Republican ascendancy. The aim of abortion prohibition is always to drive women back to the back alley or the coathanger. Asked about that on NPR, Dannenfelser hems and haws:


If those children are allowed to live and a woman is in need of help, there are hundreds of pregnancy care centers across the country, millions of people ready to come to her aid. So no, I don't believe that that's necessarily at all. And we're far more ready now then we were before Roe to help women and children in situations like that.... There's always a dreadful possibility that something terrible would happen no matter what a law is, but it is incumbent upon the pro-life movement and Americans in general to help a woman who is in that type of need.

Oh well, if it's incumbent. I'm sure that will take care of everything.

In the meantime, I just wanted to note that their research methods and linguistic usages are also pretty tortuous.

*Not Susan B. Anthony's words, as far as Dr. Google can determine, but maybe an allusion to Caroline Howard's "The Crying Bog: A Legend of Narragansett" (The Century Illustrated Monthly Magazine, 1888), on the subject of infanticide in the traditional sense, or tossing born babies into bogs: 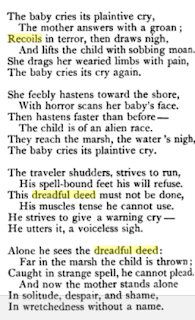 Update April 3: Steve notes one very Republican way Trump could have answered the question: by confessing to being involved in an abortion back in the days, say, when he was a celebrity swinging bachelor, and telling the nation how much his guilt and fatherly grief have made him suffer over the years. Maybe, though this is the man who couldn't imagine asking God for forgiveness since he makes an effort never to make any mistakes, and I can't see him bringing off a sin-and-redemption narrative now.

I think he'd have done at least as well doubling down, "Of course they should be punished if they've committed a crime," or saying he'd misheard the question. What I can't understand is why he didn't try any of these expedients. He seems to be losing his touch.