Who could have predicted

Speaking of blood-gargling psychopaths, I woke up this morning to a voice on NPR that sounded as if it was regretful about something that it did 10 years ago, but, pressed, dwindled into excuses about how they were all doing their best on the basis of the information that was available to them.


NPR "Morning Edition" host Renee Montagne asked, "Ten years later, nearly 5,000 American troops dead, thousands more with wounds, hundreds of thousands of Iraqis dead or wounded. When you think about this, was it worth it?"

"I've got to say, I think that is not a reasonable question. What we did at the time was done in the belief that it was necessary to protect this nation. You can't, a decade later, go back and say, 'Well, we shouldn't have done that.'" (Luke Johnson, Huffington Post)

It turned out to be that blood-squirting zombie squid Richard Perle, slanderer, fraud, coward, and confessed war criminal. (Of course NPR always presents a balance of views, so I'm sure we'll hear from the other side soon, maybe those soi-disant "harsh critics" Kenneth Pollack and Michael O'Hanlon.)

Who could have imagined that invading Iraq would turn out to be more trouble than it was worth? Here's a picture of me and four or five hundred thousand of my closest friends, on February 15 2003: 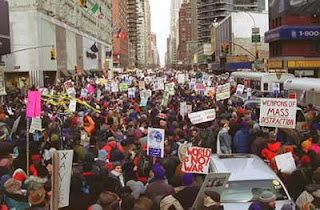 That's who. We were making a lot of noise, too.

Everything else that needs to be said is in soonergrunt's beautiful brief essay.

Email ThisBlogThis!Share to TwitterShare to FacebookShare to Pinterest
Posted by Yastreblyansky at 2:27 PM Labels: I was proved fucking right