Snowstorm Saturn showed up at last, a day late and approximately a dollar short I suppose, its projected accumulation diminishing from five inches at peak to one-to-three at closing to approximately nothing now that it's been and gone. It made me wonder: is this an effect of the Dread Sequester, as in qualified meteorologists have had to be laid off and now the National Weather Service is in the hands of management, who are excellent at silly marketing-based propositions like giving every storm a name, but maybe not so hot at prediction? Just asking.

The House of Zombie Representatives has attempted to defund ACORN:


WASHINGTON -- A new short-term budget bill introduced on Monday by House Republicans includes a bizarre provision banning federal funding to anti-poverty group ACORN, despite the fact that the group has already been stripped of federal funding -- and has been defunct for nearly three years.

ACORN leaders announced that the group was disbanding in March 2010, after Congress cut off all federal funding to the organization. The provision in the current GOP budget bill [PDF], buried on page 221 of 269, would duplicate legislation that has already passed, to target an organization that does not exist. (Zach Carter for Huffington PostAlso, from ThinkProgress:

Meanwhile, in foreign policy news, Rep. Peter King has issued a call for Carthage to be destroyed. No, I'm kidding. Really.
But then, from ThinkProgress:

It turns out that the headline is maybe putting it a little too strongly; I'm not sure if the Republicans know that Obamacare includes insurance coverage for people with pre-existing conditions starting next year, but they do apparently know about the interim Pre-Existing Condition Insurance Plan, which is not working because it insures only people with pre-existing conditions, so of course nobody can afford the premiums. So the Republicans have decided it should be extended instead of allowed to die, I guess because they hate deficits so much.

Meanwhile, the president's little souper intime with the Republican senators yielded to the press the information that some of those senators haven't actually heard about what the president has been proposing, whether out of general epistemic closure or whether McConnell is maintaining an index of forbidden literature. Here's Ezra Klein:

It was serious. It was respectful. And it was informative. (In fact, one senator told us that he learned, for the first time, the actual cuts that the president has put on the table. Leadership hadn’t shared that list with them before).

The number of Republicans who don’t know what the White House is actually offering is stunning. Last week I wrote about a Republican legislator who didn’t know Obama had publicly said he’d be willing to move to chained-CPI.

Would it matter, one reporter asked the veteran legislator, if the president were to put chained-CPI — a policy that reconfigures the way the government measures inflation and thus slows the growth of Social Security benefits — on the table?
“Absolutely,” the legislator said. “That’s serious.”
Another reporter jumped in. “But it is on the table! They tell us three times a day that they want to do chained-CPI.”
“Who wants to do it?” said the legislator.
“The president,” replied the reporter.
“I’d love to see it,” laughed the legislator.

The rules of that meeting prevent me from saying which legislator this was. But suffice to say that it’s not a legislator who you’d expect to be fuzzy on the details of the White House’s offer.

Oh, and don't forget Senator Rand Paul, channeling Jimmy Stewart on the Senate floor for 13 hours trying to force the attorney general to come out and say one way or another whether he believes the president is allowed to drone-bomb Jane Fonda. (Turns out the answer is no, as long as she's not in combat. Which is somewhat reassuring to me, I'm not going to lie. Although they still haven't explained how they know whether you're in combat or not, which is the part that makes me nervous. I was never really worried about old Jane, God love her.) 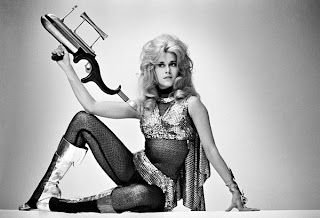 Email ThisBlogThis!Share to TwitterShare to FacebookShare to Pinterest
Posted by Yastreblyansky at 8:35 PM Labels: cheap shots