.....Our massive testing capability, rather than being praised, is used by the Lamestream Media and their partner, the Do Nothing Radical Left Democrats, as a point of scorn. This testing, and what we have so quickly done, is used as a Fake News weapon. Sad!

We have more Cases because we do more Testing. It’s Lamestream Media Gold!

Wrong! We have more cases because we have tested far more than any other country, 60,000,000. If we tested less, there would be less cases. How did Italy, France & Spain do? Now Europe sadly has flare ups. Most of our governors worked hard & smart. We will come back STRONG!

"Think of this, if we didn’t do testing, instead of testing over 40 million people, if we did half the testing we would have half the cases,” Trump said at a press conference at the White House. “If we did another, you cut that in half, we would have, yet again, half of that. But the headlines are always testing." (CNBC) 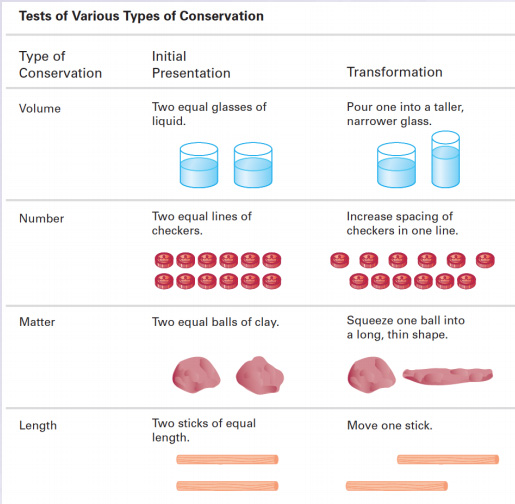 In insisting that the number of cases is purely a function of the number of tests, Trump is acting exactly like the pre-operational child in Piaget's theory of cognitive development who insists that the volume of water in a glass is purely a function of the height of the glass.
It's silly to say the kid believes the researcher magically transformed the amount of water by pouring it from one glass into the other, and it would be equally silly to say Trump believes the tests magically cause the disease, but it's tantamount to the same thing. Just as we've seen with his insistence that the proportion of red to blue on the 2016 electoral map proves he won the election in a way that's belied by the actual numbers. He's locked into a vision of the world in which conservation and object permanence don't obtain, a world so unstable that the magic might just as well be real.

It's really interesting; he lacks a fully-formed object permanence, so a visible maiming (lost arm or leg) is more real to him than an invisible one (TBI). https://t.co/5kUS7NxNMH our toddler president @DanielDale

And with that failure to mature into the concrete operational stage and beyond to abstract thinking, a more sinister development from toddler egocentrism:

We estimate about 5% of adults in a modern society would be found to reason primarily at this stage. At this stage, the individual integrates the perspective of another with their own perspective, and so they can make a deal in which both people benefit. A hallmark of the concrete operational period is to know who cares and who does not. Many of the people in jail (drug dealers, pimps, prostitutes) perform at the concrete operational stage of attachment. Prostitutes functioning at this stage engage in quid pro quo (money for sex). These individuals know the deal, but they do not understand the social norms that forbid such deals even though they can state such norms. That is, their social behavior is based on deals with individuals, but they do not think more generally of what others, even in their own social group, might think. Another example of a concrete person is an individual who has sex with an underage girl. The girl might agree to the sexual encounter, but they do not understand that they are breaking the social norm against sex with underage people. This type of conception of attachment relationships can also be seen in at least some narcissists and psychopaths.  (Michael Lamport Commons and Patrice Marie Miller 2007, How Early Negative Caregiving Experiences Relate to Stage of Attachment)