David Brooks suggests in his concern-troll headline that Democrats are doing it wrong  ("Are Democrats Going to Give This Election Away?"), but the column seems to be all about how Emperor Trump is doing it right: "this was the most politically successful week of Trump's presidency."

One of the odder reasons is this one:


Fourth, Trump has cleverly reframed the election. I can see why Nancy Pelosi ripped up his State of the Union speech. It was the most effective speech of the Trump presidency.

In 2016, Trump ran a dark, fear-driven “American carnage” campaign. His 2016 convention speech was all about crime, violence and menace. The theme of this week’s speech was mostly upbeat “Morning in America.”

As Steve points out, all the memorable parts of the speech were about crime, violence, and menace, from immigrants penetrating inside our borders and terrorists outside and the need for constant vigilance and  retribution, and I'd add that the optimism supplied by that cheery alliteratonist Stephen Miller certainly wasn't very convincing—

We must choose between greatness or gridlock, results or resistance, vision or vengeance, incredible progress or pointless destruction.

Tonight, I ask you to choose greatness....

We do the incredible.  We defy the impossible.  We conquer the unknown.

I think Brooks got his idea by not watching the speech but looking at the prepublicity, like this from PBS on Tuesday morning:


On the brink of his Senate acquittal, President Donald Trump will be unleashing “relentless optimism” during his third State of the Union address, a speech designed to pivot from his impeachment to his drive for reelection. Trump is speaking from a position of strength, with nearly complete control of the Republican Party. The theme of his speech: “The Great American Comeback.”

Plus just making it up:


Trump’s speech reframes the election around this core question: Is capitalism basically working or is it basically broken?

The speech did nothing of the sort. It was framed it around Trump's personal magical abilities, which accomplish what nobody has ever seen under capitalism or even imagined:


In just over two years since the election, we have launched an unprecedented economic boom — a boom that has rarely been seen before.  There’s been nothing like it.... The U.S. economy is growing almost twice as fast today as when I took office.  And we are considered, far and away, the hottest economy anywhere in the world.  Not even close.

Steve also points out the Brooks filed his column (expressing the possibility that Trump might "keep this tone" and "keep his ideology anodyne") after Trump's Thursday follow-up to the SOTU at the National Prayer Breakfast and its press availability aftermath, which old Charlie Sykes calls


a raw, bitter, unhinged rant of crazy. Two of them, in fact. And it was all perfectly on brand.

So it seems clear that Brooks hasn't in fact been paying any attention to Trump at all and definitely didn't see the SOTU itself. even though he gives it a rave review.

Which makes some sense, because he's not interested in Trump. He's particularly interested in telling Democrats to stop talking trash about capitalism:


It’s hard to defeat a president in good times. U.C.L.A. political scientist Lynn Vavreck, the author of “The Message Matters” and a co-author of “Identity Crisis,” has found that the rare candidates who do succeed find issues that voters care about just as much. In 1960, John Kennedy ran on the missile gap. In 1968, Richard Nixon ran on law and order. In 2016, Trump ran on Middle America identity politics.

Actually a recession started in April 1960 and went on for two quarters, with employment starting to recover only well after Kennedy's inauguration, and the Kennedy campaign gave it plenty of air time:


The recession of 1960-1961 was mainly due to the high inflation, high unemployment rates, and a bad gross national product rating. This recession lasted for 10 months and resulted in the second longest economic expansion in U.S. history. During Kennedy’s 1960 presidential campaign he sought to accelerate economic growth by increasing government spending and cutting taxes, and increased funds for education. The GDP of the United States during this period fell 1.6%, and the unemployment rate hit its peak at 7.1%.

And while hardly anybody remembers, thanks to the other tumults of 1968, assassinations, riots, and virtual civil war during the Democratic convention, the year started with economic crisis: 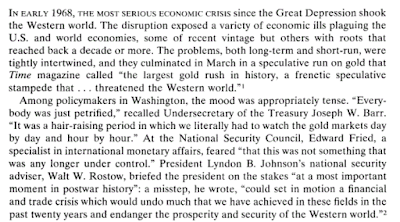 And Trump, I hardly need remind you, didn't win (neither did JFK, in some views), and it's certain that nobody in 2016 was satisfied with the maddeningly slow recovery (held back of course by Boehner's and McConnell's stranglehold on the federal purse strings, see Dr. Krugman today). Also this week we hear odds of a recession in the next six months are at 70%.

So naturally Brooks thinks Democrats should campaign on what a great job Trump has done with the economy and offer a "moral and social revival" instead.


Democrats should acknowledge that the economy has done well since the Obama recovery in 2009. They should argue that this is the time to take advantage of prosperity to begin a moral and social revival. This is the year to run a values campaign, one that champions policies to make America more socially mobile, caring and interdependent.

The economic critique offered by pretty much all of the Democrats this year is for a moral and social revival, but not of the kind that Brooks is equipped to recognize, because he has no sense of justice, in addition to having no sense period.