This is not the way to bring an end to class

Hey, guys, it turns out inequality is really bad! Not only for you and me and the rest of the great mediocre majority who never get a chance to rule the world, but even for the brilliant Ivy-trained wizards who do rule it! They have to work too hard, and it's ruining their lives! Meanwhile, I've learned that there are these things called state universities! They have one in Arizona! I got to visit it last spring and it knocked my socks off. Instead of doing all they can to keep people out, they keep trying to get more people in, and instead of getting worse from letting all those mediocre people in, it gets better. This could be a game-changer!

He's come to some clarity on the subject of what it is he hates about meritocracy, thanks to the book Brooksy has read the first 20 pages of for Friday's column, The Meritocracy Trap: How America's Foundational Myth Feeds Inequality, Dismantles the Middle Class, and Devours the Elite, by Daniel Markovits, a Yale law professor who is, according to the publisher blurb, "well placed to expose the sham of meritocracy. Having spent his life at elite universities, he knows from the inside the corrosive system we are trapped within." Well, speak for yourself, pal. If the rest of us peasants only know if from the outside, then we're not trapped within it. And if we're all trapped within it, then his experience isn't that special.

As a matter of fact it sounds like a pretty fierce indictment of something. As Thomas Frank writes, reviewing the book for The Times,

On the surface, meritocracy seems fair, but in reality, Markovits writes, what we call merit is “a pretense, constructed to rationalize an unjust distribution of advantage.” If you know what you’re doing and if you have enough money to spend on expensive tutors and prep schools, the meritocracy is easily gamed — which basically ensures that people who are rich because they went to a fancy school will have kids who will also go to fancy schools and thus also become rich. In this way and over the years, meritocracy has become the opposite of what it purports to be: It is “a mechanism for the concentration and dynastic transmission of wealth, privilege and caste across generations.”

What poor Brooks has never understood is that it really is a sham, and the kids who get into Harvard and Yale and end up in the big law and finance and tech firms aren't actually better than everybody else. He himself is overwhelmed by their greatness:


People in this caste work phenomenally hard to build their wealth. As Daniel Markovits notes in his powerful new book, “The Meritocracy Trap,” between 1979 and 2006, the percentage of workers in the top quintile of earners who work more than 50 hours a week nearly doubled.

People in this caste are super-skilled and productive. There are more than 70 law firms, Markovits notes, that generate over $1 million in annual profit per partner. When Instagram was bought by Facebook for $1 billion, it had only 13 full-time employees.

While people like himself, with his safety-school education ("The University of Chicago admitted 71 percent of its applicants as recently as 1995," writes Markovits in an Atlantic piece, as it happens, though the safety-school days are apparently over: "In 2019 it admitted less than 6 percent") and low energy, are condemned to spending their lives in a second-string operation like newspaper publishing!

Overwhelmed but at the same time extremely resentful, because on the minus side those superskilled and productive meritocrats are responsible for increasing inequality, even though they blame it all on the capitalists:


A few years ago, people in this elite professional caste seized on research by Thomas Piketty, who argued that rising inequality is caused by the shift in income away from labor and toward capital. The investors are to blame! But, Markovits argues, roughly 75 percent of the increase in the top 1 percent of earnings is caused by shifts in income within labor. These highly educated professionals attract vast earnings while everybody else gets left behind. A cardiologist used to earn four times as much as a nurse; now it’s seven times as much.

Now wait just a darn minute! What people in this elite professional class were those? What 50-hour-a-week bankers and tax attorneys took up chatting about Piketty as a way of deflecting the blame from themselves? Are you subtweeting Professor Krugman here? (I doubt he makes more money  with his real academic gig at the City University of New York's Stone Center on Socio-Economic Inequality than Brooks, now that Brooks has a spot at the Aspen Institute, but he certainly works a lot harder.) And why would he be attacking the investors of the One Percent to defend the employees of the One Percent?

Brooks has the thing somewhat wrong, of course. What Markovits thinks about Piketty is that progressives, not necessarily "meritocrats", are interested in defending a theoretical perspective on the insatiably grasping character of capital in terms of class relations, by attempting to "explain rising inequality in terms of labor's (especially organized labor's) demise and capital's resurgence", which would contradict Markovits's thesis that we've moved from a class system to a "meritocracy" in the strictest sense of the term: 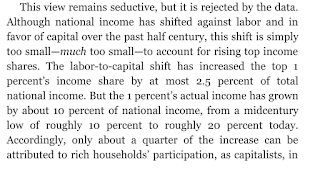 This is nonsense, and I'll tell you why: in the first place, because being a capitalist rather than a wage-slave doesn't mean being an old lady living off the rents of a fixed estate, but acquiring more capital as you can, and that's what the insane wages of the very richest "meritocrats", skimmed off the profits of their companies, do: the bulk of them come in the form of company stock and the like, and practically all you can hold back from the taxman or charity goes to investment of one kind and another, whether it's the financial portfolio or real estate or fine art and horses and boats. And in the second place that it's not so much driven by the 1%, which starts at relatively modest incomes like $421,926 in 2017, but the 0.1%, 0.01% and more, where things start to look pretty different.

The higher up on that scale you go, the more the people you're talking about are paying those wages to themselves, as business income, and not wages at all in the conventional sense:


Smith, Yagan, Zidar, and Zwick find that the 1 percent’s income is being driven by owner-managers, mostly of small and medium-sized companies—specifically S corporations, partnerships, and limited liability companies....

The average company in the top 1 percent of income has $7 million in sales and 57 employees, according to the research. “If that firm has, say, a 10 percent profit margin to split between two owners, it’s enough to put someone in the top 1 percent category,” says Zwick. The businesses earning the most profits in the bulk of the top 1 percent were physicians’ and dentists’ offices, professional and technical services, specialty trade contractors, and legal services.

To reach the top 0.1 percent of income, the average company has $30 million in sales and 150 employees. “If you’re an auto dealer and you have five or six dealerships and you’re doing $30 million in sales, you have a bunch of workers and you split $3 million in profits between one or two owners, that would put you in that top 0.1 percent group,” says Zwick. In the top 0.1 percent, physicians’ offices ranked only sixth in profits—behind managements of private companies, financial and investment activities, auto dealers, professional and technical services, and oil and gas extraction. It’s harder to get at the source of income for the top 0.01 percent, but several studies indicate that finance could be an important sector for the group....

But the measures Markovits uses don't distinguish that kind of income from the income of the ordinary employee, and thus he misses the degree to which it's a direct return on investment as opposed to showing up and working (less so for the doctors and dentists, who certainly do work incredibly hard, more for the managers of professional services, auto dealers, and hedge fund operators, who don't).

So in general the work done by the people at the very top of the income ladder goes directly to capital formation, and the increase of capital as opposed to labor income, so it's kind of silly to insist that capitalists don't exist, no matter where they went to school.

Another point is that the training of young meritocrats is clearly a capital investment and to be seen as such, part of what Marxists call the reproduction of class relations, as even Brooks seems to intuitively understand:


Parents in the exclusive meritocracy raise their kids to be fit fighters within it. Markovits calculates how much affluent parents invest on their kids’ human capital, over and above what middle-class parents can afford to invest. He concludes that affluent parents invest $10 million more per child. The resulting highly honed, high-performing young people are amazing — and endure the stresses you’d expect. At the best law school in the country, Yale, 70 percent of the students say they experience mental health challenges.

If you have that $10 million, the kind of money Felicity Huffman seems to have been ready to spend for her offspring, you must know that you are perpetuating an aristocracy by birth by any means necessary, and you must know that the kids aren't born superior. And if the young folk suffer under the pressure, only to graduate into jobs where the pressure is worse, what that shows is that it shouldn't be happening, as Markovits himself says in the Atlantic article:


The elite should not—they have no right to—expect sympathy from those who remain excluded from the privileges and benefits of high caste. But ignoring how oppressive meritocracy is for the rich is a mistake. The rich now dominate society not idly but effortfully. The familiar arguments that once defeated aristocratic inequality do not apply to an economic system based on rewarding effort and skill. The relentless work of the hundred-hour-a-week banker inoculates her against charges of unearned advantage. Better, then, to convince the rich that all their work isn’t actually paying off.

And I'm sympathetic to what Markovits recommends, as far as it goes:


For one thing, education—whose benefits are concentrated in the extravagantly trained children of rich parents—must become open and inclusive. Private schools and universities should lose their tax-exempt status unless at least half of their students come from families in the bottom two-thirds of the income distribution. And public subsidies should encourage schools to meet this requirement by expanding enrollment.

A parallel policy agenda must reform work, by favoring goods and services produced by workers who do not have elaborate training or fancy degrees.

But such reforms have been going on for years (the examples Markovits gives, of nurse practitioners taking over some doctors' duties and paralegals getting wider responsibilities, are happening everywhere, as sole-proprietor and partnership practices give way to the clinic model, and a good thing that is too). And the reforms in the education system have been carried out in a fairly nasty way, with a focus on saving money (in particular with online courses, which are a huge part of what Brooks got so excited about at Arizona State).

But the major lesson is, as usual, you don't need to pay Brooks any attention. Another useful Markovits source is an interview at Jacobin in which he explains his own approach to being a liberal and a radical at the same time, a project that obviously appeals to me even when I'm most disagreeing with him.