Sad to see a group of relentlessly dishonest people get tripped up by their habit of deliberately cultivating a base of gullible dupes. https://t.co/NL2IUqaCg7
— Matthew Yglesias (@mattyglesias) September 18, 2018

The thing is, they may well believe it themselves.

A good con man always believes the spiel, at some level, as in the thing I wanted to talk about, the plan Trump announced Monday for declassifying a host of Mueller-relevant documents, where I think they've really gaslit not just their followers but themselves—Nunes and Gaetz and Trump himself in particular. Once again, as with the Glenn Simpson testimony and the Peter Strzok testimony and the first unveiling of the Carter Page FISC application, they're going to open up a box without knowing what's in it, because they've gone and persuaded themselves, for at least the fourth, fifth, and six times during this circus, that they do know.

I'll tell you what's in pages 10-12 and 17-34 of the application for the third renewal of the FISA surveillance order on Trump's former "foreign policy" "adviser"  Carter Page, Ph.D., dated June 2017 (starting on p. 392 of the application as published in July), as demanded in Trump's order, if you want. 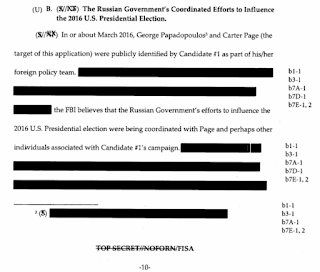 The redacted parts on the first group of pages include summary information on the various government-connected Russians Page found himself in association with over the past five years, including no doubt the guys (Viktor Podobny and Igor Sporyshev) who tried to recruit him as an agent in 2013 and possibly the ones he's alleged in the Steele dossier to have met with in July 2016, Putin's chief for US intelligence collection Igor Diveykin and the Rosneft head Igor Sechin, but very likely somebody else we may not know about. And the bigger bunch details information about these relationships gleaned from Page's interview with the FBI, and from the Steele dossier (source #1), and in the blacked-out bits  (I think) something else we definitely don't know about, the other US intelligence sources who were watching Page in Moscow in July 2016, and further detail and corroborating detail about what he was up to, including on Page's contacts with Diveykin and Sechin, if any, and also with those other people, if they exist. 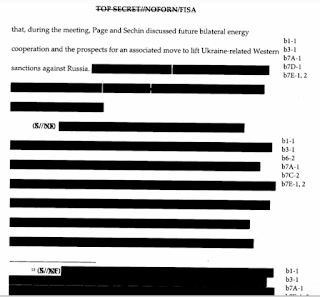 I'd love to see it, too, and so would lots of us, but there is really a reason why this stuff is classified, or there probably is (we know how intelligence services overdo classification), and what it probably is is that this information was collected by people and through means that we in the greater public are not supposed to know about; it's because these materials can't easily be presented without reference to the "sources and methods" that were used to obtain them. I keep thinking about the Iran network run by Valerie Plame that was disrupted when Dick Cheney decided to out her for political reasons of his own, without a thought to our need for solid information from Iran or to the brave Iranians who were doing the work, not imagining that Cheney and Libby and the rest of them might be selling them out at any moment.

And you know who would love to know more about the deployment and tradecraft of US assets in Moscow? I'm not saying, but his name and patronymic are Vladimir Vladimirovich and he didn't write Lolita. (I do hope the Mueller report will find some language in which to make this clear.)

What the unredacted order won't show is what Gaetz and Nunes are hoping to see, evidence that the Mueller investigation is the outcome of a dastardly plot to prevent Trump from getting elected, because it isn't: like all good criminal investigations, it's the outcome of people becoming aware of criminal activity and working with the authorities to figure out what's going on. But that won't stop them!

It's getting to be a pattern. When Senate Judiciary released the Glenn Simpson testimony in January, the Republicans under the impression that this would reveal Simpson and Christopher Steele as hired guns up to who knew what sort of ruthless skullduggery in the effort to defeat Trump, and instead it turned out Simpson and Steele were increasingly more concerned about the gradual realization that they were witnessing an ongoing crime than about their money:


Simpson okayed Steele taking it to a contact in the FBI because Steele had better connections there than he did.

“I don’t remember the exact sequence of these events, but my recollection is I questioned how we would do that because I don’t know anyone there that I could report something like this to and be believed and I didn’t really think it was necessarily appropriate for me to do that. In any event, he said don’t worry about that, I know the perfect person, I have a contact there, they’ll listen to me, they know who I am, I’ll take care of it. I said okay. You know, I agreed, it’s potentially a crime in progress. So, you know, if we can do that in the most appropriate way, I said it was okay for him to do that,” he said.

(That "perfect person" seems to be the earliest sighting of the role of Bruce Ohr, DOJ expert in the Russian mob who'd gotten to know Steele over the subject when Steele was in MI6. Note that although Ohr's wife is at this point in time or has been recently working in Simpson's shop, he doesn't think of talking to Ohr himself or apparently know who Steele's talking about. Our congressional sleuths would certainly cite this as evidence of the conspiracy—"Why is he hiding Ohr's name?")

Or the Peter Strzok hearing in July,

The contrast here is pretty stark:

GOP in one breath threatens Strzok with contempt if he doesn't detail Russia investigation, which is ongoing.

Then it says it won't release transcript of Strzok's initial testimony ... because its investigation is ongoing.
— Aaron Blake (@AaronBlake) July 12, 2018


Or the Carter Page surveillance documents in the redacted version, which simply proved that an FBI investigation of the Trump campaign's Russia connections had begun months before the Steele dossier, with the WikiLeaks release of the DNC emails prompting an examination of George Papadopoulos and his behavior in April...

But they never really fall into any perceptible doubt over these things—they just sputter for a while insisting they were right and then gallop over to some other mound on the battlefield.

When that Red Wave doesn't arrive in November, they'll go back to talking about millions of illegal voters, or dead ones, and insist that they "really" won. When Mueller's report comes out, their belief in the conspiracy against our emperor won't be shaken at all—it'll be reinforced ("It's even worse than I thought!"). I'm really hopeful, though, that these paranoids will become more and more marginal as time goes on and retreat into the cells, like the John Birch Society, where they used to hide before the Reagan election brought them into polite society.