The Washington Times ventures into the realm of linguistics:

A research paper by a team of University of Chicago political scientists found that liberals and conservatives, in addition to all of their other differences, have distinct tendencies when it comes to choosing names for their newborns.

Names with the soft consonant “l” or that end in a long “a” — for example, President Obama’s daughter Malia — are more likely to be found in Democratic neighborhoods, while names with hard vowel sounds such as K, G or B — think former Alaska Gov. Sarah Palin’s sons Track and Trig — are more popular in Republican communities.

In fact the paper—"Liberellas versus Konservatives: Social Status, Ideology, and Birth
Names in the United States", by J. Eric Oliver, Thomas Wood, and Alexandra Bass—does not anywhere allege that /k/, /g/, and /b/ are vowels. Nor does it argue that conservatives give all their children boys' names (like Romney) and liberals give all their children girls' names (like Obama). For instance, Palin is a conservative but has given girls' names to some of her kids, though only the female ones. [jump]


"I'm worried about somebody in our government might kill him with a cruise missile or a drone missile," Paul said during an interview on Fox Business News. "I mean, we live in a bad time where American citizens don't even have rights and that they can be killed..."

Absolutely. Somebody in our government. We don't have any solid information on which departments, but it's clear there are tons of drone hobbyists spending their holidays taking potshots at US citizens in various world capitals. Hong Kong is perfect, because our spooks have learned to disguise drone death as a massive MSG attack.

And that Paul knows what he's talking about: wasn't he the first to discover the homosexual plot to murder him, by shaking his hand and passing on those gay cooties? 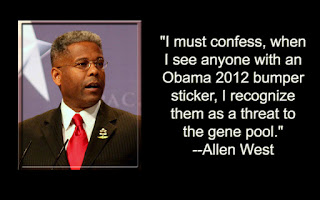 
Conservative actor John Ratzenberger, who is best known as the character “Cliff” from the television sitcom Cheers, on Friday called for former Rep. Allen West (R-FL) to take “something from his gene pool” and “put it everywhere across this great country.”

Heh. We could call him Allen Ampleseed.

Blessed are the meek.
Like me! I'm meek as shit!

Email ThisBlogThis!Share to TwitterShare to FacebookShare to Pinterest
Posted by Yastreblyansky at 9:47 AM Labels: cheap shots, linguistics, Ron Paul, Yale Professor of Humility