Slow burner
Have you ever read something extremely difficult—a paragraph, say, by Emanuel Kant—parsed it, and reread it until suddenly you had a clear idea what it meant? And then five minutes later you'd lost it?

Something like that seems to have happened to Representative Darryl Issa at a Bureau of Alcohol, Tobacco, and Firearms briefing in April 2010, when the Bureau's Fast and Furious program for tracing the paths of the illegal gun trade to Mexico was thoroughly explained. A few months afterwards he started asking questions about it, and he's never stopped since.


At the briefing last year, bureau officials laid out for Issa and other members of Congress from both parties details of several ATF investigations, including Fast and Furious, the sources said. For that program, the briefing covered how many guns had been bought by “straw purchasers,’’ the types of guns and how much money had been spent, said one source, who spoke on the condition of anonymity because the briefing was not public.

“All of the things [Issa] has been screaming about, he was briefed on,’’ said one source familiar with the session.

He must have had one of those moments at the briefing where he understood something for once, and he's been trying to recapture it ever since. That's why he can't explain to anybody what crime it is he thinks somebody committed—he hasn't got any idea. (h/t YAFB at Rumproast) 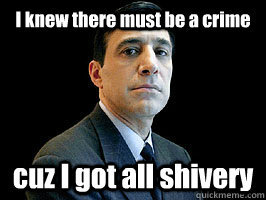 This chart is from Down with Tyranny—I don't know who's responsible for it. 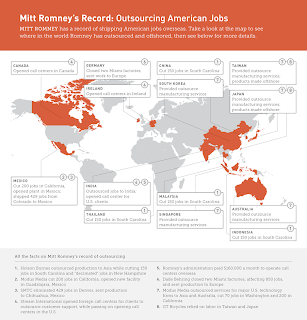 I'm embarrassed to say that it's totally false; Romney never outsourced any American jobs overseas, he only offshored them. It's really important to keep this clear, because it makes such a difference to the out-of-work Americans themselves to know they've been offshored but not outsourced. Doesn't it?

Speaking of the privileged
If you're too frivolous to read Emptywheel, you probably missed this rap video by Pakistani comedian Ali Gul Pir about the life of the "feudal's son". English titles (if you don't see them you should hit "CC" at the bottom of the screen).

Where is thy sting?
From Fortune Magazine's wonderful exposé of the ATF's Fast & Furious "scandal"


New facts are still coming to light—and will likely continue to do so with the Justice Department inspector general's report expected in coming months. Among the discoveries: Fast and Furious' top suspects—Sinaloa Cartel operatives and Mexican nationals who were providing the money, ordering the guns, and directing the recruitment of the straw purchasers—turned out to be FBI informants who were receiving money from the bureau. That came as news to the ATF agents in Group VII.

And these good folks aren't just complaining about the Affordable Care Act and socialist takeover and pernicious anticolonialism and all, they're doing something about it. They have such a surprise coming! (h/t Attaturk)