Walker is an obnoxious, hyperpartisan brute who exemplifies everything in movement conservatives I've been complaining about for years now, but you should vote for him because he thinks exactly the way I do. 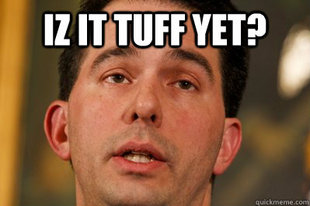 That's only part of the column; for the rest, Dean Baker offers an enjoyably acid takedown.

Walker himself won, of course, but not everybody believes it's because Wisconsin agrees with him, as Roy Edroso translated it into our language,


that the problem with our economy is that garbagemen and schoolteachers make too much money.

Zandar at Balloon Juice and assorted colleagues argue persuasively from exit polls that Wisconsin just doesn't like recalls. Then again it seems that this recall has given control of the state senate to Democrats, so Walker will not be able to railroad any more of his ghastly program through it.


Tonight, we tell Wisconsin, we tell our country and we tell people all across the globe that voters really do want leaders who stand up and make the tough decisions.

That "tough decisions" phrase has to be one of the most abused in the zombie rhetoric repertoire, by the way. It sounds like a brave decision made by a politician without regard to cheap popularity, a "profiles in courage" choice. But it is invariably used to describe a decision that is self-evidently bad—a bogus solution to a problem that may not even exist presented as the only alternative, like trying to jail all the undocumented immigrants in Arizona—to conform with some kind of pharisaically pinched, narrow-minded notion of moral hazard: cutting off somebody else's nose to spite your own face, and ensure the votes of the nastiest people in your constituency.

Another piece of zombie rhetoric was used this week by secretary of defense Leon Panetta:

Panetta is here answering, or refusing to answer, the question of  whether drone strikes in Pakistan violate that country's sovereignty. The usage, as a rhetorical trick, comes from Israel: every time the Israeli government is caught committing some abuse against somebody in the neighborhood they cry, "Israel has a right to defend itself."

The implication is always that this is a plea: justifiable crime, because it's self-defense. But they never actually argue it, because it isn't arguable—self-defense doesn't justify everything. If the United States is violating Pakistani sovereignty by dropping bombs there maybe it is truly somebody's idea of self-defense, but it's still violating Pakistani sovereignty nevertheless, and no amount of zombie rhetoric can change it.

In a criticism clearly aimed at the United States, Mr. Wu said at a news conference that the public release of air-quality data by foreign governments’ consulates “not only doesn’t abide by the spirits of the Vienna Convention on Diplomatic Relations and Vienna Convention on Consular Relations, but also violates relevant provisions of environmental protection.” (New York Times, June 6, 2012)

What's supposedly wrong with the data is that it's not "representative"—I guess in the sense that instead of building its consulates in a very large random sample of locations, the US puts them only in major cities, the very places most likely to suffer from pollution; you get no idea of the bracing atmosphere in Inner Mongolia or at the North Korean border, or the sultry breeze in semitropical Hainan.
What's really wrong is that it's data the Chinese government didn't get a chance to edit—those consulates are nothing but a bunch of truth terrorists. Anyway Wu's statement shouldn't be interpreted as some kind of threat; the vice minister simply wanted to clear the air, heh-heh.


Obama also has wrecked havoc in the the Democratic Party.

No, you do not wreck havoc. Unless the meaning is, "You had some perfectly good havoc in the Democratic Party, and he went and wrecked it." Which would be a pretty odd thing—talk about concern trolling!