In February 2003 I heard about MoveOn.org from a friend, went on my first demonstration in probably three decades (with the kids, then 11 and seven respectively), and started reading the online news with increasing devotion, beginning with Slate, because they had Doonesbury, through the early stages of the war in Iraq and the dreadful 2004 presidential campaign, as Kos and TPM became smoother and grander, and Huffington Post came into being (talk about a terrible beauty being born!), and the witty-left blogs hit their stride (though you already couldn't understand half of what they said if you didn't read The Corner, which I wouldn't dream of doing).

I didn't comment on any of these sites, let alone offering Kos any diaries, not only out of bashfulness, but because I had nothing to say that wasn't being said by somebody else, often better than I could have done it, and always in an astonishing quantity that made me suspect most of it was not being read anyhow--but I watched the world hungrily, like a cold child peering into a restaurant, wishing a bit that I could live there.

In February 2010 I began to notice that my voice was growing hoarser and hoarser, to the point where I could hardly speak sometimes, went to the doctor, quit smoking at long last, and found that there was a strange little growth on my larynx, a leukoplakia they called it, creamy white streaks along the vocal cords (I've kept the pictures). "The good news," they kept saying, "is that it's not cancer; the bad news is that we don't know what it is."

Voicelessness was an interesting condition and an important experience. I couldn't use the telephone for anything, and found myself doing crazy workarounds, like walking to the dentist's office to make an appointment. The hoarseness had a remarkable effect on my relationship with my son, then steaming into adolescence; I couldn't yell at him in any effective way, only hiss like Harry Potter speaking Parseltongue, which was unbearably comical, or go for the calmly superior approach, which was what had been needed all along--if not for my illness I might never have found out. Relationships outside the family, however, went somewhat dormant, too hard to maintain; I began writing a lot of email, all the same, and for the first time with the pleasure and thrill of danger that goes along with the way you publish yourself, online, with a single keystroke, ready or not.

In summer of 2011, with the fifth or so surgical intervention--I had an infection, apparently, and all the bits of my glottis were so swollen that I couldn't breathe, so they pushed a tracheostomy into my throat--my discreet leukoplakia began turning gray and tapioca-like, ugly and spreading. Now the good news was that they knew what was wrong, and the bad news--honestly, it wasn't bad news; it was cancer, but at a very early and easily treatable stage, and all I needed to do was obey instructions and employ my natural resilience.

It was around then that I opened up this space with some preliminary design and a post, irritated beyond measure by something Rick Perry had said. My extremely cool mother, actually, had begun blogging herself some months before, and I suppose I was jealous (she's still at it! more lyric than conventionally blogospherical, but full of surprises and beauties). But I couldn't even begin to keep it up, not with the work of not having cancer, a job in itself.

I finished the radiation in early November--cancer-free for Thanksgiving!--and got rid of the disgusting trach tube a month or so later. Then, a new job, that of feeling better; the radiation makes you sick at about the same speed as it cures you, so you need to recover from that, and the vocal cords in particular take a long time to become truly serviceable. I'm still not yelling at anybody, or chatting in bars either--I need as quiet a place to talk as I do to type. But nowadays I seem to have a lot of things I want to tell everybody, so here, inevitably, I am. 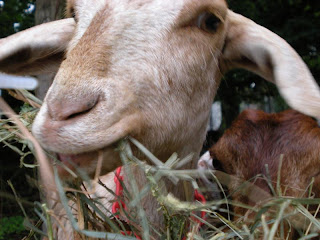 The nom de blogue Yastreblyansky comes from my grandfather, who arrived in Galveston, Texas (a draft dodger like me, one assumes, but also fleeing the 1903 pogrom of Kishinev/Chișinău) in the first decade of the 20th century with the name Алексей Ястреблянский, and headed northwards toward Minnesota as plain Alec Bloom (I'm David Bloom, out there in the ambient noise). The Rectification of Names (as discussed here) is a project of classical Chinese philosophy, in the way Tikkun olam/Repairing the world is a project of philosophical Judaism.