For the Record: Bad Boyfriend 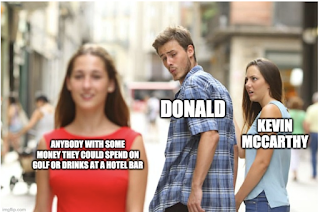 It's so pathetic. House Republican Congressional Committee is begging Trump campaign for a few dollars, out of the $295 million the campaign and the Republican National Committee are sitting on, and Kushner, who apparently "oversees such decisions and has a greater say than RNC Chairwoman Ronna McDaniel", just says no.
According to one anonymus,

“The campaign just wants the money. . . . They don’t care about the House — it’s not their concern,” one official close with the Trump campaign said. “When you’ve been working in politics for years, and you understand it’s a team sport, you kind of look at these things a little differently. I don’t think they see it that way.”

The refusal to help the NRCC is all the more striking because House Republicans in safe seats recently contributed to the president’s reelection, making donations of tens of thousands of dollars at the request of his campaign.

Not mentioned in WaPo's story (though WaPo's David Fahrenthold is the preeminent expert) is the list of contributions the Republican party has been making to Donald Trump's personal income, now upwards of $22 million, according to the latest FEC filings as reported on CNN:

Roughly $400,000 related to a donor retreat at the President's Florida beach club. More than $37,500 in rent last month at a Trump-owned office tower in New York and another $3,400 in "legal and IT consulting" paid to the Trump Organization.

President Donald Trump's campaign and affiliated political committees have continued to drive hundreds of thousands of dollars to his companies in recent months, according to a CNN review of new filings with the Federal Election Commission. And more spending is on the way. On Monday night, Trump, for instance, headlined what the White House called a "roundtable" with donors at his Washington hotel, Trump International. The event raised $5 million for his reelection effort, a Republican official said.

In all, political committees have spent more than $22 million at Trump properties, since the billionaire real-estate developer entered the presidential race in 2015, a tally by the Center for Responsive Politics shows. Leading the way: His campaign; the Republican National Committee; Trump Victory, his joint fundraising operation with the RNC and state party committees; and a pro-Trump super PAC America First Action.

But for me, that's what gives the story its special poignancy.


RNC to Trump Gee Baby Ain't I Good to You https://t.co/0tcAtQczDS

Maybe we can arrange some Mandingo fighting for you, Andrew, so you can be sure your sports heroes don't dare to offend you by having any political opinions https://t.co/I1EveC1261

In fact (they explain at the link) Mandingo fighting, to the death, is fictional, for obvious reasons; the enslaved man was far too valuable, even compared to cockfighting. But simple competitions among the slaves, footraces and boxing matches, were common, and I'm sure National Review writers would enjoy seeing them revived.

Parents aren't paying for services. Except people like you who pay private tuition for special treatment for the kids (even after you abandon them).

Public education funding is society, including taxpayers with no school-age children, paying to make America a better place.

Whatever happened to him in his last unfortunate 20 years, he remains the man who called Mother Teresa "a lying, thieving Albanian dwarf" and "a fanatic, a fundamentalist, and a fraud" and I can't help loving him for that.