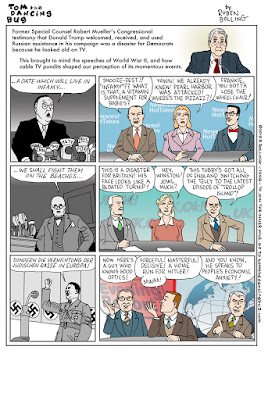 Really finding myself irked by this Democrats-in-disarray story I heard on NPR and apparently traces back to Politico, about the "moderate" freshman Democrats who unexpectedly jumped on the impeachment train in September when the Ukraine whistleblower story emerged and now want to control the narrative:

Rep. Elissa Slotkin of Michigan, one of more than three dozen Democratic candidates who flipped GOP-held seats in 2018, made clear Wednesday that she thinks Ukraine is where the impeachment probe should stay focused.

“I know that there's some people who are interested in kind of a kitchen sink approach — let's throw all kinds of things in there because we can and talk about all the things we're concerned about regarding the president,” she told reporters.

“We have been taking the country down this road on this very targeted issue of Ukraine and the issues around the president using his office for personal and political gain,” Slotkin added. “And that's what I think we should focus on.”

I don't know how many of these there are, but if they think the alternative is a "kitchen-sink" approach, they aren't paying attention. It's weird that Slotkin seems to have no idea what a broad category could be represented by "the president using his office for personal and political gain" in application to Trump—that would really be a kitchen sink, ranging from the foreign and domestic emoluments violations to having the White House Communications Director plug his and his daughter's tchotchkes on live TV, to say nothing of using Twitter to make the stock market jump up and down, from which somebody is surely making a profit.


The case as the House Judiciary staff is crafting it, in contrast, is really a kind of "seamless web" construct, where everything that's in grows organically out of the few words devoted to impeachment in the Constitution:


Our President holds the ultimate public trust. He is vested with powers so great that they frightened the Framers of our Constitution; in exchange, he swears an oath to faithfully execute the laws that hold those powers in check. This oath is no formality. The Framers foresaw that a faithless President could destroy their experiment in democracy...

In identifying “other high Crimes and Misdemeanors [than treason and bribery],” we are guided by the text and structure of the Constitution, the records of the Constitutional Convention and state ratifying debates, and the history of impeachment practice. These sources demonstrate that the Framers principally intended impeachment for three overlapping forms of Presidential wrongdoing: (1) abuse of power, (2) betrayal of the nation through foreign entanglements, and (3) corruption of office and elections. Any one of these violations of the public trust justifies impeachment; when combined in a single course of conduct, they state the strongest possible case for impeachment and removal from office.

That is, it's going to be a single case, with these three strands woven together, centered on the Ukraine matter, which is one set of foreign entanglements, but with another set, the Russia matter, in the background, which is inevitable because, as the Intelligence Committee report puts it,


we were struck by the fact that the President’s misconduct was not an isolated occurrence, nor was it the product of a naïve president.  Instead, the efforts to involve Ukraine in our 2020 presidential election were undertaken by a President who himself was elected in 2016 with the benefit of an unprecedented and sweeping campaign of election interference undertaken by Russia in his favor, and which the President welcomed and utilized.

Having witnessed the degree to which interference by a foreign power in 2016 harmed our democracy, President Trump cannot credibly claim ignorance to its pernicious effects.  Even more pointedly, the President’s July call with Ukrainian President Zelensky, in which he solicited an investigation to damage his most feared 2020 opponent, came the day after Special Counsel Robert Mueller testified to Congress about Russia’s efforts to damage his 2016 opponent and his urgent warning of the dangers of further foreign interference in the next election. With this backdrop, the solicitation of new foreign intervention was the act of a president unbound, not one chastened by experience.  It was the act of a president who viewed himself as unaccountable and determined to use his vast official powers to secure his reelection.

Obstruction of justice, likewise, comes in under abuse of power—


President Richard Nixon’s conduct has come to exemplify impeachable abuse of power: he acted with corrupt motives in obstructing justice and using official power to target his political opponents, and his decision to unlawfully defy subpoenas issued by the House impeachment inquiry was unconstitutional on its face.

—and clearly must touch both Russia and Ukraine and the whole sorry story of obstruction from the Flynn firing through the current fight of the Trump Justice Department to take the obviously valid congressional subpoenas all the way to the Supreme Court, including pardon dangles because, as Madison noted,


the President could be impeached for abuse of the pardon power if there are “grounds to believe” he has used it to “shelter” persons with whom he is connected “in any suspicious manner.” Such a pardon would technically be within the President’s authority under Article II of the Constitution, but it would rank as an impeachable abuse of power because it arose from the forbidden purpose of obstructing justice. To the Framers, it was dangerous for officials to exceed their constitutional power, or to transgress legal limits, but it was equally dangerous (perhaps more so) for officials to conceal corrupt or illegitimate objectives behind superficially valid acts.

Also struck me recently that there's a case where Trump's obstruction of justice succeeded: in the lying and balking of Flynn, Manafort, maybe Carter Page, Stone, Giuliani, Junior, and Trump himself (plus Prosecutor Lutsenko's assistance in Kostya Kilimnik's escape to Russia) which left Mueller unable to prove coordination between Russian intelligence agencies and the Trump campaign.

I'm starting to feel that the "narrow" case without any emoluments violations or personal corruption and financial crimes really could add up to the strongest possible case after all. It leaves out things that are very important to all of us (faithful execution failures in immigration matters and environmental regulation) as well as the very bad financial misconduct of which the investigation will carry on both in the House and in SDNY, but it may be broad enough. I'm even hoping that the charges relating to the faithful execution clause of the presidential oath will include not only Trump's unconscionable delay of military aid to Ukraine (something he has apparently been doing to Lebanon too) but also the stonewalling on Russia sanctions.

This isn't to say I'm optimistic about removing Trump through the impeachment process: that remains a ridiculously long shot, give the current state of the Republican party in general and the Senate Republicans in particular, where the corruption just gets more and more transparent every day. But I'm getting a sense that the effort can contribute strongly (over what's now the next 11 months) to the developing partisan case against Trump and the complaisant Republican party, in the creation of a working story to which people can attach their increasingly disturbed feelings. Thanks to the brave testimony in November of all those dedicated public servants who'd watched in astonishment as a vital foreign policy area was being snatched out of the hands of the State Department by a gang of clownish superannuated thugs, and took careful notes, no doubt; but also thanks to some really gifted writers on the Intelligence Committee and/or its staff who have understood the material they're working with and given it the kind of narratology I've been looking to see.

I'll be trying to write something about that before too long. In the meantime, you all could be making an effort to read at least the report's Executive Summary, and I hope Rep. Slotkin finds time to have a look at it too.