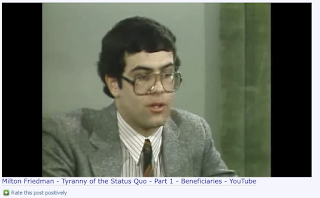 David Brooks reminiscing about his radical youth ("I Was Once a Socialist. Then I Saw How It Worked."):


I was a socialist in college. I read magazines like The Nation and old issues of The New Masses. I dreamed of being the next Clifford Odets, a lefty playwright who was always trying to raise proletarian class consciousness. If you go on YouTube and search “David Brooks Milton Friedman,” you can see a 22-year-old socialist me debating the great economist. I’m the one with the bushy hair and the giant 1980s glasses that were apparently on loan from the Palomar lunar observatory.

Actually there are persons with bushier hair, he's labeled not a socialist but one of the two "social democrats" in the politically diverse group which looks more like Professor Friedman's senior seminar than a debate, except for all the boys wearing suits, and he timidly suggests that government subsidies for education are a good thing because they will make students grateful and more interested than otherwise in doing good for society when they get rich, which is so exactly the future Brooks that it'll make you laugh out loud. Friedman quickly shuts him down by forcing him to agree that private institutions are better than public ones because they win more Nobel Prizes, which is not only a stupid argument but in fact false (the top 50 list is around half public institutions, including all the European ones of course, from #50 University of Washington, #47 City University of New York, #46 Copenhagen, #45 École Normale Supérieure, #44 Würzburg, #43 Goethe-Universität Frankfurt, #42 UCLA, and #41 Uppsala to #10 Sorbonne, #7 Oxford, #6 University of California at Berkeley, and #3 Cambridge), though Brooks still believes it today.

My socialist sympathies didn’t survive long once I became a journalist. I quickly noticed that the government officials I was covering were not capable of planning the society they hoped to create. It wasn’t because they were bad or stupid. The world is just too complicated.

In fact, as we know, while he was dreaming of being the next Clifford Odets he was also reading Edmund Burke's Reflections on the Late Revolution in France (critically, he assures us), sitting in on Allan Bloom's classes, and famously angling for the attention of William F. Buckley in hopes of an internship at the National Review and induction into his set in the Upper East Side (as in the story of how he decided to major in history: "I decided that if I liked Greenwich Village better, I was going to become an English major, because that was sort of artsy fartsy. I decided if I liked the Upper East Side better, I should do history since that was practical"), in which he succeeded.

I think the main thing he learned during his months as a police reporter for Chicago's City News Bureau (which is not what we usually mean by "covering government officials", but let that pass) was  that reporting was too hard and he'd rather just have opinions, but he has described it before now as a conversion to Burkeanism, caused by the encounter not with "government officials" but with public housing projects:


I covered crime. I was around the Cabrini Green and the Robert Taylor homes—the big projects. Here was a living example of people who thought they could do social planning or social engineering, and it failing. That led to obvious Burkean conclusions that organic society is too complicated to plan. A lot of that led me back to Burke.

Then instead of going to Lagos or Jakarta to enjoy a superior society where all decisions on housing are made by the uncontrolled market, he spent a few years in Brussels, where a lively and successful "social housing" program had existed since the 1920s—when he got there at the dawn of global Thatcherism, authorities were just starting to decentralize and defund it, leading to decades of no construction and a housing crisis that is just now beginning to be addressed with, naturally, really great government housing.

Email ThisBlogThis!Share to TwitterShare to FacebookShare to Pinterest
Posted by Yastreblyansky at 10:08 AM Labels: bad writing, David Brooks, socialism