The Problem with Paranoia

Silly dustups with people from our side spreading the claim that Trump stole $2.8 million from veterans' organizations, or, more realistically, raised the money for veterans' organizations and kept it for himself, which I agree would come to the same thing. Including the extremely estimable David Atkins, who put it in the Washington Monthly:


it should still leave us speechless that only a few days ago the President of the United States was held liable by judge of defrauding veterans to the tune of millions of dollars via a fake charity he used for vainglorious personal and campaign expenses....

Only that's just not what happened.

that's not quite what he did. His campaign gave vet orgs money that he claimed was from the Foundation. https://t.co/ctXg5JMmFF the portrait and other stuff were funded by Other People's Money, but not vets'.
— Yastreblyansky (@Yastreblyansky) November 11, 2019

It was money that he raised ostensibly for vets, but didn't use for them.
— David Atkins (@DavidOAtkins) November 11, 2019

That he didn't. He used plenty of Foundation money on personal profligacy but not that. It's not what he was busted for, and it's not what the source for your Washington Monthly piece says.
— Yastreblyansky (@Yastreblyansky) November 11, 2019


Trump's specific crime or rather offense in the rally of 28 January 2016 (which he staged, you'll recall, to compete for eyeballs with a Republican debate he was afraid to participate in), was to involve his "charity" in a political campaign, which is against the law in New York State, having the whole thing entirely run and organized by his then campaign manager Corey Lewandowski, and the Foundation serving only as checkbook, checkbook being basically all it was in the first place. But the money raised did, after mostly being deposited in the Foundation accounts, wind up over the next few weeks in the accounts of those those veterans' associations, such as they were. The following, from the evidence brought to the case, lists the recipients of the $2.76 million that had been distributed (by Lewandowski, though not by the imaginary staff of the "charity", since the charity didn't have a staff: 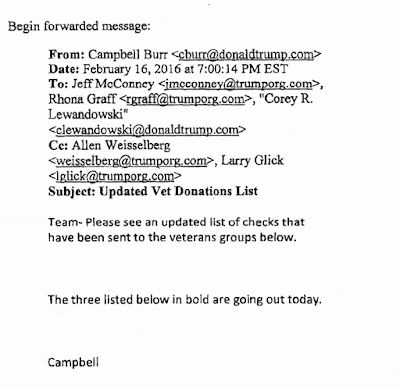 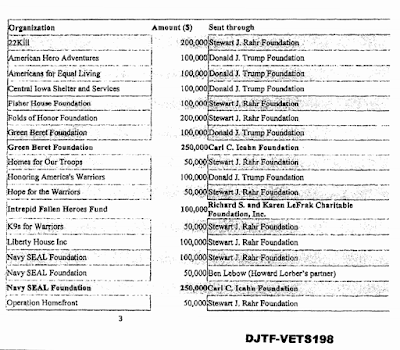 And the following, from Judge Scarpulla's opinion issued last week, clarifies why she rejected the AG's call for Trump to make restitution of the money raised on the occasion, because it had, in the event, gone to the intended recipients after being laundered through the Foundation:
I don't know what else to say about this. I'm not saying the Trump Foundation was a good thing; it was not. Judge Scarpulla still thought it needed to pay a pretty serious fine and then disappear, and she mentioned a bunch of other things that it notoriously did wrong, though she wouldn't put it as harshly as I might. It wasn't nearly as bad a crime, to be honest, as the Trump University scam that stripped poor people of their savings for an education that it couldn't begin to offer—a multilevel marketing scam in which the purpose of the professors was to sell more expensive classes—for which Trump was fined $25 million shortly after the election. But it did not do that one specific thing that it's being accused of in the Twitterverse.

Does it make a difference? Does it make a difference that the "transcript" of the 25 July call between Trump and Zelenskyy really is more a transcript than it is anything else, and a pretty good one except for the couple of spots where it appears to have been manipulated? Does it matter that the downfall of the Bolivian government still doesn't seem to be a coup d'état by any conventional definition?

I think it does. I think there needs to be a big and categorical difference in the way we, in the reality-based community, do our work as opposed to the other guys, pushing false stories, like the current effort to suggest the Mueller investigation had no grounds to work on and Joe Biden was encouraging Ukrainian corruption when he was doing the opposite.

I'm thinking among other things about the fostering of paranoia, and cynicism to follow, when you get people believing in things that don't exist: the "true" transcript of the Zelenskyy phone call, the disappearance of the money raised in that Iowa rally. It leads people to believe in occult forces that can never be caught, deep states and Illuminati fraternities, and their own powerlessness.

When people began to believe that Clinton had rigged the 2016 primary, or that she'd sold herself to bankers for speaking fees, or that she and Podesta were running a child sex ring in the basement of a pizzeria that didn't have a basement, they didn't rise in the revolution that Bernie Sanders had hoped to see; they gave up. Voted for the meaningless Stein or the bad joke Trump or didn't vote at all.

A really interesting thing about the ongoing ferment in Latin America came up on NPR this morning, from the former Mexican foreign minister Jorge Castaneda:

CASTANEDA: ...Whoever the bums may be. Some of them may be on the left, like Evo Morales. To a large extent in Venezuela, people are - have been demonstrating for two years now to get rid of Nicolas Maduro. Sometimes they can be on the right. Throw the bums out in Mexico, which they did electing Lopez Obrador last year or now electing Alberto Fernandez in Argentina and throwing the pro-business mockery out. There is this anti-incumbency throw whoever is in power out because we're not happy. We're frustrated. We're resentful. Why? Well, partly because the success of many of these governments of the left over the last 20 years in Latin America - left and center - have created a much larger middle class...

CASTANEDA: ...Which has achieved a certain consumer status. They can - they have a car. They have a home. They have cellphones. They have refrigerators, kitchen, the works - what the American middle class obtained in the 1950s. But they don't have the public services that they believe must accompany this moving into the middle class. They have terrible health care, terrible pensions, low wages, terrible or very expensive higher education. So then you see people marching in the streets in Chile over a tiny increase in transport and subway fare.

What's animating the movements agitating Latin America at the moment isn't to be described on an axis of left-to-right, though we can say if we want that the failures of the existing government are from the right whether the people or the rulers know it or not, in those four or five central aspects of health care, retirement security, wages, education, and public transportation, and a recognition that the authorities, left or right, haven't been honest. And they're revolting because, unlike a decade or two ago, they're not afraid; they believe they have power.

False stories, fake news, encourage paranoia, and paranoia encourages paralysis. The information chaos of 2016 brought people to a kind of helplessness in which the only protest they could manage was a joke. A certain level of comfort encourages a sense of power, but the most important thing may be a sense of realism, and the recognition that we in the lower orders do have some power after all,  and start imagining that we might be able to use it. It's better to make the effort to tell the truth.