A Yarn Ball as Big as China


So I was having the craziest dream, all bound up, naturally, with the impeachment inquiries, and the House Intelligence Committee attempt to get witnesses and Trump and Barr trying to make then all refuse, and there were these two respectively Ukrainian- and Belarus-born Florida business guys, Lev Parnas and Igor Fruman, who had worked in some capacity for the president's personal lawyer, Rudolph Giuliani, in the Ukraine matter, refusing to testify or provide documents, only they did it by mail, in the form of a letter from their lawyer, John Dowd, who used to be Trump's personal lawyer, only the letter was in Comic Sans

and claimed that they were also Giuliani's clients, while moreover they were also doing legal work for the Ukrainian oligarch Dmytro Firtash's American counsel Victoria Toensing and Joseph DiGenova, who were said in some accounts to be working "off the books" with Giuliani for the president in Ukraine digging up that Biden dirt, but then it turned out the real reason they couldn't testify to the Intelligence Committee on Thursday and Friday was that they had one-way tickets to Vienna, where Firtash lives, and were under arrest by the US Attorney for New York's Southern District (who have also opened an investigation of Giuliani) for conspiring "to circumvent the federal laws against foreign influence by engaging in a scheme to funnel foreign money to candidates for federal and State office so that the defendants could buy potential influence with candidates, campaigns, and the candidates' governments" including the America First PAC ($325,000) and former representative Pete Sessions, who was apparently getting paid for demanding the firing of the US ambassador to Ukraine, Marie Yovanovitch, who did subsequently get fired and was set to testify to the Intelligence Committee herself on Friday.

And then I woke up and it was all apparently true, more or less.

And they looked like 30-years-older versions of the villains in Home Alone, did I mention that? And before they were prevented from fleeing to Vienna by getting busted and sent to jail in New York instead they'd had lunch with Giuliani at Trump's Washington hotel.

Or, as BooMan said,


I feel like I’m drinking out of a firehose. How could I possibly take in all this incriminating information that is spilling out everywhere and quickly do it justice in a blog post?

My god! This is the most extraordinary thing I’ve ever seen in all my years of watching American politics. I don’t have the foggiest idea where to start. I know I am watching a thread unravel here but I think the hidden ball of yarn must be the size of China.

Giuliani is the single biggest moron I have ever seen in public life. He makes Trump look like a certified genius by comparison.

Or what it looks like at the moment is that Giuliani and EU ambassador Gordon Sondland and their unsavory confederates have taken charge of Trump's Ukraine policy outside of the State Department and are running it for their own peculiar purposes, in Parnas's and Fruman's and probably Giuliani's cases to further their own business interests, and in Giuliani's to promulgate his batty ideas about the innocence of Paul Manafort, George Papadopoulos, and the Russian government, and on Trump's behalf to find ways of casting suspicion on former vice president Joe Biden, which is why they wanted to fire Ambassador Yovanovitch, who was standing in their way, and paying American politicians with foreign money to help them achieve these objectives. A crime syndicate with a political sideline.

And one that may well be similar in size to China, because it smells the same as Trump's relations with all sorts of important foreign countries, especially Russia, Saudi Arabia, United Arab Emirates, Qatar, and China itself. Now that we have proof adding up for the one country, allegations on the subject of the other countries are starting to look increasingly realistic.

And then Ambassador Yovanovitch did testify, yesterday, and it looks like Ambassador Sondland will, too, in defiance of State Department orders, on Thursday, suggesting to me that he has a pretty good idea of what kind of trouble he's in, as we already supposed from his anxiety in the WhatsApp texts 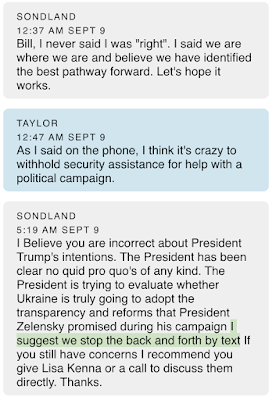 and would possibly like to give the Schiff committee some reasons for recommending leniency on his case to a judge some day soon. And Fiona Hill, who was until August the Russia advisor on the National Security Council, will testify on the "shadow policy" of Giuliani and Sondland next week as well.

My narratological sense is too assaulted to be functioning well, to the point where I seriously haven't known what to write for a couple of days, but it's starting to feel like a break in the case, where witnesses are starting to recognize their situation and deciding it's safer to bet on the side of truth, and so much information is starting to come out that we can't keep up. And public support for impeachment has risen to really remarkable levels, well ahead of where they were in 1974, even among Republicans; it's the turnaround of independents that's the most startling, though:


It's still very hard to imagine Republican senators voting to convict—it's still very few Republican voters that favor even the impeachment inquiry, and 20 Republican senators is an awful lot—but then, in one of the most incompetent political moves ever, Trump pulled his trick of an improvised greenlighting of Turkey's invasion of Syrian territory held by Kurds, there are already 100,000 refugees on the move, flooding Iraq if they have connections there but otherwise in a bad situation; civilians starting to get killed, including children, and horrible pictures; US troops coming under Turkish fire! It looks as if Trump started a war by accident and is rapidly losing it.

Watch for the Murdoch interests, Fox and the New York Post, getting more and more indignant on the treatment of Kurds and calling for action against Turkey to match agita on the part of congressional Republicans. If Trump ignores it and it gets to a certain point (there's a strong, though I'm pretty sure incorrect, belief among evangelicals that there's a significant number of Christian Kurds, which is helping to drive the feelings) Graham, Collins, and a number of others in shaky-looking states like Colorado, North Carolina, and Texas, are going to start thinking they might have a license to get mad at Trump, and it could start a stampede.