David Brooks ("The Abortion Memo") turns his column over to somebody called "Imaginary Democratic Consultant", who can't understand why so few Democratic Senators voted for a blanket federal ban on terminating a pregnancy after it's been going on for 20 weeks, so that the bill ended up filibustered to death:


Last week I watched as our senators voted down the Republican bill that would have banned abortions after 20 weeks. Our people hung together. Only three Democrats voted with the other side. Yet as I was watching I kept wondering: How much is our position on late-term abortions hurting us? How many progressive priorities are we giving up just so we can have our way on this one?

And two Republicans, Collins and Murkowski, voted with our side. How much is it hurting them? But do tell, Mr. Imaginary. How many progressive priorities is it?

It's true, Republicans are ready to pass immigrant amnesty, socialized medicine, supertrains in all 50 states, and reparations for slavery if only we give up this crazy insistence on civil rights for women. What's wrong with Democrats? https://t.co/fdwSFTgaPE
— Yask Not What Your Country Can Do For You (@Yastreblyansky) February 2, 2018

No, that's not what Mr. Imaginary means. He's talking about elections: he's claiming there are millions of voters who would vote Blue in a fetal heartbeat if they had anti-abortion Democrats to vote for, because in 1971 Teddy Kennedy was a pro-lifer. Plus Millennials:


We also shouldn’t take millennial voters for granted. Boomers saw the pro-choice movement as integral to their feminism. Millennials do not. In 1991, 36 percent of young voters thought abortion should be legal in all circumstances; now only 24 percent do. Young voters don’t like the Republican total ban. But they don’t like our position, either. Moreover, young pro-choice voters are much more ambivalent or apathetic than young pro-life ones.

I can't be arsed to search for an actual poll he's referring to, because on Wednesday Wapo ran a piece precisely on Millennial attitudes toward abortion, quoting a Quinnipiac poll (from January 2017) that very specifically does not say that; it says 35% of young voters support legal abortion in all cases, statistically indistinguishable from 1991:

Funnily enough, that Wapo story also has an appalling number that feeds right into Brooks's argument, but he doesn't know about it: 49% of 18-to-34-year-olds say if their state were to pass a law banning all abortions after 20 weeks, they'd support it, and 46% of the overall population. They weren't asked if they'd support a federal ban, but I imagine the Senate Republicans were very aware of that statistic when they proposed one, and Imaginary Democratic Consultant telling Democrats they should have voted for it too should have known about it as well.

My sense is that (1) it's not an issue the respondents are thinking about very much (they say they'd support this ban even though they're overwhelmingly in favor of Roe v. Wade), and  (2) an awful lot of people don't understand what a late-term abortion is, or why such a thing would take place, including, of course, David Brooks Mr. Imaginary:

They're only around 1% of all abortions in the US, and most of them are for women who didn't realize until four or five months in that they were pregnant (or in denial about it, because the prospect was so terrifying), who don't feel they can face the changes bringing the pregnancy to term would make in their lives, in the short time left to them to prepare (even if they want to relinquish their baby for adoption, which is actually more likely to be emotionally damaging than an abortion is), and who are afraid in many cases to tell abusive parents or partners, and if you're mean-spirited enough you can say they deserve to be forced to give birth because they should have known better, but a number are going to be women whose fetus has an abnormality that can't be detected until late in the pregnancy:


As Dr. [Jamila] Perritt explains, “The ultrasound that the majority of women get 18 to 20 weeks into their pregnancy is one that looks at structural abnormalities — structures with the heart, or with any internal organs. Sometimes, these abnormalities can be diagnosed early, but other times it’s not until the 20-week mark that we detect them.” It’s worth noting that these are often wanted pregnancies with unfortunate outcomes — a fact some Republicans dismiss in favor of the more damning narrative that women who seek abortion later in pregnancy are simply irresponsible.

Obstetrician Cheryl Axelrod, writing for Vox, tells the story of undergoing a second-trimester abortion herself—


“Your son won’t make it past delivery.” I heard those heart-rending words from my doctor 13 weeks into pregnancy with my first child, and I will never forget the moment. My unborn son, he told me, had developed cystic kidneys, causing low amniotic fluid which in turn would inhibit lung development. He would suffocate upon delivery, if he even made it that far. Faced with this grim prognosis, my husband and I did what we knew was best for our son. We ended the pregnancy during my second trimester, at 13 weeks.

and those of patients who did it in the third trimester:

a pregnant woman who found out at her 20-weeks scan that her baby had a complex heart defect and was missing half of its brain tissue. Her daughter wouldn’t survive after birth — we ended the pregnancy by induction a few days later. She was 30 years old with two beautiful girls at home; the family had been so excited about this third baby.

Another woman I treated was pregnant with twins. She had cervical insufficiency. At 21 weeks, her body couldn’t hold the pregnancy inside any longer, and her first baby was slowly delivering at a highly premature age. Neither of the twin fetuses would make it to viability, and the risk of serious infections was very high if she waited to deliver the second fetus. After discussion and prayer, she decided to terminate the pregnancy.

The bill the Senate was voting on, the "Pain-Capable Unborn Child Protection Act" (I can't type that without scare quotes), did not allow abortion for this kind of case, though it did make the usual rape and incest exceptions (which make it clear, as ever, that the law aims not at "protecting life" but at punishing women: you can have an abortion if you can prove you didn't want to have sex, but if you enjoyed it, too bad, sister; or perhaps the unborn offspring of rapists aren't capable of pain?), and one


to save the life of a pregnant woman whose life is endangered by a physical disorder, physical illness, or physical injury, including a life-endangering physical condition caused by or arising from the pregnancy itself, but not including psychological or emotional conditions.

Because if pregnancy is making you suicidal, motherhood is just what you need (ignoring that most abortions are for women who already have children, who won't exactly be helped by having a suicidal or dead mother).

My sense, anyhow, is that Brooks has been spending too much time in 1971 himself; I really doubt that opposition to abortion among potential voters is a significant problem for Democrats this year. Abortion is even less partisan than it used to be; "moderate" Republicans favor more liberal abortion laws almost as much as independents do, according to this early 2017 Pew poll, while sizable minorities of moderate Democrats favor more restrictive abortion laws but vote Democratic anyway. 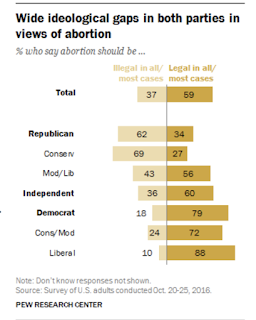 And I can't find any polling data that even tracks abortion as a 2018 issue at all, for instance among 19 factors measured in this newish Pew study. Even Fox News, reacting to the victory last November of strongly pro-choice Doug Jones over anti-abortion fanatic Roy Moore in Alabama of all places, is advising Republicans that it's a secondary issue at best and not one on which any voters like absolutist positions one way or the other.


Let’s try to imagine what would happen if Roe v. Wade was overturned. The abortion issue would go back to the states. The Center for Reproductive Rights estimates that roughly 21 states would outlaw abortion. Abortion would remain legal in probably 20 others. There’s a good chance that a lot of states would hammer out the sort of compromise the European nations have — legal in the first months, difficult after that. That’s what most Americans support.

And that would be undesirable but nonetheless a much better outcome from the Democratic standpoint than the "Pain-Capable Unborn Child Protection Act" Mr. Imaginary is asking us to approve, which would rule those compromises out in all 50 states. I'm afraid that Mr. Imaginary is nothing but a common concern troll!


I shouldn't sign off on this without praising David Brooks for something he did on Tuesday ("The East Germans of the 21st Century"), credit where credit is due, not just for scolding Republicans on their anti-immigrant nativism, which isn't unusual for him, in spite of his affection for little homogeneous villages where they don't need government; and not just for subtweeting Monsignor Ross Douthat, the Apostolic Nuncio to 42nd Street, who had been arguing ("The Necessity of Stephen Miller") that President Trump literally needed a white nationalist at the table when he was working out an immigration deal with Senator Schumer (after Schumer convinced Trump that Miller shouldn't be in the room), because white nationalists need to be represented too.

No, the thing that struck me was that he seems to have noticed that something was reading conflicted with his beliefs and tried to find out why, going so far as to call or email the sociologist Robert Putnam:


What about the rise of social distrust? Restrictionists often cite a 2007 Robert Putnam study finding that more diversity leads to less trust. But Putnam tells me they are distorting his research. He found that diversity’s benefits outweigh its disadvantages, that trust declines over the short term as places grow more diverse, but that over the long term Americans find new ways to boost social solidarity.

Of course he's only citing it because Putnam confirmed that his belief was correct, but if he keeps going on like this he's going to end up noticing that there's more social trust in his own diverse and unchurched Capitol Hill neighborhood than there is among the hierarchy-haunted Trump voters of Armpit, PA.

As a matter of fact, East Germans (raised by Brooks as an example of people who insisted on sticking with a bad system for decades after it was clear that it wasn't working, although I can assure him that most East Germans had no choice in the question of whether they should be a communist country or not) are the East Germans of the 21st century, with the fewest immigrants, and the most hostility to immigration, anywhere in the Federal Republic, as you can see by this pair of maps: 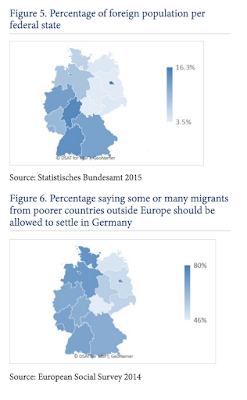 More on the abortion column from The Rude One, who was angry enough to write a complete word-by-word parody.