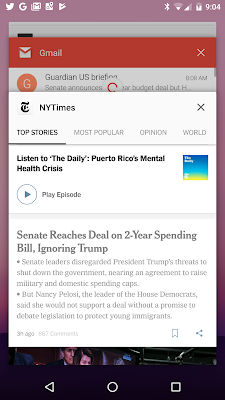 Sometime early Thursday morning, I think, the phrase "ignoring Trump", captured on the screenshot from my phone, disappeared from the New York Times teaser headline in the computer version, although "disregarded President Trump's threats" remained in the body copy: 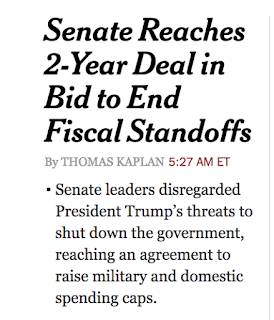 Then again, Trump had moved in Wednesday afternoon to claim implicit credit for the coming resolution:


The Budget Agreement today is so important for our great Military. It ends the dangerous sequester and gives Secretary Mattis what he needs to keep America Great. Republicans and Democrats must support our troops and support this Bill!
— Donald J. Trump (@realDonaldTrump) February 7, 2018

Keep America Great! The way the narrative seems to be developing is something like the way I thought it would have to be, in the age of Emperor Trump: the legislature needs to stop worrying about the White House as a participant in the negotiations and get its work done without him. When they've got a product there's bound to be a way to sell it to him as his own victory, even as the White House's top priorities (and Republican priorities of the whole Obama era) are necessarily discarded:


The budget agreement, coming a day after President Trump threatened to shut down the government, would effectively negate Mr. Trump’s demands to broadly reorder government with deep cuts to nondefense programs like environmental protection, foreign aid and health research that were to offset large increases in military spending. Mr. Trump is to release his second budget request on Monday, but the deal — championed by the top congressional leaders from his own party — amounts to an unequivocal rebuke of many of the budgetary demands he has put forth.

The deal would give Mr. Trump military bragging rights. “The bottom line is that, thanks to President Trump, we can now have the strongest military we have ever had,” the White House press secretary, Sarah Huckabee Sanders, said on Wednesday.

See what I mean?

Does this mean that I think the Senate deal is a good deal? What about heroic Nancy Pelosi and her eight hours on the House floor yesterday, pleading the cause of the Dreamers in their own words? Is she just wasting her time?

In a word, no, I don't think she's wasting her time at all. I'm not sure how I feel about the Senate deal, it smells a little bit like a conspiracy to weaponize the deficit against a future Democratic majority, between the tax cuts which were already going to add more than a trillion dollars and the $300 billion in new spending, by now means all of it for the military, being tacked on to that, but I don't see where it was likely to be better; the $90 billion for hurricane and wildfire relief could hardly be skipped.

As to DACA, I have a slightly complicated thought, which was that Pelosi and the presidential-candidate Senators, Gillibrand and Booker and Warren and so on, were right to vote against the budget deal if there was no adequate promise of Dreamer legislation, and the other Senators, Schumer and Menendez and Markey etc., were right to vote for it. Both sides were doing what they needed to do for themselves and for the country as a whole,  and they were voting as a group.

Here's what I mean. There was that piece by Mark Tushnet on "Constitutional Hardball" at Balkinization that Thornton linked the other day, asking what should Democrats do in their current state of institutional weakness? Should they be appropriate, dull and responsible, fulfilling their governmental obligations if if it means looking nerdy while Republicans may get the credit for it, in the hope that just modeling appropriate behavior will eventually remind voters of what they want government to do? Or should they be angry and disruptive, deploy the weapons of the weak, snark and blackmail, and make the Republicans' lives harder at the risk of looking immature, in the hope that some guerilla theater and noise will remind voters that what Democrats want is what they mostly want themselves?

And it seems to me (as it didn't, I think, to Tushnet) that the answer is clearly yes—both!

Our proper Democrats in this round have kept the government running in spite of assaults by Donald Trump and Rand Paul trying their best to create a shutdown, and even gained a bit of advantage in the social spending line, and our disruptive Democrats have kept the immigration agenda alive, and even kicked it forward a little—I was amazed that Paul Ryan could have been drawn to make any promise to allow a vote on the issue, after Pelosi asked him to "man up". All the House Democrats got to vote the way they really wanted to (62% against) and a bunch of Republicans were forced to make a vote they didn't like (just 29% against, which should have been closer to 40%).


Leading up to the vote, House Minority Leader Nancy Pelosi urged her members to vote against the bill but also urged them to hold their votes back, forcing Republicans to show their strength.

She was calculating whether it was safe for all the Democrats who wanted to vote no to do so, but it turned out to be just fine, and all the points got made. We might even see that Dreamer bill.

Keep America Great! Don't everybody do the same thing!