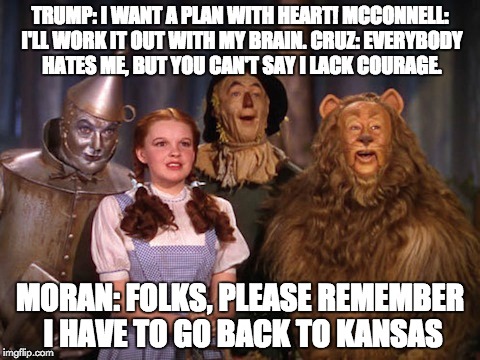 Trump really said that in June, "I'm talking about a plan with heart!"

So I was working on my weekly listen-folks-they-can't-pass-that-GOP-health-bill post when things got noisy around the old demesne and the TV went on and what do you know? I'm too late! Senators Jerry Moran (Wet-KS) and Mike Lee (Stegosaur-UT) announced that they're not voting for the bill, effectively taking it off the able and throwing it onto the compost heap, and we're now starting all over.

I've long thought this was bound to happen sooner or later, because voters all over the country are starting to realize what the Republicans have been trying to do to them, especially over the Medicaid, but McCain's health emergency seems to me to have been the immediate as opposed to proximate cause. His recovery from inside-the-skull surgery was going to delay the vote by a couple of weeks at least, likely more, which was going to allow the public to spend more time digesting the bill.

Meanwhile, the Congressional Budget Office delayed its report on the bill, which was supposed to be out on Monday, meaning they would be have time to score the unspeakable Cruz-Lee  "Consumer Freedom Option", a double-whammy device to destroy the individual health insurance market in the United States, for reasons best known to Senators Cruz and Lee (they must think health insurance is immoral because it involves sharing), by dividing it into two tiers, a low-premium one that will never pay a claim for healthy people and an astronomical-premium one for those who are already sick (like Senator McCain, though of course he's old enough for Medicare if he retires and has enough money to buy a fabulous Advantage supplemental), so that only the very rich will be able to buy it at all until it dies of those death spirals we keep hearing about.

The insurance industry itself came out with furious denunciations of the idea already, and the CBO reaction was going to be devastating. Lee himself must have known his amendment would be withdrawn (it was bracketed in the bill text, meaning it would be the subject of a separate vote) and he and Cruz would be undergoing a humiliating defeat before being pressured to vote for a bill they'd sworn never to vote for (they deny, with some justice, that it repeals Obamacare at all, though the other side of that is that it does make Obamacare unworkable, which ought to satisfy them).

I sincerely wish Senator McCain well and hope to see him back at work in weeks rather than months, but I can't shake the feeling that there's something providential in the way he's been taken temporarily out of commission.

I'm thinking about Edward M. Kennedy, the Lion of the Senate, in 2009 battling incurable brain cancer and fighting almost literally to the last to see the very partial fulfillment of his long dream of universal health insurance for Americans, taking the plan he did so much to help Massachusetts state legislators to produce against Mitt Romney's wishes and helping to craft a national version, which finally made it out of committee about a month before he died. The way the collapse of the most serious threat to the ACA flows out of McCain's treatable brain condition is completely symmetrical with the Act's victory eight years ago, in one of those cases of history not repeating itself but rhyming.

The story isn't over yet, of course. The Emperor has issued his Twitter-ukaz

Republicans should just REPEAL failing ObamaCare now & work on a new Healthcare Plan that will start from a clean slate. Dems will join in!
— Donald J. Trump (@realDonaldTrump) July 18, 2017


and McConnell has agreed to put that to a vote, although even the failing New York Times can't see a way that could pass, for good reason. There's already a CBO score for this bill, which Congress passed in 2015 and Obama vetoed, and it makes the Senate Better Care Reconciliation Act look benign by comparison. Andrew Prokop summarized it for Vox last January:


The report estimates what would likely happen if the partial repeal bill Republicans passed in 2015, but which was vetoed by President Barack Obama, actually became law without any replacement.
Its findings aren’t pretty. CBO estimates that, compared to what’s already projected to happen under current law:


If there's anybody out there who thinks a Republican Congress would be able to construct a replacement to forestall these dire effects (in a measure affecting one sixth of the economy, as they always remind us) in the course of less than two years, I've got a sequester plan to sell them.

So they'll have to end up where McConnell himself predicted they would, as I was saying last week, with a Gang of 8 bipartisan type of effort to fix up the ACA in time for the next Open Enrollment season. It won't be pretty, but it will be sort of OK.

PLEASE DON'T BELIEVE ME! KEEP CALLING YOUR SENATORS AND FLOCKING TO THOSE TOWN HALLS AND DEMONSTRATING! A HUGE REASON WHY THIS IS WORKING OUT IS THE FACT THAT THE PUBLIC IS ENGAGED!

They're Republicans, and the fact that a plan is crazy and cruel isn't by itself enough to stop them.

Update: The repeal for repeal's sake proposal has already sunk under rejection by Collins, Capito, and Murkowski. That was easy!