Scaramouche the Douche. I

Full transparency: I'm going to turn myself into cellophane, so you can look through me and see the real whatever there is back there. https://t.co/dcYTklWJuf
— Yastreblyansky (@Yastreblyansky) July 23, 2017

So this is about the Twitter evidence that Trump's new communications director, Anthony Scaramucci, used to hold some un-Trumpish views, like favoring marriage equality or opposing global warming, or thinking Trump lacks judgment, and

Where he showed the same peculiar misunderstanding as Fox's Monica Crowley, of thinking the Mauer was somehow analogous to Trump's wall, as if the East Germans had built it to keep out job-stealing West Berliner migrants. Walls do work if the object is to keep people in, see under "Prison", and he's even wronger than Crowley, in that the Berlin one worked pretty effectively, for 28 years.

I'd like to say, on the other hand, people are really being unfair to Scaramucci with all this accusing him of having "beliefs". They should be considered more along the lines of fashion accessories.


Maybe you were wearing one of those little fedoras last summer, but that doesn't mean you have to be wearing one every summer of your life from here on out. Similarly if Scaramucci thought concern about climate change flattered his figure at cocktails and charity events one season (like Ivanka Trump), don't think he doesn't have anything else to wear.

Thus you need to consider the context of how he told Obama he wanted to break up (whom he's said to have gotten to know decades ago, at Harvard Law, in the pickup basketball context), September 2 2010, at CNBC's Town Hall Meeting "Investing in America":


Listen, I represent the Wall Street Community. We have felt like a piñata. Maybe you don't feel like you're whacking us with a stick, but we certainly feel like we've been whacked with a stick. 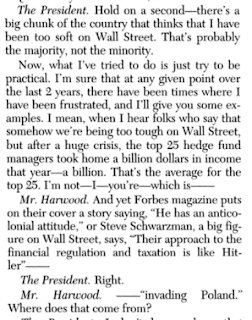 Where it comes from is, of course, Obama's mild suggestion that it might be a good idea to repeal the so-called "carried-interest loophole", which allows certain people like hedge fund managers, such as Anthony Scaramucci, to pay a 15% tax rate on their earned income, just like capital gains, instead of the 38% marginal rate others were paying. That was like Hitler invading Poland, or Obama hanging Anthony Scaramucci from the ceiling and having the kids at the party beat him until all of his innards came tumbling out.

And then after he made the piñata analogy Jon Stewart made fun of him in public, tragically forcing him to respond in the Huffington Post:


What if [Obama] is a socialist? What if he is going to tax me or over regulate me into a state of poverty? How can I, as a business person, really know what all of the costs are to hire more people and grow? This uncertainty is aiding and abetting the new normal of stagnant to little private sector job creation

Or maybe his feelings were hurt like those of a fox, if you know what I mean:


When Jon Stewart lampooned him as a “Jersey Shore breakout star,” after he complained to President Obama on TV that Wall Street felt like a piñata, Scaramucci was nothing short of delighted. For him, there are advantages to being visible. Hedge funds are traditionally the province of the superrich, but Scaramucci aims to make SkyBridge—a “fund of funds” that creates portfolios of hedge-fund investments—the first company of its kind to target “the mass affluent.” That is, investors who have the $200,000 annual income or $1 million in net worth the SEC requires of “accredited investors” but aren’t connected enough to get in with a Daniel Loeb or a John Paulson.

Anyway, back before Scaramucci became a Trumpist himself, when he was referring to Trumpism as "unbridled demagoguery" that would lead the Republican Party "either devastating defeat in the general election or a new, unrecognizable identity... caused by the reckless behavior of a man who knows a thing or two about bankruptcy," Trump was getting cheers from his rally audiences by wielding a piñata stick of his own,

"The hedge fund guys didn't build this country. These are guys that shift paper around and they get lucky," Trump said.

"They are energetic. They are very smart. But a lot of them - they are paper-pushers. They make a fortune. They pay no tax. It's ridiculous, ok?"

And the news outlets kept talking about Trump's "populist" attacks on the hedge fund guys, though it should have been clear that he had no intention of carrying out his threats (if only by elementary Trump logic we should all know that by now, since he apparently still hasn't sold his own holdings in three John Paulson hedge funds), and it certainly was clear to Matt O'Brien in the Washington Post, for instance, as early as October 2015: Trump's tax proposal


wouldn't raise taxes on any rich people, not even the hedge fund managers Trump said should pay more. That's because Trump would "stop" hedge fund managers from using a loophole that, for the most part, they don't use at the same time that he would slash the rest of their taxes.

Since the carried interest loophole applies only to assets that have been held for at least a year, and hedge fund managers rarely hold anything that long. Meanwhile, the plan

It took Hillary Clinton until June 2016 to incorporate this into her own anti-Trump speech. ("I did have to look twice because I didn’t believe it. Under Donald Trump’s plan, these Wall Street millionaires will pay a lower tax rate than many working people," she said, accurately.)

Scaramucci, whose first tentative contribution to the Trump campaign was in March 2016, must have figured it out by then—understood that Trump speaks loudly but the piñata stick is all for show—and he's never looked back since. Because he does have that one sincere and deep-seated, almost religious belief after all, that Anthony Scaramucci's money is sacred.

Which may make you wonder why he'd want to take a government job, of all things. I may come up with some thoughts on that score in a subsequent post.