So I'm deeply concerned about how the college-educated class has arranged things so that their children retain their privileged status right from infancy, where their women have jobs that make it easier for them to breastfeed their babies.

Hahaha no I'm not, but (paragraph 6) Richard Reeves is, as his recent book Dream Hoarders explains: structural factors beginning with the municipal zoning that keeps the well-off segregated in the pleasant parts of Portland and San Francisco where the good schools and jobs are, and college admissions criteria that favor their kids.

I was braced by his book, but after calling him up I decided he is wrong. There is no reason to tear down the structural barriers that prevent the disadvantaged from moving up. Much more important is the rarefied information barrier, in which people of less education are unable to participate in the lives of the privileged because they lack the vocabulary, as I learned when I insensitively invited an ill-educated friend to lunch at a deli where the menu used ingredients like soppressata, capicolla, and a striata baguette instead of going for Mexican.

The same problem exists for everything from stroller choices through exercise techniques to gender norms. Special cultural codes make the less educated feel unwelcome, as we learn from the thorough book The Sum of Small Things: A Theory of the Aspirational Class by Elizabeth Curridd-Halkett. It's not the prices that keep them from shopping at Whole Foods, it's the rarefied information they find there, with which they are unable to cope.

In conclusion, I would like to say that this is very upsetting.

Because there's obviously nothing that can be done about it. He has cleverly whisked the tablecloth of a soluble problem out from under the cutlery and replaced it with an insoluble one. Because while you could easily eliminate the structural barriers to class mobility, in theory, with affordable housing programs, affirmative action, massive redistribution of wealth, and the like, how can you get rid of wealthy people's need to wheel their babies around in McLaren strollers and drink their coffee from an avocado shell? Or whatever it is this month?

He really says that about Whole Foods:


It’s not really the prices that ensure 80 percent of your co-shoppers at Whole Foods are, comfortingly, also college grads; it’s the cultural codes.

That may be true (the source is something John Mackey told Reason magazine in 2009, but he cribbed it from the Currid-Halkett book), but people with BAs (per InfoScout) are no more likely to go shopping there than anywhere else, and people with incomes over $100K and people with advanced degrees (i.e., professionals) are. Those over $125K much more so: 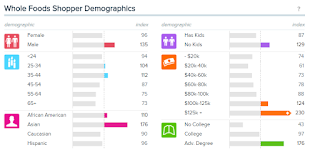 He also really says he was "braced" by the news of the structural barriers to class mobility in the US:

That's a little bit of a post-Freudian slip like Trump's in the Tweet where he said he and Putin were going to "guard election hacking".

The general idea seems to be that "we" could solve the inequality problem by being more attentive to those who are less equal—"Let's eat Mexican" or "You wouldn't be comfortable at Harvard anyway"—by making them not feel bad about it. I.e., by not solving it. But are "we" hopeful hipsters (at the cheaper Trader Joe's, not the dreary Whole Foods, saving money is cool where I live) really "ruining America" with "our" striata baguettes (not that I believe for a second such a thing exists, it doesn't make any sense to create a loaf that is both stretched flat and rolled long at the same time)? Or are you and your multimillionaire friends doing it by hoarding all the capital? It's just such a mystery!

Update: There's a rare and beautiful excursion into Brooksology by the vacuumslayer. And Roy shows up as well. What a swell party this is shaping up to be! Hi, Drifty!

Email ThisBlogThis!Share to TwitterShare to FacebookShare to Pinterest
Posted by Yastreblyansky at 11:26 AM Labels: bad writing, contempt for the working class, David Brooks, sociology, tacos