Annals of Derp: Brooks Stabs at an Answer, Answer Fights Back

Happy Independence Day! Here's former New York Times columnist David Brooks to celebrate by swallowing 50 hot dogs' worth of American history in ten minutes, without once mentioning any of the things we traditionally think about on the Fourth of July, like self-evident truths, or letting facts be submitted to a candid world, or fireworks.  Instead he wants to know, "What's the Matter with Republicans?", in the context of the fact that as Trump and the Republican Party work to take away benefits from the American working class, Trump's base of 40% or so remains faithful to him and Republican candidates win special elections in Kansas, Montana, Georgia, and South Carolina:


What’s going on? Why do working-class conservatives seem to vote so often against their own economic interests?
Let's see, how can we think about this question without addressing any of the discussion that has taken place since Thomas Frank asked it 13 years ago? I know! Put it down to the good old frontier ethos!


My stab at an answer would begin in the 18th and 19th centuries. Many Trump supporters live in places that once were on the edge of the American frontier. Life on that frontier was fragile, perilous, lonely and remorseless. If a single slip could produce disaster, then discipline and self-reliance were essential. The basic pattern of life was an underlying condition of peril, warded off by an ethos of self-restraint, temperance, self-control and strictness of conscience.
Which is going to explain, sure as my name's not Barry Goldwater, why working white folks even today are rugged individualists who prefer to do things on their own, not trusting government assistance, as when the federal government started acquiring vast amounts of land from 1803, setting up territorial governments, subsidizing river, lake, and canal transportation and railroads, pushing out the postal service, and finally giving away land titles starting with the first Homestead Act passed by the Lincoln administration in 1862. And land grant colleges for people who work with their hands, as Thornton will remind you. "Oh, don't bother, Mr. Pointy-Headed Bureaucrat, we don't need any of that stuff" said the citizens, not.

Virtually all of the United States was at the edge of the frontier at some point during the 18th and 19th centuries, and we've been told repeatedly ever since Tocqueville that frontier life required collective action, from barn raising to the posse comitatus, and the whole wealth of political institutions that seemed to spring into existence, Tocqueville suggested, the moment somebody started building a house in the wilderness. Here are Tocqueville and Beaumont in Pontiac, Michigan in 1831: 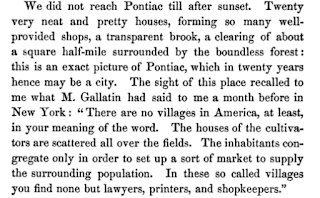 ("As much of frankness and simplicity as that of a Norman horse dealer," if your snark meter was off, means zero.)

Compare Brookstopia, where civilization evidently started with the imposition of an "ascetic" or at least prohibitionist church:


Frontier towns sometimes went from boomtown to Bible Belt in a single leap. They started out lawless. People needed to impose codes of respectability to survive. Frontier religions were often ascetic, banning drinking, card-playing and dancing. And yet there was always a whiff of extreme disorder — drunkenness, violence and fraud — threatening from down below.
Pretty sure that whole picture will prove to be Radio Yerevan–level false. Early gambling prohibitions certainly focused on the already-Puritan settlements in Massachusetts, no longer frontier by 1700, and colonial governments raised money with lotteries; gambling was pervasive everywhere else, and alcohol pervasive absolutely everywhere (those apples with which John Chapman seeded the new land were for applejack). Elijah Craig, a Kentucky Baptist minister, invented Bourbon whiskey in around 1789, and the Southern Baptists used grape wine for communion well into the 19th century, some right up to the passage of the Volstead Act.

Prohibition movements on these vices didn't begin until the 1830s and 1840s, long after the start of the Second Great Awakening, and while they were certainly inspired by Methodism, it wasn't the camp-meeting Methodism of the frontier (where people danced during services) but the socially conscious urban reforming kind, essentially of what we'd now call the left, directly connected to abolitionism.


The virtues most admired in such places, then and now, are what Shirley Robin Letwin once called the vigorous virtues: “upright, self-sufficient, energetic, adventurous, independent minded, loyal to friends and robust against foes.”
In Letwin's The Anatomy of Thatcherism (1992), on what that working-class frontierswoman Margaret Thatcher did to "achieve a fundamental realignment in British politics" by "promoting a moral agenda rather than an economic program or a political theory",  in which the "vigorous virtues" are proclaimed as an abstraction from Thatcher's actions, not their philosophical background, which arises not from some centuries-old cultural disposition but by "the response of [Thatcherism's] founders, above all of Mrs Thatcher herself, to the condition of Britain as they saw it." Though influenced by a couple of 20th-century figures, Friedman and Hayek. The word "frontier" is, needless to say, not used anywhere in the book.


The sins that can cause the most trouble are not the social sins — injustice, incivility, etc. They are the personal sins — laziness, self-indulgence, drinking, sleeping around.
Then as now, chaos is always washing up against the door. Very few people actually live up to the code of self-discipline that they preach. A single night of gambling or whatever can produce life-altering bad choices. Moreover, the forces of social disruption are visible on every street: the slackers taking advantage of the disability programs, the people popping out babies, the drug users, the spouse abusers.
If "sleeping around" is not a social sin, you're doing it wrong, David.

As to "people popping out babies", that's certainly not very considerate. "Slackers taking advantage of the disability programs" is an example of Brooks's nourished compassion for the victims of the opioid crisis, and we can see how he's fallen, here, into his White Working Class story of the Trump voter, with his extreme moral rigidity just like Margaret Thatcher's and inability to follow its precepts. As exemplified by


a friend who is an avid Trump admirer. He supports himself as a part-time bartender and a part-time home contractor, and by doing various odd jobs on the side. A good chunk of his income is off the books. He has built up a decent savings account, but he has done it on his own, hustling, scrapping his way, without any long-term security. His income can vary sharply from week to week. He doesn’t have much trust in the institutions around him. He has worked on government construction projects but sees himself, rightly, as a small-business man.
(The innovative styling of "small businessman" demonstrating once again that Brooks's prose puts copy editors into a catatonic state.)

"Friend" or maybe contractor, because I'm sure there was some work he wanted to do on the $2-million house on Capitol Hill that he bought in March, with "a hip pool and area for cool summer cocktail parties". In any case, he does see himself rightly as a small businessman because he is one, and he's not working class (Brooks obviously confuses class with educational status, which is one of the reasons he's so exceptionally clueless on this point of the Trump voter).


In their view, government doesn’t reinforce the vigorous virtues. On the contrary, it undermines them — by fostering initiative-sucking dependency, by letting people get away with their mistakes so they can make more of them and by getting in the way of moral formation.
Say the stern-minded poppers of babies and pills (or, more likely, their fathers-in-law).


In her book “Strangers in Their Own Land,” the sociologist Arlie Hochschild quotes a woman from Louisiana complaining about the childproof lids on medicine and the mandatory seatbelt laws. “We let them throw lawn darts, smoked alongside them,” the woman says of her children. “And they survived. Now it’s like your kid needs a helmet, knee pads and elbow pads to go down the kiddy slide.”... these voters may vote against their economic interests, but they vote for their emotional interests, for candidates who share their emotions about problems and groups.
Oh, their emotions about groups. Now we're getting somewhere, aren't we. Because Trump country, also known as Republican country since the 1980s, has never been averse to government help, as was proven 80-odd years ago:

The power people didn't like the New Deal and its regulations, whether they were Democrats as then. or Republicans as now, but the masses loved it. It was only when they started being convinced by the overlords that somebody else was getting federal help in some unjust way (Brooks is wrong to thing that people on the frontier don't care about justice or the "social virtues", as he is generally wrong about everything) that they started "voting for their emotional interests." As always, the emotion cultivated in such people by the masters of conservatism is fear, and FOMO. David Brooks was a commissioned officer in the movement, however distasteful he may find that just at present. And Arlie Hochschild herself got the story down pretty systematically.


Hochschild noticed that Tea Party enthusiasts and traditional conservatives gave her accounts of American society that boiled down to a single “deep story.” This story was that America, which was once characterized by hard work, was now characterized by cheating; the image that Hochschild chose was that of people cutting in line. For Hochschild’s subjects, the line-cutters were African-Americans, promoted by affirmative action, she writes, but also “women, immigrants, refugees, public-sector workers—where will it end? Your money is running through a liberal sympathy sieve you don’t control or agree with.” President Obama, in this vision, was the man controlling the line, waving the line-cutters ahead—“their president, not your president.” (Benjamin Wallace Wells, New Yorker)

And everybody knows but David Brooks.