Blessed are the cabinet members...


“I think one of the really interesting things that people are going to see today — and I think it’s something that should be celebrated — is that the president has brought a lot of people into this administration, and this White House in particular, who have been very blessed and very successful,” said Sean Spicer, the White House press secretary. The officials “have given up a lot to come into government by setting aside a lot of assets,” he said.
... for what shall it profit a man if he gain a government job and set aside his assets? Depends what you mean by "set aside". It's going to profit these guys plenty.

Although Mr. Kushner has stepped down from his management positions at the more than 200 entities that operated aspects of the family real estate business, he will remain a beneficiary of a vast majority of the business he ran for the past decade, through a series of trusts that already owned the various real estate companies.
The plan laid out on Friday  “is not sufficient,” said Larry Noble, a former general counsel and chief ethics officer for the Federal Election Commission. “While removing himself from the management of the businesses is an important step, he is still financially benefiting from how the businesses do. This presents potential for a conflict of interest. Given his level in the White House and broad portfolio, it’s hard to see how he will recuse himself from everything that may impact his financial interest.”
Ivanka Trump has a stake of between $5 million and $25 million in the Trump International Hotel in the Old Post Office building on Pennsylvania Avenue, a property leased from the General Services Administration of the United States government. You'll be pleased to learn that Donald J. Trump doesn't have any stake in that any more, which would have been in violation of the terms of the lease, according to which "No member or delegate to Congress, or elected official of the Government of the United States or the Government of the District of Columbia, shall be admitted to any share or part of this Lease, or to any benefit that may arise therefrom," the parties who do have stakes being, since some time in January, DJT Holdings LLC, DJT Holdings Managing Member LLC, Don OPO LLC, Donald J. Trump Revocable Trust, Donald J. Trump, Jr. Revocable Trust, Eric OPO LLC, Eric Trump Revocable Trust, Ivanka OPO LLC, Ivanka Trump Revocable Trust, Trump Old Post Office LLC, and Trump Old Post Office Member Corp., none of which are apparently Donald J. Trump the elder, although Donald J. Trump the elder does have a direct interest in DJT Holdings LLC, and although the Donald J. Trump Revocable Trust (Donald J. Trump, Jr., Trustee, Alan Weisselberg, Business Trustee, and Eric F. Trump, Chairman of the Advisory Board) is required to give the president money whenever he asks for it.

Because the Donald J. Trump Revocable Trust has promised not to give him any money as long as he's president: 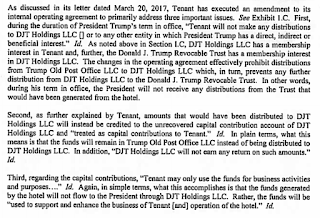 It's going to be a kind of temporary nonprofit for the duration, just sitting there getting richer, except for the money it distributes to all the other parties to the lease, such as his new adviser, Ivanka Trump. So the GSA's contracting officer, Kevin M. Terry, has determined that the terms of the lease aren't being violated, and even gets a little snippy, complaining that earlier GSA reviews

Democrats aren't convinced. These simplistic souls think the GSA has changed its mind since the president took office and a new acting administrator, Timothy J. Horne, was named (Trump hasn't nominated a permanent administrator yet):


"This decision allows profits to be reinvested back into the hotel so Donald Trump can reap the financial benefits when he leaves the White House. This is exactly what the lease provision was supposed to prevent," said Congressmen Elijah Cummings (D-MD) and Peter DeFazio (D-OR) in a statement.

I guess they're just not among the blessed. On the other hand, the hotel is not performing in a totally blessed way:


The International Trump Hotel lost more than $1 million during its opening months, with revenues $2 million less than estimates it provided to the GSA that were published by House Democrats.

Email ThisBlogThis!Share to TwitterShare to FacebookShare to Pinterest
Posted by Yastreblyansky at 10:31 AM Labels: corruption, Emperor Trump