Emo at the Guardian: 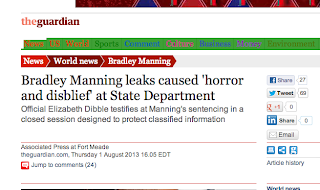 Or maybe laughing so hard they dropped one of the e's. Now they can't find it anywhere.


Dibble said she disagreed with the sentiments expressed by then-defense secretary Robert Gates in December 2010: "I've heard the impact of these releases on our foreign policy described as a meltdown, as a game-changer and so on. I think those descriptions are fairly significantly overwrought."

That's how they are in the Pentagon, calm to a fault. Whereas in Foggy Bottom one lets it all hang out. The exact character and extent of the horror and disbleep, in any event, remain secret, as Dibble gave her testimony behind closed doors.

Goddamn it, Government, you forgot our anniversary again!


Never has been a greater gap btw the character of the governing class and that of our military men and women http://t.co/Go9pZJPNx9
— Jennifer Rubin (@JRubinBlogger) August 2, 2013

You can go to the link, though it is from a right-wing rag: a completely inoffensive and sweet story, about a kind young marine in a small-town charity race who drops behind his buddies—as it turns out, because of a small boy who got detached from his own party and wanted somebody to run with; the marine slowed down and coached him through, thus sacrificing his own chances of winning.

What's wacky is Rubin's immediate reaction to this story as being somehow a fable about government, like, Oh, government, you're too selfish to help a kid preserve his self-esteem in the local Stop Acid Reflux 5K Fun Run. I mean, did you even think of asking government to help out? Her relation to government is like a bad marriage, where they're watching TV together and she's kvetching: "Look at him helping her out of the car. You never help me out of the car. You didn't even notice I got my hair cut!"  What's wrong with these people?


First they came for the employees who were fracking around on the Internet while supposedly at work...

Michele Catalano, a journalist living in Long Island, was appalled to find after the Boston Marathon bombing that she herself had become an object of suspicion: she'd Googled "pressure cooker" and "backpack" one day, and some weeks later there were the jackbooted thugs, sort of:

three black SUVs in front of our house; two at the curb in front and one pulled up behind my husband’s Jeep in the driveway, as if to block him from leaving.

Obviously the Joint Anti-Terrorism Task Force; full of questions about whether the couple had ever taken an interest in building a pressure-cooker bomb and so on. And obviously alerted by the NSA eagerly studying her search history. Why do you suppose they would be studying her search history? Maybe because of her fearless work writing for deathandtaxesmag.com and even occasionally Forbes. You know, first they came for the conservative Long Island freelance writers, and I said LOL, and so forth.

Happily, no. It wasn't the NSA that was studying her search history but, it seems, her husband's boss, or as it happens ex-boss, who was studying his, and began to worry that he might be a terrorist. Demonstrating once again that government may be a pretty crappy friend, but capitalism is the enemy.

Email ThisBlogThis!Share to TwitterShare to FacebookShare to Pinterest
Posted by Yastreblyansky at 9:52 AM Labels: cheap shots, Jennifer Rubin