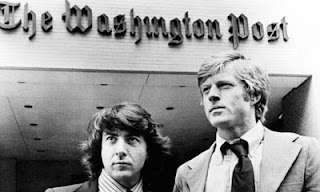 This award goes out to Gary Pruitt, CEO of the Associated Press:

“What I learned from our journalists should alarm everyone in this room and I think should alarm everyone in this country. The actions of the DOJ against AP are already having an impact beyond the specifics of this particular case,” AP CEO Gary Pruitt told an audience at the National Press Club. “Some of our longtime trusted sources have become nervous and anxious about talking to us, even about stories that aren’t about national security. In some cases, government employees that we once checked in with regularly will no longer speak to us by phone, and some are reluctant to meet in person.”
After it was made public that the Justice Department took AP Washington bureau phone records as part of the Obama administration’s aggressive anti-leak operation, Pruitt said the fear among potential sources has spread to reporters from other outlets.

What is this country coming to, anyway? Whatever happened to the part of the First Amendment that guarantees the right of senior officials to dictate newspaper stories? "No law shall be made infringing the access of the press."

Does this mean you Washington guys are going to have to start reporting now, like some bozo stuck in Kabul? Or stay home and read?

Anyway it'll all be better when John McCain's president.

Or maybe not: This (via Digby via Eschaton) is pretty upsetting.


President Barack Obama’s unprecedented initiative, known as the Insider Threat Program, is sweeping in its reach. It has received scant public attention even though it extends beyond the U.S. national security bureaucracies to most federal departments and agencies nationwide, including the Peace Corps, the Social Security Administration and the Education and Agriculture departments. It emphasizes leaks of classified material, but catchall definitions of “insider threat” give agencies latitude to pursue and penalize a range of other conduct....
Employees must turn themselves and others in for failing to report breaches. “Penalize clearly identifiable failures to report security infractions and violations, including any lack of self-reporting,” the strategic plan says.

Then again, it looks like McClatchy managed to worm quite a bit of information out of them! Documents and all.