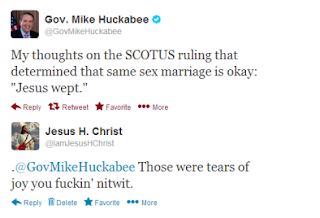 How bad are Samuel Alito's manners?

So bad even Dana Milbank can't come up with an example of how both sides do it. That's historic.

Alito is too visibly expressive. He's like a movie character with an Italian name (Spicoli)? The rule is your face should be a mask? WASP-style?

And this arouses the critics' anti-Italian prejudice. Entschuldigung, Frau Doktor Althaus, but you're the one suggesting Italian-Americans are all guileless children unable to stop making faces at the president of the United States or a Supreme Court justice who happens to be twenty years older than you—not me. I bet James Gandolfini would never have done that. Or Antonin Scalia, for that matter, buffone though he may be.
From CNN's Security Clearance blog:

The U.S. intelligence community says terrorists are trying to change the way they communicate because of what they learned from Edward Snowden's admitted leaks of classified information about government surveillance programs.
"We can confirm we are seeing indications that several terrorist groups are in fact attempting to change their communications behaviors based specifically on what they are reading about our surveillance programs in the media," a U.S. intelligence official told CNN

Oh, thanks for the tip, Mr. or Ms. Unnamed. Are you anonymous because you're not authorized to discuss the matter? Because I'd sure hate to get involved with any of that leaker stuff.

And by the way, what are those terrorists up to? Flying to the US every time they want to send an email, so the NSA can't look?
Ask Krugman:


@Heritage You all were so right about #Obamacare and #immigration reform! Trying for the hat trick of wrongness?
— Yastreblyansky (@Yastreblyansky) June 27, 2013

And thanks for all the rubles, suckers.


During his trip to the Dzhizak region on June 19th, [President Islam Karimov] spoke to the cameras...:
“There are very few lazy people in Uzbekistan now. I describe as lazy those who go to Moscow and sweep its streets and squares. One feels disgusted with Uzbeks going there for a slice of bread. Nobody is starving to death in Uzbekistan....

"Nowadays, scrounging for things in the street is below people's dignity. The Uzbek nation's honour makes it different from others. Is that not equal to dying? Therefore, I call such people lazy because they go there in order to make big money fast, and they are a disgrace to us all.” (uznews.net)

Some of them got a little annoyed, though.


At the present time somewhere between 3 and 5 million Uzbek citizens are working in Russia. In 2012 they sent back to their home country over 6 billion dollars, which is roughly a third of the country’s GDP.
“There is nothing shameful in sweeping streets in Moscow”, says [Moscow-based human rights activist Bakhrom] Khamroev in response to Karimov’s statement. “But when you are treated like a slave, when you are beaten and insulted, even murdered—that’s shameful”. (uznews.net)

Meanwhile, back in New York, our noble old police commissioner admonishes the City Council for trying to put an end to (illegal) racial profiling in the form of the stop 'n' frisk program:


Mr. Kelly sent a letter on Tuesday to each of the Council members, arguing that the profiling bill could be used to force the removal of surveillance cameras and urging them to vote against it. “The bill would allow virtually everyone in New York City to sue the Police Department and individual police officers over the entire range of law enforcement functions they perform,” Mr. Kelly wrote.

What? What? Any scum that feels abused could sue a cop? Any cop whatsoever? It's the end of civilization as we know it!
First they came for us.

Then they started coming for the dangerous guys:

Who says there's no such thing as progress?