As we know, President Obama's counterterrorism adviser, John Brennan, has backed down a little from his claim a year ago that there had been no civilian deaths in drone strikes since 2010:


Brennan was asked about his claim last June that for almost a year “there hasn’t been a single collateral death because of the exceptional proficiency, precision of the capabilities we’ve been able to develop.”

On Sunday, he appeared to qualify his statement. "Well, what I said was that over a period of time before my public remarks that we had no information about a single civilian, a noncombatant, being killed," he said. (Los Angeles Times, April 29, 2012)

Now we've learned from the New York Times how they manage to avoid the information: [jump]


Mr. Obama embraced a disputed method for counting civilian casualties that did little to box him in. It in effect counts all military-age males in a strike zone as combatants, according to several administration officials, unless there is explicit intelligence posthumously proving them innocent. (New York Times, May 29, 2012)

It's like one of those medieval trials-by-ordeal; in the ordeal by droning, they drop a bomb on you and if it kills you that proves you are a combatant, except in those exceptional cases where it doesn't, and where the CIA happens to learn about it. Do we expect the CIA to drop in to the village after every strike to ask? I didn't think so.

They could always read the Guardian, though.


Figures from the London-based Bureau of Investigative journalism show that CIA drones struck Pakistan 75 times in 2011, causing up to 655 fatalities.

The majority of those killed were alleged militants, but as many as 126 civilians may also have lost their lives, the bureau's figures suggest.

Probably that doesn't count as explicit intelligence. I checked out the website of the Bureau of Investigative Journalism, which has a lot, including this chart of total killed by US drone strikes on Pakistan, Yemen, and Somalia since 2004: 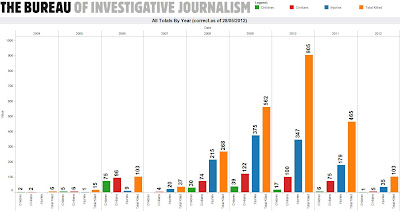 Their methodology is at least more perspicuous than Mr. Brennan's.