There's a weird maneuver going on to make Peter Navarro, the bogus China expert Jared Kushner discovered on Amazon, into a coronavirus hero, on the basis of warning memos he's said to have submitted to the White House showing a prescient understanding of the threat: one from 29 January, which Maggie Haberman/New York Times got hold of—


A top White House adviser starkly warned Trump administration officials in late January that the coronavirus crisis could cost the United States trillions of dollars and put millions of Americans at risk of illness or death.

The warning, written in a memo by Peter Navarro, President Trump’s trade adviser, is the highest-level alert known to have circulated inside the West Wing as the administration was taking its first substantive steps to confront a crisis that had already consumed China’s leaders and would go on to upend life in Europe and the United States.

—and one that's showed up in a piece by Jonathan Swan and Margaret Talev at Axios from 23 February calling for allocation of $3 billion to spending on PPE supplies, development of drug therapies (not mentioning hydroxychloroquine, which Navarro has recently been pushing)  and vaccine, and Covid-19 testing, which the article claims Navarro wrote, but permit me to express my doubts on that subject, because no actual evidence that he did is offered, beyond Axios's assertion.

For the Record: What's Wrong With Journalism?


Had an interesting back and forth with the artist formerly known as Thornton over a thing about journalism, whether we can manage to agree about it or not—where we do agree that "objectivity" and "impartiality" are bad ideas, but I insist it's not a bad thing for a newspaper to make an effort to be truthful, and he says look at the great old days when journalism knew what kind of business it was in and pleased its partisan readers and I say yeah and competed to help the imperalist swine start the Spanish-American war ("You supply the pictures, Mr. Pulitzer...") and so on:

Links to this post
Email ThisBlogThis!Share to TwitterShare to FacebookShare to Pinterest
Posted by Yastreblyansky at 1:10 AM No comments: Labels: capitalism, ethics, journalism

Literary Corner: Our Bodies, Our Shelves

This is apparently a comment on Jared Kushner's interesting statement explaining why the federal stockpile of medical products shouldn't be distributed to the states that need them:


"The notion of the federal stockpile was it's supposed to be our stockpile. It's not supposed to be states' stockpiles that they then use," he said. "So we're encouraging the states to make sure that they're assessing the needs, they're getting the data from their local situations, and then trying to fill it with the supplies that we've given them."

Which seemed so peculiar, because, you know, where is the place that isn't in the states where it's meant to go?

Links to this post
Email ThisBlogThis!Share to TwitterShare to FacebookShare to Pinterest
Posted by Yastreblyansky at 11:44 AM No comments: Labels: Covid-19, delusionality, Emperor Trump, incompetence, Jared Kushner, Literary Corner


A nice column by Paul Waldman at WaPo ("How this crisis could help us get to health-care reform") asks a question I've been thinking about a little bit, whether the pandemic crisis might not stimulate us in in the US to do something about the inequities of our health care system. It's easy for rightwingers to say that socialized medicine in Italy and Spain is proving just as ill equipped to handle the logistic demands of the thing as our marketized approach is, but what can't be denied is that we're going to have a much harder time paying for it, as Waldman says:

untold numbers of people are going to get huge bills from being treated for covid-19. Insurance companies made a big deal about waiving cost-sharing for coronavirus tests, but if you get it and have to get treated, you could still face thousands of dollars in costs, especially if you have a high-deductible plan of the kind that has proliferated in recent years.

The number of people facing those costs will be enormous. As bad as the virus has gotten in some other countries, that’s one thing their citizens don’t have to worry about.

Not necessarily doing something nefarious, but how would you know? 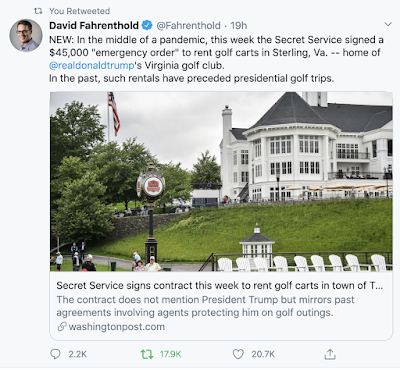 Sterling is closed (as you'd imagine) until at least 30 April. Is he going out there on his own or with some "friends" and his $45,000 worth of golf carts to an otherwise closed course, like Chris Christie going to the beach during the government shutdown of July 2017? Will there be caddies, and will the kitchen at the 19th hole open up to prepare snacks?

Why is my first thought about the money?

Links to this post
Email ThisBlogThis!Share to TwitterShare to FacebookShare to Pinterest
Posted by Yastreblyansky at 10:50 PM No comments: Labels: corruption, Covid-19, Emperor Trump, Jared Kushner

For the Record: A note on passion and politics


I'm a passionate Democrat and believer in democracy. I don't believe in personality cults and Great Men but in broad political movements. There are reasons the party majority is choosing this guy I haven't been crazy about and I'm starting to understand them. It's a good choice.
— Leaves of Yas (@Yastreblyansky) April 2, 2020

That godlike charisma thing that John Kennedy and Barack Obama had is a valuable thing in electoral politics, and of particular interest to the young male voter (the same population sector that lets itself get recruited into war fighting), and apparently Senator Bernard Sanders has some of that too, though it's hard for me to see, since I've been around people like him all my life, as I've pointed out before, but it has its limits, especially, in the American system, in the way it doesn't carry over into those midterm elections like 2010 and 2014, if only because the young male voter really can't be counted on to remember to vote. And it's not the only effective way of rousing politically effective emotion.

Biden has that ability to convey the impression that, as James Clyburn said, "He knows us," or he really does know us, as the case may be. Either way, he worked it brilliantly in two presidential elections as Obama's deputy, and he seems to have been working it pretty well in this year's primaries up until the appearance of the plague brought it all to a kind of standstill where we feel too shaken to understand what's going on.

For the Record: Quinine

Dustup on me criticizing the First Pharmacologist in the White House:

Why would it be important to broadcast what he says? He has no useful information. He's been consistently out of the loop and out of his depth, often spouting dangerous falsehoods that have even killed people (like his nonsense about choroquine).
— Leaves of Yas (@Yastreblyansky) April 1, 2020

Links to this post
Email ThisBlogThis!Share to TwitterShare to FacebookShare to Pinterest
Posted by Yastreblyansky at 10:18 AM No comments: Labels: Covid-19, drugs, Emperor Trump, lies, propaganda

Literary Corner: We've All Learned Something

Emperor Trump has composed a kind of David Brooks tribute in the effort to clarify how lucky people are to have this pandemic on his watch. I'm not even kidding.


What Life Should Be
by Donald J. Trump

The people of this country have been
incredible with social distancing

I'm getting letters
from people that
"I've found my family again..."

and they're not going out
and a lot of things
are happening and they're
writing me, "We've found
what life should be."


Big strong letters with tears streaming down their faces saying, Sir, thanks for mishandling the coronavirus, this extra time we're spending in social isolation is giving new meaning to our lives.

And Donald too shy to tell us how much he's enjoying himself away from the golf course—on his stomach in the family room playing board games with the kids, and helping Melanie out (you can imagine how fetching in her little apron) with complex Slovene baking projects that fill the East Wing with intoxicating fragrances.

Links to this post
Email ThisBlogThis!Share to TwitterShare to FacebookShare to Pinterest
Posted by Yastreblyansky at 6:40 PM No comments: Labels: Covid-19, delusionality, Emperor Trump, Literary Corner


If you've been making yourself crazy with fear over your failure to accomplish the impossible—washing every piece of clothing after each wearing, or disinfecting the shopping bag and wiping down the boxes and bottles before you put them in their cupboards, or washing lettuce with soap, or treating the whole house as if it was a restaurant kitchen, I've got some hope to hold out that it doesn't have to be quite as hard as it seems, from the esteemed chef and writer J. Kenji López-Alt, who's been writing recently on Covid hygiene and showed up for a radio interview with Francis Lam this morning of which the text and audio are here: Food in particular is pretty strongly unlikely to be in and of itself a problem.


FL: But, there is a theoretical risk anyway of touching stuff that a sick person might have sneezed on and then getting that into our system. Given that, it does sound like food could be a way of getting infected, right?

JKLA: Well, it is a novel virus like you said. We’re still doing research on it. There’s always a possibility, of course, but what we do know for certain is by far the majority of cases – in fact every case we’ve found so far or every case we’ve tracked so far – none have been linked to food or packaging or any kind of fomite is what it’s called, when it gets on something, gets on a solid object and is transferred to a person that way. All of the spread patterns we’ve seen have been based on aerosolized or droplet forms. Basically, when someone sneezes or coughs or breathes very moist air, viral load can get into that moisture, into the air, and you would breathe it into your respiratory system, into your lungs. That’s the main mechanism of transfer, which is similar to how previous coronaviruses like SARS and MERS were spread as well. Again, with those, neither one of them showed any signs of foodborne transmission.

Links to this post
Email ThisBlogThis!Share to TwitterShare to FacebookShare to Pinterest
Posted by Yastreblyansky at 8:33 PM No comments: Labels: Covid-19, food, hygiene, restaurants 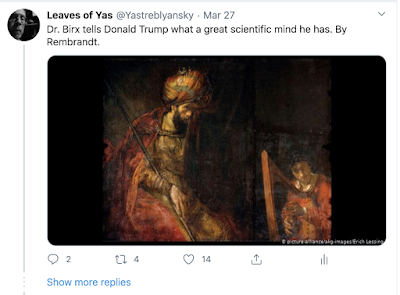 
"[Trump is] so attentive to the scientific literature & the details & the data. I think his ability to analyze & integrate data that comes out of his long history in business has really been a real benefit” -- this is shocking, hackish stuff from Dr. Birx. pic.twitter.com/c2phsRYaJs
— Aaron Rupar (@atrupar) March 27, 2020


President Trump, on how he found out from President Xi Jinping (rather than, say, members of the White House coronavirus task force) that the rumors are true—younger patients don't generally get as sick from Covid-19 as older ones do (text via RealClearPolitics):